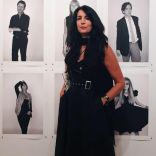 For an artist who has only been in South Florida for a few years, Sri Prabha has made a stellar impact. He has created major installations outdoors on museum walls, been in several group and solo shows and won Best Visual Artist from the Broward New Times last year. His spellbinding work is unclassifiable though he uses photography, video, painting and found objects to create environments that viewers are able to project whole worlds onto.

“I want my art to be inclusive, to engage everybody on their own terms,” he says in his sunny art filled home studio. A visit to his house is like being in one of his installations as video art in lightboxes swirl with colors and rotating shapes on the walls, paintings line the hallways and numerous objects – glass domes filled with bones and fossils and rock prop themselves on the coffee tables.

“I don’t use people in my art for a reason, because then it represents something specific, it becomes THAT. My characters are nature, space, elements. I didn’t jive with art school because it had a certain philosophy. I did agree with the Dada School which connected to installations, freewheeling thought, disconnection from reality and connecting with universal consciousness. In my work it’s more important how it makes people feel and when they are in the installation it completes the work.”

Sri Prabha was born and lived in India for a few years before relocating to the US, earning a master’s degree in clinical psychology at Argosy University near San Francisco, where he lived before moving to Florida in 2013 with his wife.

“I think my degree in psychology has helped me to connect with people through my art. I’m interested in how things make you feel and also visually by science fiction, mandalas and Hinduism, Mayan cultures and circular symbols. I like Flash Gordon too,” Prabha says with a laugh. “India inspired my color palette with it’s rich symbols and gods. I was inspired by music in the 70s like Kraftwerk and shows on the BBC radio. I sometimes feel like I am creating a new language as I want the art to be useful to people. Moving here I immediately started connecting with artists groups and studios, finding a support network that led to meeting curators and getting shows.”

One of these curators was Jane Hart, then curator at Art and Culture Center of Hollywood who immediately gave Sri Prabha a show at the Center and another at her 100 Degrees in the Shade Gallery in Miami’s Design District where he took over a glass enclosed office in the back of the gallery. In the office he made a new installation called The Night Lands that fused four video projections with paintings and photos. The trippy room also had sound he created, a warm throbbing hum that reverberated throughout the rest of the gallery. I ran the space as Director for four months and turned the installation on and off every day, feeling slightly hypnotized by the soundtrack and glow of the room. Gallery goers were drawn to the room and its womb like aura.

“Having met Sri, I was very taken with his overall interest in the intersection between art, science, and metaphysical concepts,” Hart says.” I’m especially impressed by his ability to thoroughly activate spaces through the use of various media and objects, creating a truly transcendent, multi-sensory experience. I see limitless possibilities for Sri to do even larger scale installations and public art projects, given the opportunity and resources.”

His website says his art is about “Synthesizing the possibilities across ecology, geology, and science. Conscious and subconscious connections are visualized through art as a conduit to the interconnected cosmos,” but it’s really about awe and wonder and curiosity.

At a recent panel at the Armory Art Center in West Palm Beach curated by Elle Schorr, Sri Prabha showed slides and videos that included some of his current inspirations. He spoke about the new worlds that are being discovered all the time, about the black holes in the galaxies that actually bend time when you go down in them. One of the video he screened was of a little lunar lander that NASA had shot into space to land on a comet and beam back info. Watching this small man made spidery thing bounce around on the surface and struggle to secure its little feet amused him to no end.

“You start projecting feelings onto this metal object that’s so far away, you root for it to connect in the cosmos and finish its mission. I include astronauts and monkeys in space suits in my art – the only figures I use. They are guides for both the past and the future  – sometimes I feel like the man, sometimes I’m the hapless monkey. It’s humbling to just look at the stars.”

After his hour long talk inside the Center, Sri Prabha surprised the group by leading us outside to a back courtyard where he had projections set up against three of the walls. When the skies opened up and a deluge of rain came down, it actually made it all more beautiful as the rain slicked palm trees and walls and even the raindrops themselves reflected the projections in a rainbow of colors.

To add to the drama Sri had brought a pack of fireworks and had each of us set one down and light it up in the courtyard, oohing and aaahing as the sparklers and firecrackers popped and exploded in the rain. The Center provided champagne and the night turned into a full experience of art, wonder, flash and awe. For more information on Sri Prabha, visithis website: www.sriprabha.com