SunFest 2015 on Friday was Packed with Entertainment

The second day of SunFest arrived for the most faithful fans and this year with a very peculiar lineup, quite different to previous years. Walking towards the Tire Kingdom stage, an older crowd gathered showcasing their love for SunFest because through the years, many of the most popular bands of the 80’s and 90’s has passed by that stage and this Thursday (April 30) the Red Rocker, as Sammy Hagar is also known as, would perform with his band.

Jonnie Morgan Band and the world-and-Latin-music-inspired Rico Monaco Band preceded Sammy Hagar‘s performance. Sammy himself put on a show that made many of us in our 40’s look like we were back in the years Van Halen’s ex-lead vocalist had us rocking to Why Can’t This Be Love? By the way, Rico Monaco Band jammed it with unrestrained imagination; oh boy, they were great!

Sammy Hagar and the Circle who belted out some of Van Halen’s biggest hits in the ‘80s and ‘90s, enriched hard-partying revelers who by the most part were shaking theirs heads and jumping up and down, though holding on to their cold beers all the time.

On the other hand, around the north side of Flagler Drive where Ford Stage stands, a mix of teenagers and young fans were seen holding signs, sporting T-shirts and dressing like the iconic Paramore’s lead singer Hayley Williams. A first step for festival revelers towards achieving Hayley’s level of coolness is dressing like her: “Heart print button up shirts, Topshop Knitted Rib Textured Jumpers, Silver Metallic Short Shorts, and a lot of Tights & Leggings“.

True fans of Paramore know that Hayley likes to layer her hoisery and that she rarely wears shorts or skirts without some sort of hosiery underneath. Had she walked along Flagler Drive before her performance, she would have been in awe seeing how West Palm Beach fans at SunFest were parading around the festival, looking amazingly like her.

Her words received a loud ovation when after singing “Still into you” as her opening song, she thanked everyone who showed up to support the bands’ music and for just “being there where it mattered to be, on the side of good music and good people” as she said. Paramore even rewarded West Palm Beach with brand new songs of their current tour.

This is exactly what you love about SunFest. In just less than a square mile you find yourself in the midst of a festival with an iconic entourage that gives everyone a chance to delight in whatever entertainment pleases them the most during a 5-hour span of music, games, food and friendly chats over cold beers or the legendary Captain Morgan.

And it looked like this a few minutes later on.

Though the party barges seemed a little empty this Thursday, the three spots occupied by ESPN, 97.9 KVJ Show and WILD 95.5 were going down with eclectic mixes of today’s greatest hits in a way that seemed to warm up for what might seem to be an incredible house music party on Friday evening when Kaskade hits the stage.

On regards to the food being served at SunFest this Thursday, the Queen of the fruits took away the grand prize. Tropical Cafe was serving Pineapple with Chicken and Shrimp mixed with yellow Pilaf rice and coconut. A delicious treat that screamed summer all along, specially cut out for the occasion of SunFest. Hey, a grilled pineapple is something to die for and this combination of the pineapple with spicy shrimps stirred in coconut and rice was the energy needed to keep on dancing all night long. 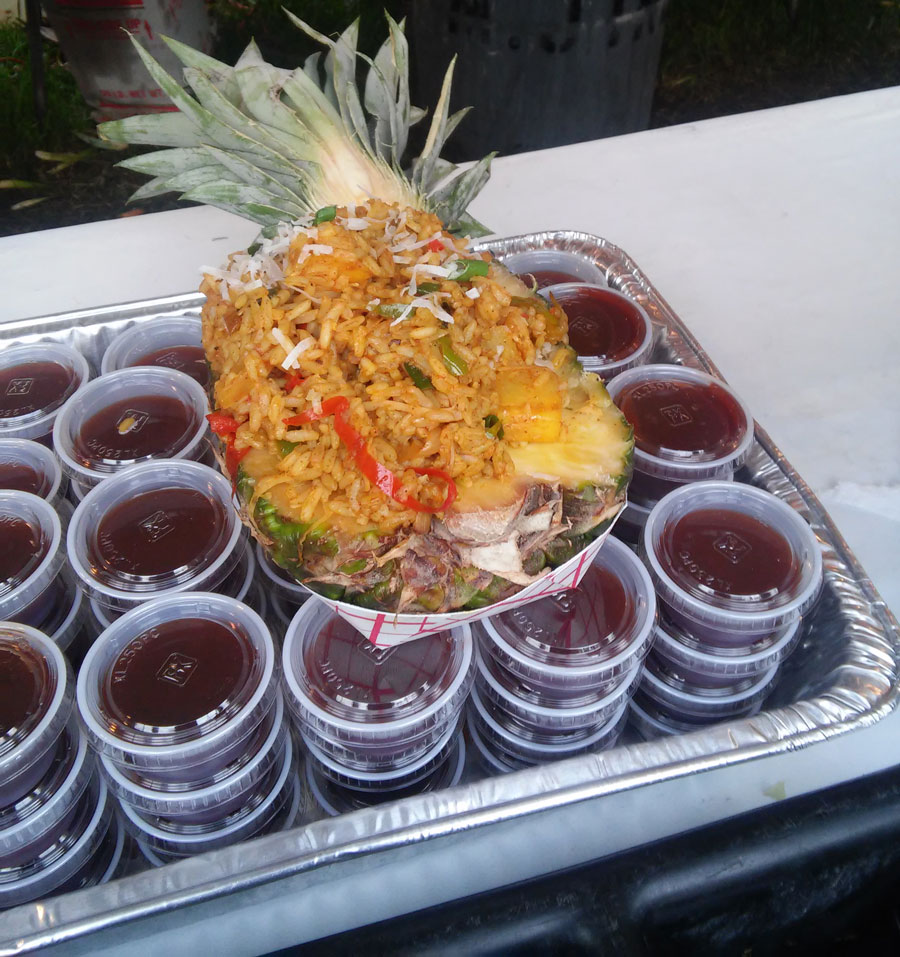 This Thursday April 30 was SunFest 2015 Day 2 – The Battle of the Ages – as a patron dubbed it earlier on out loud to a string of people getting ready to enter the event. This is what proves that our art and music festival by the waterfront is really popular among all ages and still a fan favorite in Florida.

SunFest 2015 on Friday was Packed with Entertainment

Coming to the stage at SunFest is Lenny Kravitz

Get Pumped for SunFest 2015