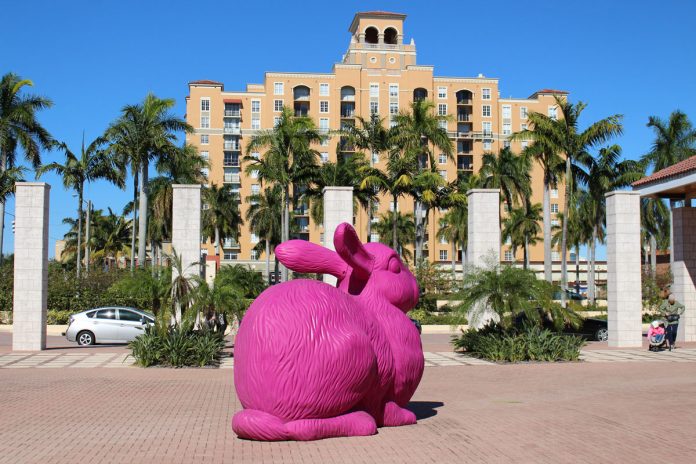 Cruising into high season, the 2016 Art Palm Beach took the Convention Center by fashionable storm since opening night. The Art and champagne loving crowd poured into the booth-filled hall. Giant snails and bunnies greeted the masses out front. The immediate reaction was this year’s show was laid out more elegantly, with furniture and design booths strategically placed and the bar café was plush and easily maneuvered. The people-watching was out of this world, with women draped in furs and jewels and outlandish footwear. A few committed souls wore hand painted clothing, kooky hats and chain metal dresses.

Local artist and footwear fetishist Dana Donaty debuted her Star Wars shoes, a stroll defying pair of shoe boots with dual colored characters for heels – one side was a white helmeted Stormtrooper, the other side black clad Darth Vader. The Force was strong with this one.

I had recently met internationally exhibited artist Frank Hyder, and was excited to see his Janus Project, a series of air-filled huge painted heads that reference the Moa of Easter Island and Janus, the Roman god of new endeavors. The heads and Hyder made a tour of Europe’s coast thanks to Norwegian Cruise Line which plopped the pop up heads down at various ports of call much to the delight – and sometimes horror – of the public and the police. The heads carry a message of goodwill or whatever else viewers bring to the confrontation.

It was interesting to see how some galleries went above and beyond to alter their booths into something more than just a white walled blank space to hang art. Leila Mordoch Gallery of Miami exhibited French graffiti artist L’Atlas and the Phosphenes series, a collection of L’Atlas’ works made with fluorescent paint and illuminated with ultraviolet (UV) lights. The booth glowed like a 60s nightclub with graphic art that undulated under ones gaze. Beautiful and trippy.

I loved the delicate intricacy of glass artist Christina Bothwell, whose figures of deer and children had an inner spirit that glowed. Christina says “In my work I am drawn to the processes of birth, death, and renewal. What lies below the surface fascinates me and I try to capture the qualities of the “unseen” that express the sense of wonder that I feel in my daily existence. I am attracted to glass because it can do everything that other sculptural media can; in addition, it offers an inner space and transmits light.

My subject matter includes babies, animals, and children as they embody the essence of vulnerability that is the underlying theme in my work. Currently I am exploring metamorphosis as a topic, and have been incorporating figures within figures in my pieces. Within each glass figure there is a smaller figure seen through the surface of the glass.”

Art Synergy had a big crowd around the booth all night, thanks to clever curating and lots of locals flocking to see their work and the work of their peers. Organizers Rolando Chang Barrero and Craig McInnis head up Art Synergy, this is their third year hosting a booth at Art Palm Beach and coordinating other events throughout the week. They had a wealth of work on view from knockout paintings to sculpture. In collaboration with Art Palm Beach, the group will produce more than 65 exhibitions throughout the nine Palm Beach County Art Districts in January during Art Palm Beach week. The nine art districts they will be hosting at are Antique Row, Artists Alley Delray, Boynton Beach Art District, Lake Park and North Palm Beach Art District, Lake Worth Arts, Northwood Village, West Palm Beach, and Worth Ave.

Another event they host is  CONTINUUM, a pop-up art exhibition by Art Synergy in the Arts & Entertainment District in downtown West Palm Beach that will be open until Jan. 30th at a new space on Clematis Street next door to Respectable Street Café. This is really becoming a major art block, with street art murals, galleries, and the local hot spots Subculture Coffee and Longboards and Hullabaloo.

I was totally struck by the work of Erin Fromkes, a majorly talented painter sculptor, who has suffered with various ailments including a long undiagnosed case of Lyme disease that has left her bedridden for long stretches at a time. But she uses that time in miraculous ways, creating wild outbursts of paintings and painted “swag” like headdresses and gowns. He work likens itself to representing invisible illness, and advocating awareness through art and fashion. She says leaving the house is sometimes a victory. At the opening she was decked out in painted jeans and sported a paint splattered crown and had a terrific large painting on display. In the window at the Clematis Street space she presents a painted dress with spoons and a necklace of prescription pill bottles. A green head is impaled with a skull of daggers and keys and syringes and jewels.

She brings to mind the tortured work of Frida Kahlo who painted intense and painful self portraits from her bed, her head encircled in flowers and ribbons. There is also shades of the secret iconography and bold color slashes of Jean Michel Basquiat. Quite a body of work for someone so ill and a real standout at the Fair.