A joyful new mural has sprung up on Flagler Drive, a work of abstraction with echoes of modernist mid-century Latin art. Painted by Brazilian-born contemporary artist Amauri Torezan, his work explores the dynamic between colors and forms in people’s lives, and how that can trigger memories through visual language.

In his bright work, the fluid geometric shapes and lines dance around each other filling the space and making the eye travel. The contrasting bold colors create a sensation of life that occupies the space between urban and nature.

“I believe I was born an artist,” he says from his studio. “At 8 years old I was drawing and painting my favorite cartoons and representations of things I had in my mind. My mom would be talking to someone and I was going to be drawing whatever she was talking about. She was always impressed with how I could do that and decided to take me to take art classes in an artist’s studio. I lasted one day, as the students—all of them older than me—were learning how to draw with graphite using rulers and compass, it was too gray and too boring for me. All I wanted was to express myself with colors using my own free gestures.”

As he grew into his aesthetic he discovered more outlets. 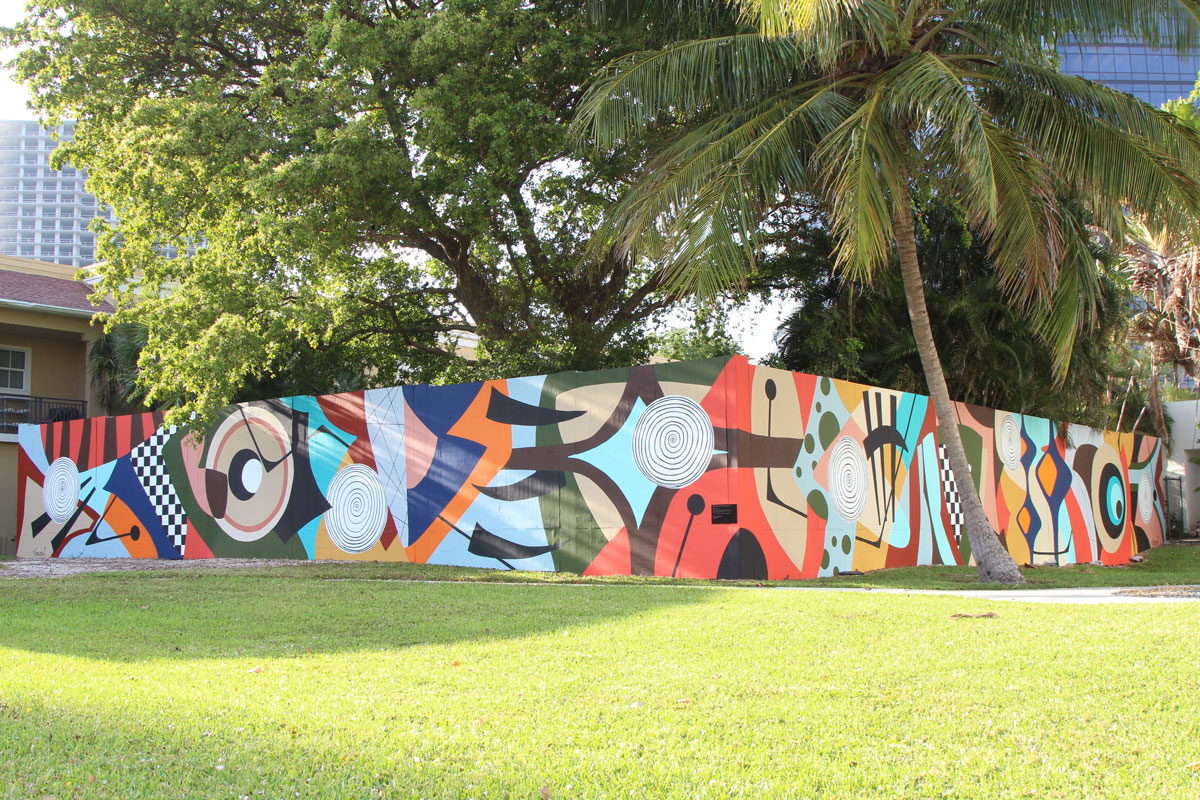 “Later as a teenager in the 80s I was involved in the skateboard culture painting skateboard decks, t-shirts, sneakers, and some graffiti, but the word artist wasn’t part of my world, I was just acting naturally I guess.”

As an adult, he began creating as a hobby a series of surrealist portraits mixing the techniques of pouring paint and photo collage. This led to a show.

“When a couple of friends that had a gallery said they would like to show those pieces, it was then I had my first gallery show. Since then I started educating myself in art history, and training as a painter following my interest in abstract art produced in the ’50s and ’60s.”

As the years passed he “ended up developing my own visual language, that would allow me to evolve in different types of media such as painting, sculpture and large scale murals. When I noticed, my work was being included by curators in museum exhibitions, art galleries, and international art fairs. I actually never thought I would become a professional artist, it just happened very naturally.”

He says his art is all about the interrelation between colors and forms, and how it affects us as people.

“I create mostly full abstractions which means it does not intend to represent anything recognizable, instead, it creates an aesthetic experience that goes beyond the conscious mind, one that stimulates feelings and emotions related to memories stored in the viewer’s subconscious mind. I intuitively combine shapes and lines with contrasting bold colors incorporating elements of geometry and optical illusion to create abstract compositions.”

He was selected by the Art in Public Places of The City of West Palm Beach to be part of the project “The Commons: 15 artists 15 Spaces”. He had the option of choosing the space he wanted to work at and chose the location at Flagler Dr. and 3rd Street because of its landscape.

“My idea was to paint this 140-foot two wall mural, integrating my art to the site’s natural elements such as trees, grass, blue sky, and all the life around it, to create an outdoor fun and colorful area where people can relax their minds in this crazy pandemic times. With this in mind, I named this piece “Place Like Paradise’.”

As for the near future, he just finished a commission for a corporate collection, and has been in the studio developing a new series of shaped canvases, and preparing for upcoming exhibitions in Province Town, MA, and Kansas City, MO.

Torezan has painted monumental murals in the Wynwood Arts District and the luxury hotel The Dalmar. His studio works have been exhibited at The Baker Museum, Coral Springs Museum of Art, and international art fairs.

Torezan’s artistic collaborations include public art projects and partnerships with brands such as the Swiss watchmaker Tag Heuer.

His art is part of collections in the USA, Europe, and South America.