The weather is downright perfect on gorgeous Worth Avenue in downtown Palm Beach, so taking an art stroll is in order. Aside from the tree and decorations, the windows of the luxury stores go all out on showcasing the jewelry and designer clothes, often using art as an inspiration. Tiffany, Chanel and Ralph Lauren have especially beautiful windows this year with twinking diamonds, trademark twists on tweed suits and Americana luxe wear at it’s finest.

The galleries are packed with great art shows to see in Palm Beach, two that caught my eye are at photography mecca Holden Luntz and at contemporary art goldmine Gavlak.

Since fashion is such a presence on Worth, it’s fitting that Holden Luntz has a group show of some of the world’s top fashion photographers. As Cecil Beaton said in 1975, “It is up to the fashion photographer to create an illusion. In doing so, he is not behaving with dishonesty, but when properly invoked, the result is not merely an illusion; rather, it makes the observer see what he wishes to see.”

Fashion photography often crosses into the realm of high art and has generated some of the most widely recognizable, provocative, and enduring imagery that exists. The genre presents an idealized and dreamlike vision of people and situations that allows viewers to escape into the picture and enter a rarefied world. Photographers’ emphasis on fashion’s desires and fantasies underscores the medium and lends itself easily to the exclusivity associated with style and celebrity. Fashion images are also a mark of the times, as fashion mirrors what is currently happening with the economy and society.

Producing dramatic and elegant images, Cathleen Naundorf creates fashion photographs in dream-like settings with an elegant and Old World aesthetic. The use of animals and the large scale becomes an almost diorama effect. She works with large-format Polaroid cameras to capture dramatic, unique haute couture designs from the archives of haute couture houses Chanel, Dior, Valentino, Lacroix, Armani, Saab, and Gaultier. As the artistic director for each of her shoots, she develops the concepts herself and constructs interesting “mise-en-scenes” inviting viewers to enter a rare air atmosphere of almost painterly elegance.

With a career spanning decades, Clive Arrowsmith is a master of lighting and composition in his fashion images and celebrity portraits working equally in both black and white and color. He lends a sometimes psychedelic and hallucinogenic allure to his photographs suiting a mood of fantasy and beauty. As a part-time “rock ‘n’ roller” attached to the music scene, Arrowsmith has conjured up fresh images through their spontaneous quality. He has worked extensively for Vogue, Harper’s Bazaar, Vanity Fair, and Esquire and is the only photographer to have photographed the infamous and racy Pirelli Calendar two years in a row. 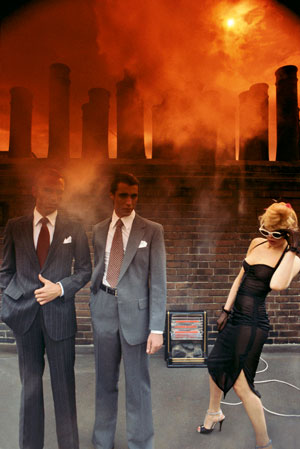 Having made himself a name with his fresh and theatrical take on fashion in the 1960s, Jim Lee is the “original wild child of fashion photography.” He took photo shoots out of the rigid studios and placed them in a story context changing the course of the fashion genre. The striking and sometimes controversial photographic style that centers on a narrative with a cinematic quality meant complicated set-ups and ambitious outdoor productions resulting in dramatic imagery, often using newsworthy scene like downed planes and wildly colored clothes.

Arthur Elgort has spent a lot of time in South Florida shooting photos because he was one of the first photographers to show models in a more natural state wearing little makeup and posing in outdoor settings. He has a stylistic freedom that allows the spontaneous energy and joy of the moment to be expressed by creating disarmingly warm images. Elgort has captured now-famous images of supermodels such as Christy Turlington, Naomi Campbell, and Kate Moss among others for magazines and fashion campaigns including Vogue where he has worked for over 40 years.

New York and Vienna-based artist Judith Eisler has a lush show of paintings through Feb 6th at Gavlak. The exhibition features five oil-on-canvas works inspired by a scene in the 1919 Cecil B. DeMille film Male and Female. The paintings take as their subject the actress Gloria Swanson, who at the moment of depiction is caught in a dream state. Trapped on an island in the film, Eisler’s works depict Swanson as she imagines herself apart from her situation, in another fantastical space.

Inspired by the self-possessed power of the actress, Eisler became interested in capturing this particular scene, as it portrays Swanson in an in-between space – physically rooted in her surroundings, but geographically dislocated and poised to flee, and mentally adrift in her own thoughts.  Though Eisler often takes inspiration from cinema, these works reflect a migration from her traditional composition, and see her focusing on a single image rendered in various colors, rather than on a sequence of events.

Typically interested in the way a subject moves through an architectural space, Eisler creates works that features just the face or a cropped portion of her subject’s body. Here, we see Eisler meditating on the landscape as a whole, and the way in which a figure at rest can still convey movement. By creating replicas of the same image, but applying a different monochrome palette to each one, Eisler was able to turn a close eye to the nuance of the figure’s movement, and the way in which the figure itself became a veritable extension of the landscape.

Light is central to Eisler’s practice, and she has had a longtime interest in exploring how artificial light sources manipulate the way we see and understand mediated images whether it’s through streetlights, spotlights or sunlight. Light is apparent not only in how it defines the physical structure of a face but also in how it orients the subject in its surrounding environment. In these paintings, light simultaneously indicates and dissolves the features in Swanson’s face, and the definition of its flicker conveys the fleeting nature of the scene.

Eisler was born in Newark, New Jersey and currently divides her time between Vienna, Austria and New York City. She has been Professor of Painting at University of Applied Arts, Vienna since 2009, taught at the School of Visual Arts in New York in 2007, and was Visiting Critic at the Yale University School of Art in New Haven in 2006. Eisler’s work has been included in notable solo and group exhibitions.

Art Shows to See in Palm Beach: Gavlak, 249B Worth Ave., Palm Beach.