SunFest 2016 Battle of the Bands, a Parade of Talent

Intense beauty often comes from dark places, as many artists know. Erin Fromkes has taken an explosive, color fueled road out of her illness, a mysterious, undiagnosed ailment she has had since she was a teenager that has left her ill and sometimes bedridden. I was so impressed with her work I saw at Art Palm Beach and at the pop up Continuum space on Clematis Street that I needed to see her home studio.

“I need to get my emotions out on a grand scale,” Erin Fromkes said when I got to her unmistakable Mediterranean house in Lake Worth and I could see what she meant right away. Decorated lamp-posts and a painted pair of overalls hung on her front door, just a taste of what was inside.

Birdlike with big spiky lashed eyes, Erin Fromkes is covered in paint seemingly all the time, with spattered pants, painted t-shirt, handmade chunky necklace and kerchief wrapped around her head. Her bright, warm house is a total self-expression, with painted dresses, hand painted furniture, cabinets filled with personal little fetish objects, self portraits all over the walls and a beautiful fireplace mantle with lights and flowers.

“I am here so much I had to make this my total world, “she says, showing me the huge painting used a bedspread while stepping over a carpet of paper bag paintings she has been working on. Images of faces and pill bottles and collages and buildings cover the bags.

Erin Fromkes in her yard with chair and artwork 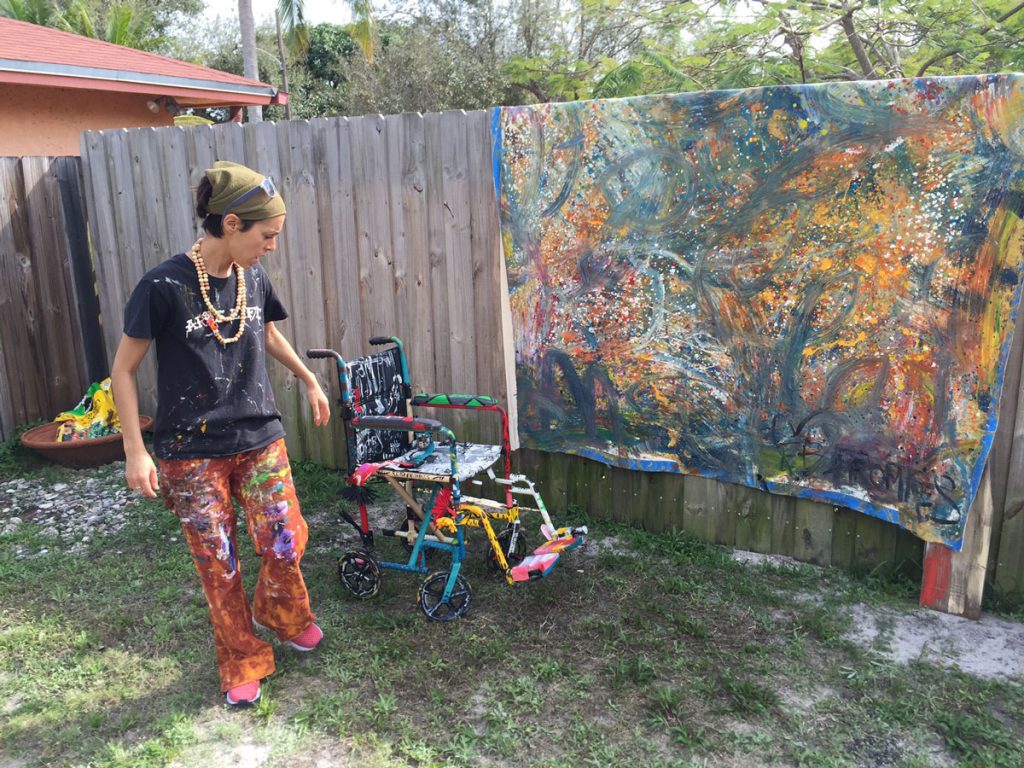 “I like these because they are not as precious as a blank canvas, I can just start to splatter paint on it and get started,” Erin Fromkes says holding one up by the flattened handle. “They are also from Whole Foods which I love. My painted bags are metaphorical. These very bags carried my family’s food home-that which keeps us nourished & alive-much like the art making that keeps my spirit alive & growing.  I love them as a material. As far back as I can remember, they have been in my life. This familiarity doesn’t pose an intimidation factor the way a blank white canvas sometimes can. I also enjoy giving them new purpose. I paint and collage moments from my life on them and when displayed together they tell my story. When I really connect with one, I re-use the imagery and vibe as inspiration to splatter my next big canvas. Using bags as substrates on which to create paintings, selling pieces and using monies earned to again purchase foods to sustain, is a cycle and flow that I find quirky and clever.”

She seems to be feeling good today, as we sit and talk with hot tea and a platter of fresh fruit, her eyes darting around and laughing easily as she fidgets with her necklace.

Erin Fromkes has been living in South Florida for 15 years after moving here from Long Island. She made commissioned murals and did faux finishes for a long time while building skills and contacts and a remarkable body of work behind closed doors. She finally decided to show some work just two years ago, which caught the eye of Roland Chang Barrero, who runs several art organizations including ArtSynergy. He came to see her work and was impressed.

He showed her work and that led to her working with designers painting on clothing and making beautiful, imaginative headdresses out of paintbrushes used as mohawks and faux flowers and ribbons and even syringes. She has shown these pieces in art fashion shows. “Chavella Redd Grayson of Bella Redd Collection is the name of the designer I was paired with for the Continuum Fashion show,” Erin Fromkes says. “She’s sweet, she designs clothing for the tall woman 5”8 and above.

I take my illness and use it as material,” she says mater of factly, pointing out the pill bottles and tubing and labels that come with all her medications.

She shows me the backyard, where more wondrous items await. She has painted an entire car – from hubcaps to seats to steering wheel – in  a hippie like collage of flying doves and Beatles portraits.

“It still runs!” she says cheerfully. 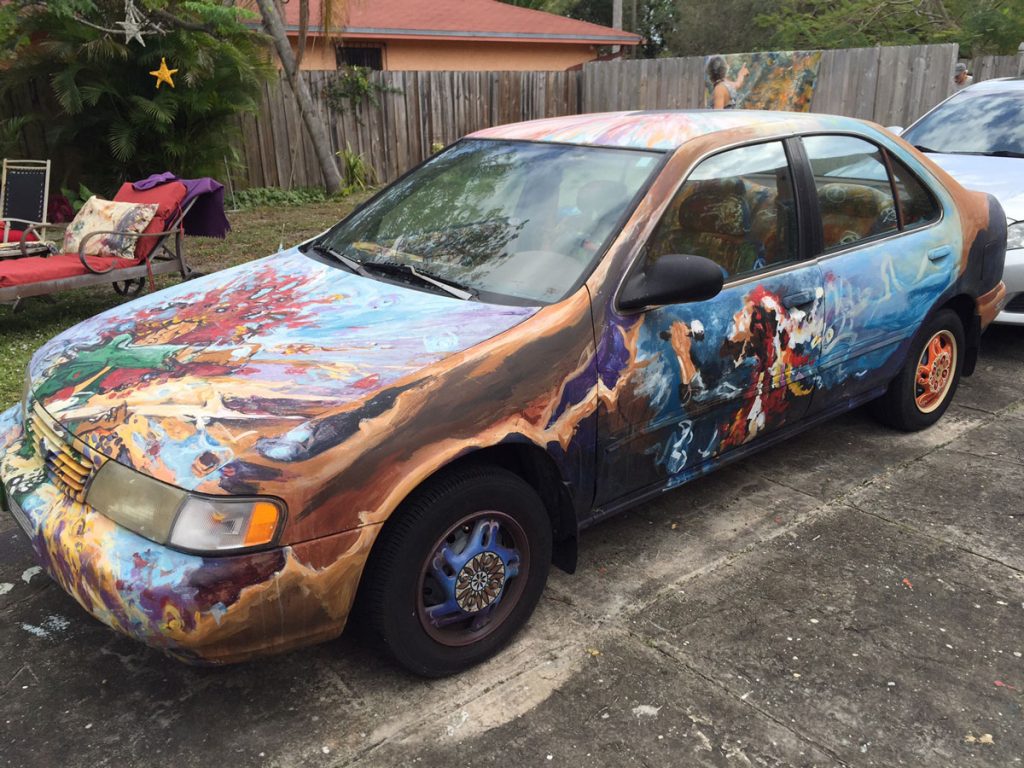 There are painted shade umbrellas and painted rocks and even the trees get adorned. The free standing garage has been turned into her studio, another explosive place filled with works in progress, painted skirts and supplies everywhere. Erin Fromkes uses certain icons frequently like spoons. That comes from a story called The Spoon Theory by Christine Miserandino she has taken to heart. It speaks about how to use spoons as measure of how to use ones time and energy when dealing with chronic illness. She also depicts the Epstein Barr virus that looks like a colorful squashed spider. She listens to music when she paints – David Bowies’s Blackstar is on repeat.

She shows me a painted wheelchair she sometimes uses when she gets tired.

“I’m grateful to have and use my chair when I need it and I love that it is a rolling art piece! But people can sometimes perceive it as weird because they might see me walking and then other times see me rolling, which is just the nature of the game when dealing with chronic illness.”

In a more formal statement Erin Fromkes says “I use my artistic voice to tell the tale of the unseen by showcasing the ability that can be found in disability. Many works that transpire relate to my life with MSIDS, Lyme & co-infections. Using a contemporary style of art, I document life through art making, as moments that fill my world become subject matter. When viewed separately each work stands on its own, a captured moment. Together, pieces form a dialect. The body of art work as a whole mimics time. Painted imagery, symbols and fragments will become a culmination of moments that will serve to depict my life. Mixed fragments aid in story telling and give a visual history. In a style that blends painting and collage, glued papers and daily scraps fill backgrounds to create movement and flow. By adding paint, I create my vision. I love the time capsule quality. Cardboards and brown paper grocery bags are preferred substrates that I use in addition to traditional canvas painting.

Other artworks by Erin Fromkes

To raise her vibrational frequency of energy that is depleted by illness, Erin Fromkes injects personal belongings and amps up environments with pigment to aid with healing. Supercharging her world with color, paired with daily art making, are ways to paint herself out of the darkness. Up-cycled paint clothing & whimsical head piece creations express presence of spirit, strength and perseverance. She can be spotted in these looks on rare occasions, when she leaves the house. “They are celebrations of the voyage out.” she says. “When I’m unable to lift a paintbrush, glue or craft, I switch mediums to accommodate. Digital art making beneath the covers “bedits” and bed sketching keep my spirit alive.”

What ails her is not totally clear though she explains it by saying:

“After being chronically ill for the past two decades, I have been diagnosed with MSIDS, (multi-systemic infectious disease syndrome) a symptom complex of Lyme Disease and multiple associated tick born co-infections and SEID (systemic exertion intolerance disease). “

But the art wins out. Erin Fromkes won Juried Artist Awards at Art Palm Beach 2015 & 2016, a RARE artist award, was nominated for a WEGO Health Activist Award and most recently was nominated and won The Hector Ubertali Visual Artist / MUSE Award, which recognizes a visual Artist whose life and work emulates excellence and contributes to the advancement of quality of life in Palm Beach County. Though too ill to attend, she was chosen to be the Artist in Residence at Stanford University / Medicine-X Conference 2015.

Fromkes has been featured in several magazines including Art Hive, and Ability. The artist is currently represented at RCB Fine Art Gallery in Lake Worth. She has showcased in multiple group shows, including: The Armory Art Center “Take Home A Nude Auction Charity Event”, The Cultural Council Biennial of Lake Worth, Ink and Pistons, 9TOPICS/Girls Club Ft. Lauderdale, Boynton Beach Arts District, and MeAgain.orgs online Juried Art Show for artists with CFS/ME. She has shown at The Mayday Project where her donated Lyme Awareness banner marched through the streets of Arlington VA. Most recently, Fromkes advocated for invisible illness through Art & Fashion at Continuum WPB 2016 and is showing at the 5th Annual 2016 Juried Exhibit at JF Gallery.

Erin Fromkes’ work is timeless and sophisticated and a very personal journey. A virtual, visual, saving grace. You can find her art here: www.slate.adobe.com/a/dLKom