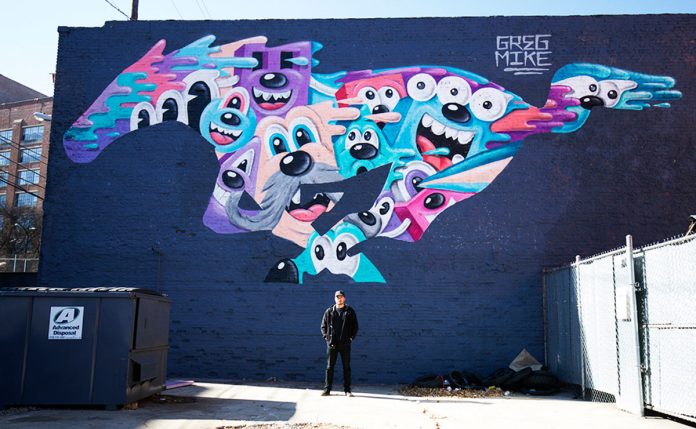 CANVAS is going big now in West Palm Beach. One of the participating artists, Greg Mike, graduated from Cardinal Newman in West Palm Beach in 2000. He has come back to his hometown to participate and give back to the community during CANVAS.  Mike is painting his mural at 501 Fern Street, adjacent to Nicole Henry’s Fine Art gallery.

Mike spent his childhood in West Palm / Jupiter surfing, skateboarding, and  painting the streets, inspired by the colors and cultures of the south growing up here. After attending Florida State University for art and design, he traveled the world painting murals for festivals like the Swiss Alps Vision Arts Festival.

He is the Founder and Creative Director of ABV Agency + Art Gallery where he works with brands such as Nike, Red Bull, Heineken and more.

He currently lives in Atlanta where he runs his own design agency, art gallery and mural festival called OUTERSPACE project. He journeys to Art Basel each year and works on various installations. His artwork is in permanent collection at High Museum of Art (Atlanta) and collected by celebrity clients globally.

Mike says it “Feels great to be welcomed back to my home town to be commissioned to paint something on the streets by the city. I?came a long way from the old days of trying to find spots to paint. ?;)”

If you’ve seen the knockout new James Bond flick Spectre, you know the Bond lifestyle is high class and high tech with nods to old school charm. For a taste of this high life The Brazilian Court Hotel in Palm Beach serves fans the ultimate 007 package with “Brazilian Bond” available through the end of the year, starting at $23,300 for two nights.

When guests arrive, welcome bottles of Macallan Whiskey and Bollinger Champagne will be waiting – both favored brands of 007 – as well as Tom Ford cufflinks for men and Louboutin ‘Pigalle’ heels for Bond girls.

The Brazilian Court Hotel offers an Aston Martin DB9 rental for the weekend and private helicopter and yacht tours, also included is a seven-course Chef’s Table dining experience with a whiskey tasting at Cafe Boulud. To get your spy game looking its best included is a sexy sleek styling session at Frederic Fekkai Salon.

FAU has some theater heaven programs happening with “The Playwrights Forum”, a lecture/workshop/master-class program with some of America’s most celebrated playwrights, including Marsha Norman, Steven Dietz, John Guare, Deborah Zoe Laufer, Lauren Gunderson and Israel Horovitz.

A special night happens Wednesday, Nov. 18 at 7:30pm with An Evening of Political Theatre with Israel Horovitz . Three short plays will be followed by an eye-opening post-show discussion with the playwright.?The plays are:

Beirut Rocks
A group of four American college students studying abroad are caught in the middle of the 2006 Hezbollah-Israeli war. As they wait to be evacuated from the hotel where they have taken refuge, these liberal arts students, all friendly smiles and earnest listening as they discuss their views, begin to reflect the tension of the outside conflict, and relatable youngsters suddenly become militants and banter becomes a series of furious accusations that threaten to spill over into violence.

What Strong Fences Make
Set at an IDF checkpoint just outside Ramallah, Horovitz calls this play “a simple and clear stage-play that attempts to make a statement about a real-life situation that is anything but simple and clear.”

What’s New in the Arts in West Palm Beach? Catch the latest news about CANVAS, museums & other art institutions around West Palm Beach with Sandra Schulman