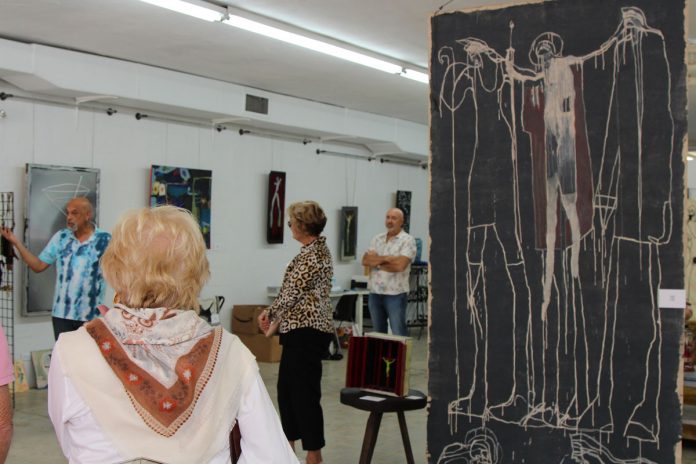 The Cultural Corridor just off Dixie on Belvedere Road is about to get a large infusion of multi-media art when Rolando Chang Barrero, who has a gallery in Lake Worth – Rolando Chang Barerro Fine Arts – and runs a gallery/studio at the Boynton Beach Arts District, opened his third space called The Box Gallery on June 3rd, 2016. The opening was a three day weekend curated to show off what The Box is all about.

Barrero, who recently produced the KeroWacked Festival in Boynton Beach’s Art District, is a longtime South Florida figure in the arts and is constantly reaching out and bringing in new artists of all types – speakers, curators, visual, filmmakers, writers, poets – to join in on the fun.

The Box Gallery is a big canvas to paint – a 4,000 square foot multi-media exhibition space that will serve the art community and art patrons with world class exhibitions, projections, performance art, and installation art. The 3-day grand opening of the Box Gallery will showcase the potential and the possibilities of the space.

“The Box Gallery is created to enhance the burgeoning art scene of Palm Beach County. The 4000 square feet space is designed to be flexible to allow, 2D, 3D, performance art, installation art, and time-based arts. With the exception of a photography cove on wheels, which also serves as a projection screen, and 20 chairs, the space is to basically remain as a blank canvas. The Grand Opening of The Box Gallery was carefully organized to show the potential of space. The Box Gallery will serve as the home for two non-profit organizations; Art Synergy, and The Florida Arts Association.”