City Pizza in CityPlace: The Dolce Vita on a Plate

City Pizza isn’t just defined by its food, although of course that’s the main attraction, for good reason. It’s good food! The restaurant brings you a step closer to the rustic beauty of Italy—right here in our own CityPlace.

Finding the best Italian food in a town with such fabulous gastronomies, the best advice would be to skip restaurants that serve “creative” renditions of the real thing and stick to those that offer the time-honored classics without the extra fun fare.

For instance, take City Pizza on 632 Hibiscus Street located in the heart of CityPlace. Their dishes are made with fresh, unpretentious ingredients, yet they taste like something you’d get in an upscale restaurant. To try to determine which of City Pizza foods are the “best” is like trying to prove which of the two islands of Sicily and Sardinia, which lie off the Western Coast of the mainland, serve better pizza and pasta—it’s strictly a matter of tastes as everyone has their own opinion.

Just before Hurricane Irma hit our Florida shores, I took a walk around CityPlace and found myself on the front steps of City Pizza, a picturesque hot spot that accommodates about 300 people. The staff was friendly and so were some of their frequent locals, who didn’t hold back expressing themselves as soon it became apparent that I was there to review the restaurant. An elegant, middle-aged woman who was dressed in her best Friday night attire with a noticeable European flair, came over to my table and quickly struck up a conversation.

“I come here three, sometimes four times a week,” said the woman named Anna. She pulled a chair and sat next to me unannounced, like an old friend who doesn’t need the formality of an invitation of sorts. “This place is fabulous,” she declared as she tapped her red polished fingernails on my table as a way to proclaim the establishment as her second home.

“The food is excellent, the management is excellent, and it just reminds me so much of Europe,” Anna said as she revealed that she was from Sweeden. When asked what her favorite food here was, she extended her arms as if to say, “I love it all!” But then expressed her love for pizza and spaghetti with meatballs as her favorite dishes.

As I listened to her, I took quick glances at the menu and spotted the page with the three columns: Create Your Own Pizza, City Pizza’s Famous Gourmet Pizza, and City Pizza Creations. But tonight, I was in the mood for pasta. I found there were many fantastic Italian traditional dishes on the menu, but perhaps no other summed up the very essence of Italian cooking better than Homemade Lasagna [or Lasagne in Italian], one of the most delicious baked dishes Italy has to offer, and one of the world’s oldest pasta recipes, and most common comfort food made by alternating layers of pasta sheets, meat, sauce, and cheese. City Pizza’s lasagna consists of three layers of tender pasta with creamy Ricotta Cheese, ground beef, Romano Cheese, zesty tomato sauce, and topped off with melted Mozzarella Cheese. 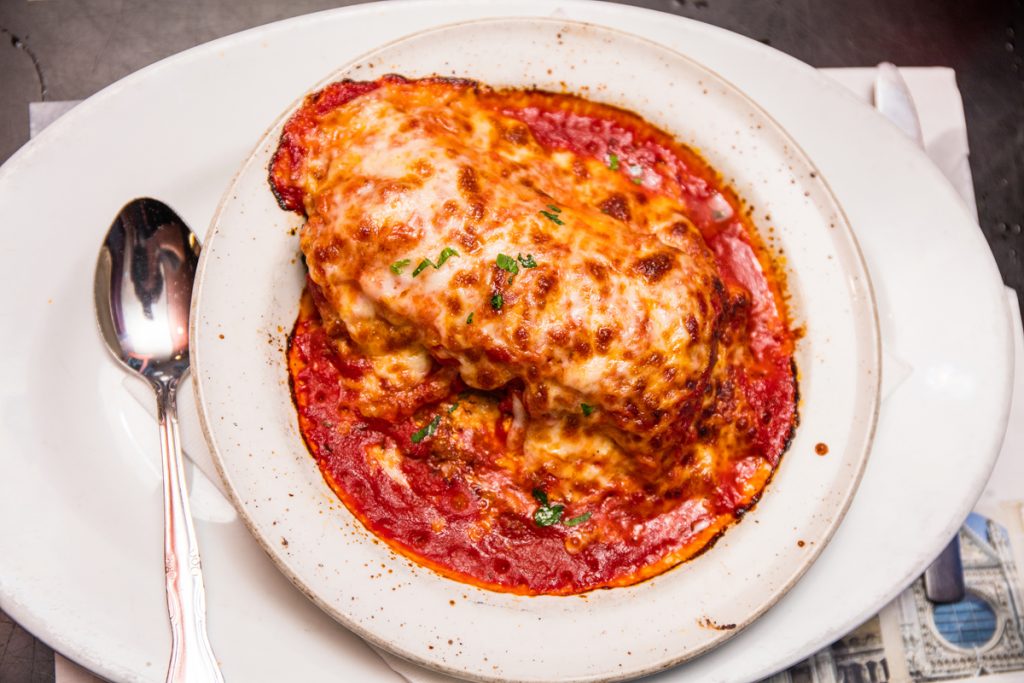 As an avid Italian foodie, I couldn’t resist the temptation of ordering Fried Calamari, one of the restaurant’s many favored appetizers. As I waited for my before dinner salad to arrive, I looked around. Everything about this place reminded me of Italy. The bistro style wooden tables and chairs arranged in groups of four or more. The amber lights, the red and green that was accentuated in the decor, and even the table placemats—a paper map of Italy with brief descriptions of the country, which is found in Southern Europe well into the Mediterranean Sea.

The garlic and oregano smells coming from the kitchen enhanced my appetite and love for Italian food. I’ve never visited the country that’s shaped like a boot. But I’ve read that visitors from all over the world enjoy visiting Italy for its blend of the past and present. And perhaps that’s also the attraction of City Pizza. The smells, the sounds, the rich food, the  CityPlace vicinity, not to mention the warm and friendly company.

My house salad arrived and Anna gently excused herself, going back to her table and her date, a fine looking older gentleman also appropriately and stylishly dressed for the occasion.

Both the salad and the fried calamari were delicious, but I left plenty of room for the best course. A bit later, my lasagna was served and immediately I asked for the last ingredient. It’s no secret that Italy is known as the worldwide capital of cheese—most especially Parmesan cheese, the quintessential pasta topper. As a cheese lover, I made sure my server sprinkled a good amount over my hot dish. And because nothing else goes better with cheese than wine, I opted for the house brand, a mild red wine that tasted like the grapes had been grown on the “land of wine,” that sun-soaked peninsula called Italy. 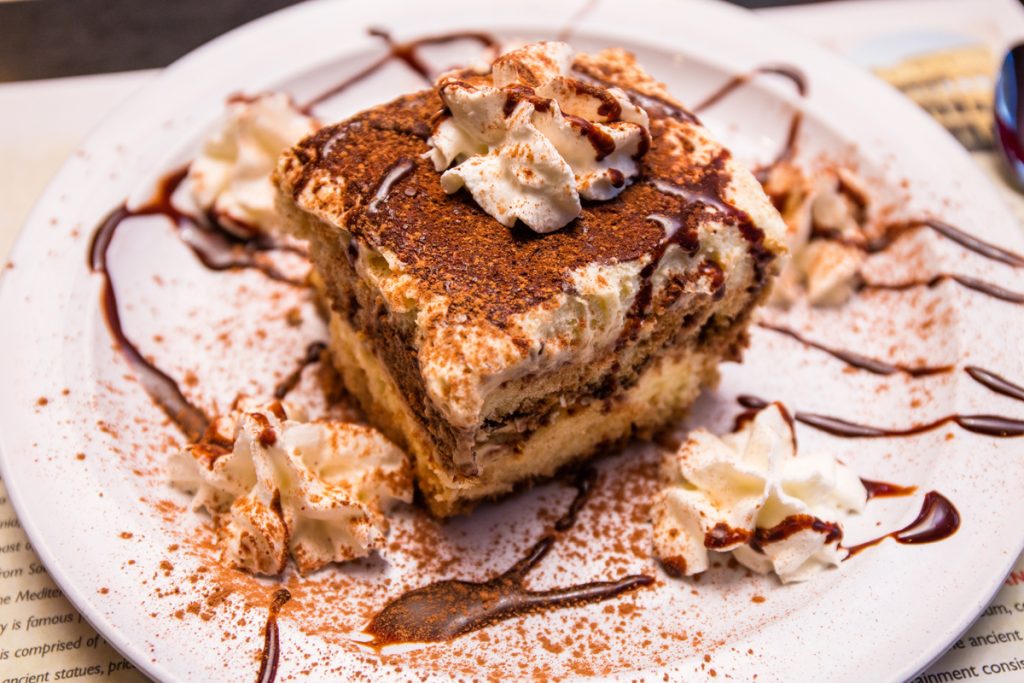 Everything good comes to an end, no doubt, but not without dessert. I ordered the White Russian cake that tasted like a huge burst of liquor had been added to this incredibly soft indulgence. Delizioso!

City Pizza isn’t just defined by its food, although of course that’s the main attraction, for good reason. It’s good food! Whether you order the bruschetta, baked ziti, side of meatballs or Tiramisu, it’s really the people and that cool European ambience that add the dolce vita on the plate, allowing you to step closer to the rustic beauty of Italy—right here in our own CityPlace.

It’s good food time! City Pizza in CityPlace: The Dolce Vita on a Plate. Food at City Pizza Italian Cuisine are made with fresh, unpretentious ingredients.