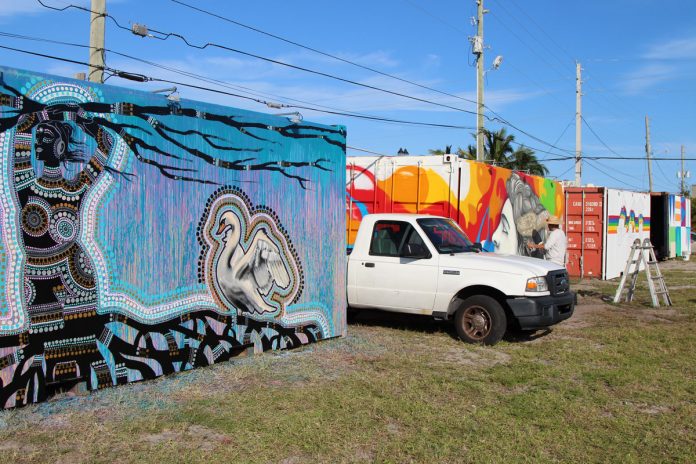 WPB Magazine’s Arts & Entertainment Writer Sandra Schulman and I walked around the area where seven local artists are competing at CANVAS Local Showdown for an artist lineup position for CANVAS 2017. These seven artists reside in Palm Beach, Martin, Broward, and Miami-Dade County. They have been executing their designs on 20 foot long shipping containers located on 25th Street since November 4.

Now the public has the chance to vote for their favorite CANVAS Local Showdown mural using the official CANVAS Art app. The winner will be announced at the closing of CANVAS on November 20.

Since the inaugural edition of CANVAS in November 2015, the Local Showdown has been an excellent idea, specially because it happens in one of our most beloved districts, The historic Northwood Village, home to many artistic and cultural venues.

Some of the artists are also well known to locals as their work can be seen in various restaurants, on the sides of buildings and empty lots in Downtown West Palm Beach. These are the artists and what we know about them.

Jhonattan Arango is a Cuban artist who goes by the name of Anon. He says his work is an ode to order, to coming together. In this year’s CANVAS Local Showdown he offers his latest version of his greatest intention.

Ron Burkhardt is a senior class artist who has been exhibiting for many years both in Palm Beach and in the Hamptons, Long Island, NY. He graduated from Western Michigan University/Kalamazoo, and later studied at the Art Students League of New York. He has received over 200 awards for creative excellence and his work has been recognized and honored by The United Nations, The Art Directors Club of New York, Creativity, CLIOS, and the Palm Springs International Film Festival among others.

Bruce Helander, artist and critic, writes: “Ron Burkhardt is a consummate bi-coastal artist, who has a literal great gift for calligraphic gab, expressed in symbols and marks on canvas with an assemblage style that’s truly unique. As a man who has outworn and outpaced many creative hats, most notably as an inventive advertising executive and later as a painter of subliminal communicative works, which he invented over time and labels “Notism,” Ron takes the best of his creative experiences and throws out a curve ball at the viewer that spins a curious personal tale with cryptic messages incorporating his own daily schedule wrapped into one.”

Jennifer Chaparro is a painter and muralist who often participates in street chalk art events and also has a company, Amazing Street Painting, that produces street art events for towns and organizations to paint large murals with chalk. She lives in Hobe Sound and recently completed a work in honor of her grandfather’s art. The project was to create a mural incorporating WAP projects in the style of posters of that era.

Other artists at CANVAS Local Showdown include the dynamic duo Cheryl Maeder and Marilyn Walter.

Maeder, Visual Artist and Filmmaker, transitioned from photographing fashion models to photographing real women which became the inspiration for the Dove Campaign on Real Women Real Beauty. In 2005, she relocated her studio to the Miami area and deeply immersed herself into fine art photography and filmmaking.

Marilyn Walter is a conceptual artist.  Walter’s studio is located  at the Hacklab, Boynton Beach, where she is the Artist in Residence. The Hacklab is a community maker space where Art, Technology and Science collaborate. As an American, Walter grew up in Kuwait and Iran, traveling with her family throughout the globe. Her experiences and observations of both Eastern and Western cultures are thoroughly integrated into her work in art, film and technology. 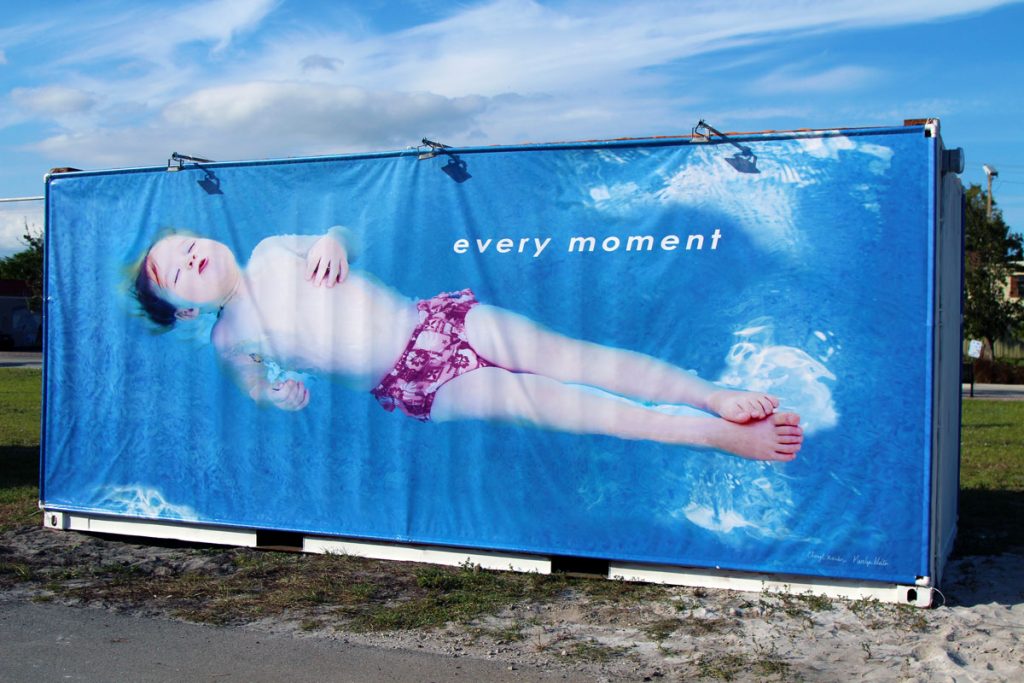 Luis Valle, from Miami, is also participating. Luis, aka El Chan Guri, is a Nicaraguan artist who at an early age came to the United States with his family due to war and political instability in his homeland.  Valle also lived in New York which he considers a big influence on his work.

Luis moved back to Miami and is part of the artistic movement occurring down there. Inspired by the city’s vibrant nature and sensuality, Luis has immersed himself in the local scene working closely with the community and local organizations such as Arts For Learning Miami, the Miami Children’s Museum, and The Miami Dade Library Systems. He is active in the Miami art scene creating commissioned murals, as well street art pieces on businesses and neighborhoods throughout South Florida. His style is a blend of influences from indigenous cultures, psychology, shamanism, religion, spirituality,
frequency, vibration and energy.

Eduardo Mendieta is a local who has repeatedly said “I make art for the people”. Mendieta is originally from Union City, New Jersey, and goes by the moniker Emo. He has been living in West Palm Beach for the last 20 years.

Starting at a young age he was interested in graffiti and the fine arts. Now he is showing in various locations throughout South Florida. His large colorful designs can be seen at Cabo Flats restaurants and in a prominent art lot on the west end of Clematis Street.

Ruben Ubiera, who lives in Miami, is also participating in CANVAS Local Showdown 2017. Ruben comes from Dominican Republic and he is a neo-figurative artist, known for his strong use of the line, graffiti inspired technique/esthetic, urban murals, mixed-media pieces and installations, all created with reclaimed-objects and found artifacts.

He paints and draws in a style considered as Postgraffism, but he prefers to call it urban-pop, since he has lived most of his life in urban, populated areas and most of his inspiration is derived from the inter activity between man and his urban environment.

Ubiera strives in all his work to capture an essential part of his past, his present and his subjects through the use of the line and form. His work includes still-life and situational portraiture but he tends to primarily focus on depicting his immediate urban surroundings and everyday complex human emotions using a strong and expressive line, a vivid graphic color contrast all while adding a mix of youth-angst and detailed complexity. All this is executed on found objects, he seldom paints on canvas. Ubiera believes that his work has no frames, much like the everyday art that is developed on the streets.

CANVAS continues to be a bold vision transforming West Palm Beach into an art hub for the public, ensuring us that art is an essential component of creating communities. Visit canvaswpb.org and keep up to date with all events and artists.