Clematis by Night Is The City’s Party!

When I first moved to West Palm Beach, driving along the streets of the city by its downtown area, there was a flag on one of the corners that read: “The City’s Public Party: Clematis by Night”.  Coming from a Latin culture state of mind where public parties are large social gathering with lots of drinks and food, I thought I was starting to entertain the idea of a huge celebration coming soon.

Right at the end of famous Clematis St there is a small park called Centennial Square which makes this part of the city famous and popular because of basically two things: its interactive fountain and Public party each Thursday night known as Clematis by Night. This is a series of public concerts happening every Thursday night for the better of three hours. The event organizers (The City of West Palm Beach Community Event Department) makes sure to provide a variety of different music performances that include local bands from all over Florida and sometimes way beyond. And also each night tries to fashion a different theme to go along with the mood of the weekend, even matching the thrill of some national festivities like: Halloween, for instance where attendees come in showcasing a myriad of disguises to impress.

Taking place at the historic Centennial Fountain every Thursday night.

Clematis by Night events has been around in West Palm Beach for over 25 years and it is a familiar site int he city to chill out, grab a nice street meal right after work, share a few drinks with folks, chat, dance, meet new people, enjoy children playing.  If you become a regular at Clematis by Night you will get to know there’s quite a few ones coming every Thursday. If it gets a bit too hot as Florida sometimes seems to go all along, try some smoothies which are sold in site and made out of fresh fruits. Or for those who want to try some grilled meats, usually there is a stand cooking delicious ribs that are a must-do. 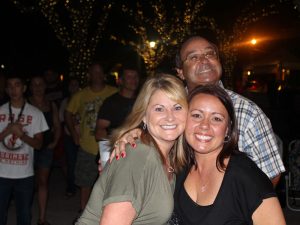 From rock & roll, reggae, salsa, oldie music to today’s greatest hits, there’s always a music performance that will get a grip on you as never before. Check here who will be performing next time and join thousands of folks from all walks of life coming to enjoy the area’s best rock, r&b, reggae, blues, soul, swing and Latin music.

Clematis by Night Is The City’s Party! Learn More About The Pubic Party That Takes Place Every Thursday Night On Clematis St. See What Happens At Each Event