American Flags as art have been a popular motif since colonial times, stars, stripes, and bright colors lend themselves to a spectrum of interpretation. A newcomer to the South Florida art scene is Dan O’Keefe, who recently moved from Bellport, Long Island where he was an artist at a gallery I briefly worked with. What I love about Dan’s work is how he gets his material inspiration from that all American art supply store –  Home Depot.

“I just love walking the aisles and seeing the tools and materials and figuring out what I can do with them,” O’Keefe says sitting in The Box Gallery where he has his first Florida show on December 23rd as part of “The United States Of American Art”, a show of patriotic work to coincide with the upcoming inauguration.

In addition to O’Keefe there will be work by artists Erin B. Fromkes, Gary Kroman, Patricio Rodriguez, Nelson Babilonia, and Rolando Chang Barrero.

Dan O’Keefe works as a Horizontalist, which means he does the actual artwork on a flat, horizontal surface. Horizontalism has a rich, long history going all the way back to Native American sand painting and includes the work of such pioneers as Jackson Pollock and his drip paintings, but it is more presently done due to using materials that tend to drip in the painting process or need some kind of pressure applied. It’s also a rebellion against the easel.

O’Keefe “paints” on aluminum coated insulation board, a lightweight material that comes in big sheets he cuts into the desired shape. The main benefit is the ready made shiny silver background. He initially glued actual thin sheets of aluminum onto wood boards but they became increasingly heavy to move around and deal with. They are also sturdy and durable as they are normally used in walls. Then he uses Venetian plaster – which is essentially ground marble powder – mixed with colors. He then spreads the colored plaster mix onto the aluminum using palette knives to produce a thin scraped effect that uncovers some of the aluminum to shine through.

“Creating art horizontally from a self-reflexive process-based technique is the driving force behind my exploration of abstraction,” O’Keefe says. “My process begins with applying layer after layer of Venetian plaster (mixed media) mixed with color paste, using knives and a hawk as my pallet, to the surface of the picture plane. While applying and dragging the pigments, I embark on an additive/subtractive process, scraping through the layers while leaving some exposed aluminum base. This exposure is an integral element of the composition. The juxtaposition between color and form, viewed from both visual dimensions, create an optical experience. There appears to exist a surreal calmness, an almost serene selective re-creation of reality in a metaphysical sense.”

Dan O’Keefe worked in construction for many years and became fascinated by the layers of paint and varnish he uncovered when stripping woodwork.

“I liked seeing the different colors and textures that were revealed,” he says. “I began to think about how I could recreate that in my art, how the process could create itself.” Other artists who have become extremely successful in this technique include Gerard Richter, who was exploring the scrape and drag of paint using giant squeegees around the same time as O’Keefe though the two artists were unaware of each other. O’Keefe explored the painting using a variety of colors, always letting the gleam of the aluminum shine through.

About 5 years ago Dan O’Keefe was commissioned to paint an American flag using his new found technique. It immediately clicked, and he was encouraged to start painting flags in all sizes and using different techniques to create the section with the stars. 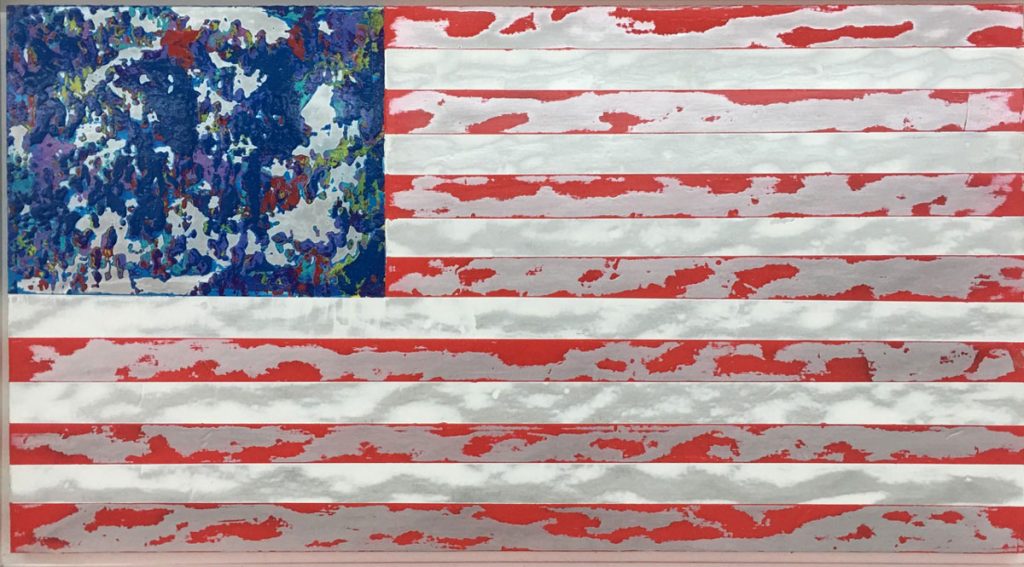 “Somewhere between the insouciant paint application of Jasper Johns and the passion of Cozen, the upfront tactility of his art is fresh,” says painter and art critic John Perreault. “O’Keefe’s use of pigmented Venetian plaster and his denial of both the easel and the paintbrush proves you can make serious art outside the hegemony of the art-supplies industry.”

“I sometimes use the head of a screwdriver or other cross shaped tools to dapple the paint on to make a star,” he adds. “Then I thought I could make them into a wearable art, so I had them printed onto denim jackets.”

Dan O’Keefe showed in some Long Island galleries but had more success selling work directly from his open to the public studio called Studio 120, situated on the quaint downtown street of colonial Bellport.

“I had never seen a local studio where the artist was creating right in the front of the space as well as displaying the work all around them so that’s what I did. It worked really well and I had a lot of people stroll in, watch my process and then buy a painting.” One of his flag painting sold for $28,000 at an auction, and others have sold for 5 figures at art fairs.

Changes in his living situation brought him and his wife and 2 dogs to South Florida this season. Now he’s excited about his first exhibit and also expanding the flag paintings into making ones from different nations  – Irish, Italian, Hong Kong – and exhibiting them in series. He painted a gorgeous Rainbow Flag that will be on display at The Box show. Other artists in the show have their own takes on flags. Barerro uses his iconic little birds as stars, flocking and chirping and tumbling out of their “star box” onto the stripes. He collaborated on a gorgeous piece with Gary Kroman, painting the backdrop flag while Kroman overlays a layer printed with Lady Liberty, a flapping Bald Eagle, symbols from American money, an Indian head and George Washington.

In this dubious, divided political season, great art is one thing we can all get behind.

Tags
View from the Harvey