“Hear the Dance” by Miami City Ballet at the Kravis

Looking at the nine days of SuperCar Week and their Grand Finale, SuperCar SuperShow Sunday on the new $30 Million Dollar West Palm Beach Flagler Drive Waterfront that drew over 35,000 spectators, over 500 vehicles and a thousand VIPs, no wonder why Palm Beach County and the City of West Palm Beach issued official Proclamations, proclaiming the second week of January as SuperCar Week.

“Our team is community and South Florida minded.” Presenting Sponsors, Palm Beach International Raceway and the City of West Palm Beach support the series of events and although 85% of the vehicles are registered by individual owners, enthusiasts, collectors and car clubs, all the world’s greatest luxury brands, both new and vintage are all there; Lamborghini, Aston Martin, Mercedes Benz, Rolls Royce, Bentley, Porsche, Audi, BMW, Tesla, Jaguar, Land Rover, McLaren and Ferrari. 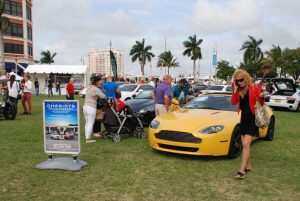 The SuperCar Week series of events includes: Cars & Coffee event at Lamborghini Palm Beach, a VIP Kick Off Party at the EAU Palm Beach Resort & Spa in Lantana, SuperCar HorsePower Show at opening day of the polo season at the International Polo Club in Wellington, boutique events in Mizner Park in Boca Raton, Downtown at the Gardens in Palm Beach Gardens, Old School Square in Delray Beach, where this year SuperCar Week and it’s newest charity beneficiary “Wheels from the Heart”, gave away a car to a deserving single mom. SuperCar Week team VP Gina Palmer produced this year’s track event at Palm Beach International Raceway in Jupiter and brought in driving professionals hpde and Hooked on Driving to give ride and drive thrill rides to spectators between the Palm Beach Driving Club’s road course sessions. Street Car Drags and BIZSPEED pumped up the drag strip till almost midnight while in the VIP Pavilion, which was turned into a dining/entertainment “Carbaret”, the EAU Palm Beach poured champagne, while entertainment from the talented Ethan Parker, powerhouse Michelle Lynn, sultry Lauren Echo, the inimitable David K, soulful Vanessa Diaz and Gyorgy provided an intimate escape from the roar of the tracks. The outside stage featured DJ’s Supreme 1, Adam Lipson, Cody, Ilya, the full Ethan Parker Band, A New Way to Live Forever and video projections by Palm Beach TV.

[quote_right]“It was our most exciting track event ever.” Said Gina Palmer, VP and CFO of SuperCar Week. “We developed this year’s track event with Palm Beach Driving Club’s President, Ken Fengler and Jackie Rae with the help of the track’s management and Jordan Mara Director of Operations and Aidy Alonzo, Marketing Director of PBIR.[/quote_right]

On Saturday Night, before the West Palm Beach Waterfront Grand Finale, a special VIP and Sponsors Cocktail party was held at Worth Avenue’s, Via Amore, previously known as the Gucci Courtyard and then dinner followed at Bice Palm Beach. 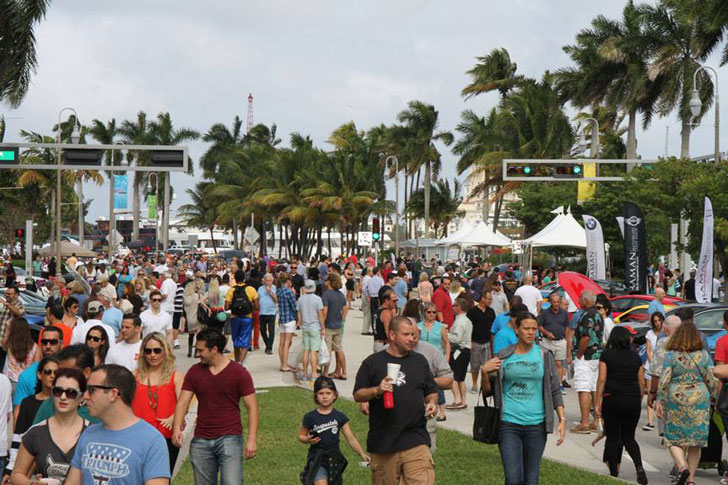 Sunday’s SuperCar SuperShow was built-out as a cityscape of vehicles; SuperCar Street Muscle Beach, Memory Lane, Corvette Court, Viper Blvd, Porsche Place, ArtCar Avenue, Green Street for electric vehicles, BIZSPEED Blvd (who this year pulled in 150 individually owned vehicles from Miami/Dade and Ft Lauderdale/Broward regions), a Marine Village of Off Shore Powerboats (with matching supercars), courtesy of Larry Goldman of Extreme Powerboats and Bill Mazzoni of BTM Marine. “it’s a terrific show’ said Thomas Clarke, Executive Vice President of SuperCar Week, in charge of getting all the vehicles into place. “it’s an incredible challenge to position more than 500 vehicles in less than 3 hours, but from sunrise till 10 am we get it done. Powerboats included.”

McLarens and Lamborghinis and all the world’s luxury brands showcased their latest and greatest, but supercar means more to the folks at SuperCar Week than just those great cars from Italy. “For us, it’s about significance” said London, “known as the rarest car in the world, Caroll Shelby’s personal 1967 GT500 Convertible, one of one, was on display courtesy of it’s caretaker Brian Styles. The Black Pearl, noted as the fastest 0-60mph car on the planet at 1.2 seconds highlighted the Green Street area along with the latest from Tesla. The RENNtech Mercedes SL 65 V12 Laurence Gartel ArtCar that was unveiled during Art Basel in December at a private Fisher Island VIP event was also featured.

Celebrating it’s 5th Anniversary, Supercar Week continues to produce fun filled family events that are free to the public. “We’ve grown 400% over the five years” says London. “each year, more industry and individual auto enthusiasts join us. We look at ourselves as curators, facilitators and collaborators, where the individuals and companies involved help us make each of the nine days bigger and better each year.

Vehicles and featured sponsors come from all over the state of Florida. Dimmitt Auto Group from Tampa Bay brings in the McLarens, Sebring Raceway brings it’s official pace car and stimulates individuals from Central Florida to register, BMX Tricksters and Fireball Run come in from Orlando to entertain the crowd. A special thank you to Dupont Registry, who joined us this year as an official sponsor. It looks like SuperCar Week might just start to catch on as a state wide event.

“It’s all so spectacular for 7 hours. Tens of thousands walk up and down the West Palm Beach, Flagler Drive Waterfront. Ladies and Gentlemen and children of all ages. Even the toughest of gearheads soften when they see the faces of the children taking in all the color, art, speed and design in front of them. Success is a double edged sword, says London. With Supercar Week’s growth each year, our costs increase. We’re still looking for that title sponsor to help us handle the growth, increase our media distribution and to allow us to take SuperCar Week to the next level.” Tim Byrd “The Byrdman” celebrity broadcaster, Master of Ceremonies, voice of and Senior Vice President and Co-Founder of SuperCar Week says, “it’s the largest event of it’s kind in South Florida and we all know Palm Beach is the greatest place to live, work and play.”

If you Like Cars, Supercar Week in West Palm Beach Will Be an Event Made for You. Get Ready for Destination SuperCar Week Palm Beach 2016. All Details Here!

Murals, Morsels and More in Lake Worth

5 Things to Do Outdoors in West Palm Beach