From Iguanodon to Tyrannosaurus Rex, dinosaurs that ruled Mesozoic North America are part of the Dinosaurs Around the World exhibit now showing at South Florida Science Center and Aquarium through April 16, 2016. If you have a kid that is going through a “dinosaur phase” in everything he or she does, this is their best opportunity to come to grips with scientific concepts and extrapolate the behavior of dinosaurs as similar to the wildlife they see at the zoo.

Dinosaurs Around the World is a traveling dinosaur exhibition featuring advanced animatronics as well as authentic casts, and real fossils. Life-like replicas will roar, swing their tails and scratch their claws. The huge, dangerous reptiles that went extinct over 65 million years ago are represented in the SFSC and accompanied by cutting-edge research and immersive design elements to explain and move the imagination of visitors to traveling back to an age when dinosaurs ruled the planet. 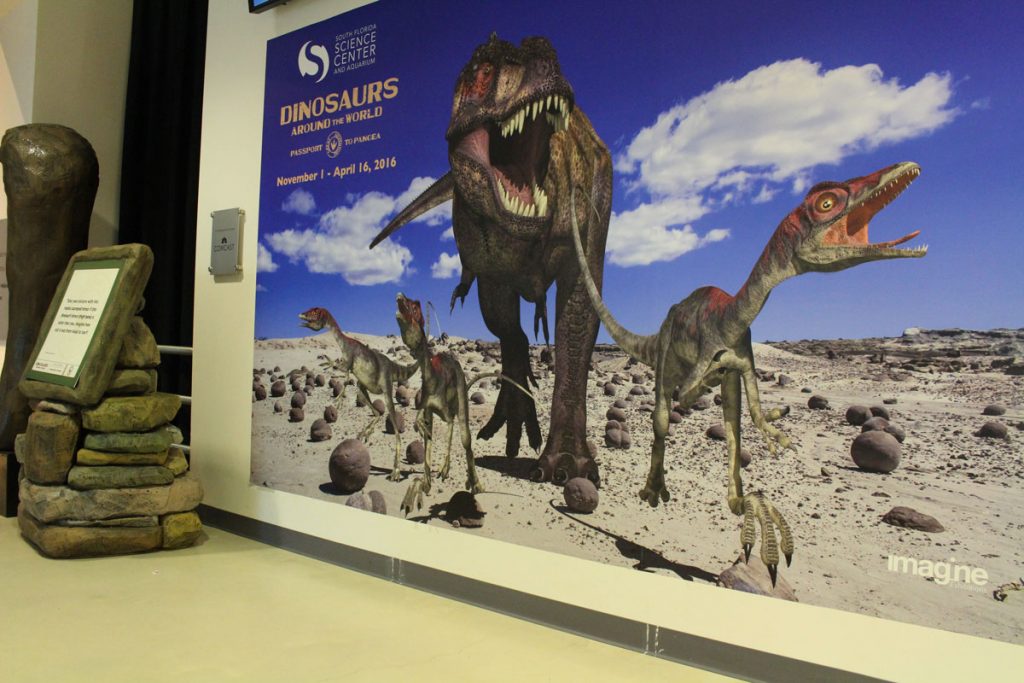 This blockbuster exhibit starts in the Pangaea (Gallery 1) describing the supercontinent that existed during the late Paleozoic and early Mesozoic eras. Here visitors will find depictions that show how different our planet was from what it looks today with seven continents. Then, they will discover how plate tectonics, land bridges and volcanic activity allowed dinosaurs to disperse to all corners of the globe, giving each of the seven continents its own unique selection of these giant reptiles.

The dominant terrestrial vertebrates that reigned the planet for more than 200 million years ago adapted into a variety of forms due to the conditions of the areas in which they lived. The Dinosaurs Around the World exhibit provides an immersive educational experience exploring a broad range of topics throughout 8 other galleries – South America: The Birthplace of the Fearfully-Great Reptiles and Land of the Super-Giants (Gallery 2); European Islands: Home of Laurasia’s Miniature Dinosaurs (Gallery 3); Antartica: a Temperature Dinosaur Vacation Spot (Gallery 4); Australia: Way, Way, Way Down Under; Africa: Home of the World’s Meanest Dinosaurs (Gallery 6); Asia: Home of the First Dinosaur Fashion Show (Gallery 7); North America: Home of the Dinosaur Melting Pot (Gallery 8), and Gallery 9 explaining the end of dinosaurs.

At the Dinosaurs Around the World exhibit, kids will be delighted to learn through this world-class entertainment and experience an Earth very different from today. They will be able to get deep into this adventure, even dressing like dinosaurs, or scouring for bones and skeletons of fossils like real scientists. The exhibit brings more than a dozen life-sized animatronic dinosaurs – including Herrerasaurus, Amargasaurus, Iguanodon, Neovenator, Oviraptor, feathered Velociraptor, Hypacrosaurus, Leallynasaura, Minmi, Juvenille Spinosaurus, T-rex, and Triceartops that are situated to describe different eras in which they lived. Among the fossil casts there’s an Iguanodon thumb spike, a velociraptor foot with claw, and a Velociraptor skull.

Dinosaurs Around the World Photo Gallery…

Scientifically said, the Dinosaurs Around the World roaring in West Palm Beach at the South Florida Science Center and Aquarium is fun of dino proportions. There wouldn’t possibly be a better location in South Florida than our own Science Center and Aquarium. The center also features more than 50 hands-on educational exhibits, an 8,000 gallon fresh and salt water aquarium with both local and exotic marine life, a digital planetarium, conservation research station, Florida exhibit hall, Pre-K focused Discovery Center and an interactive Everglades exhibit.

Planning a visit? – Admission to Dinosaurs Around the World and the Science Centers permanent exhibits is only $16.95 for adults, $12.95 for children aged 3 to 12, $14.95 for seniors aged 60 and older, and children under 3 are free. Additional fees apply for Planetarium shows and the miniature golf. SFS Center and Aquarium is located at 4801 Dreher Trail North, West Palm Beach and is open Monday – Friday from 9am-5pm, and on Saturday and Sunday from 10am-6pm.
For more information, call 561-832-1988 or visit www.sfsciencecenter.org