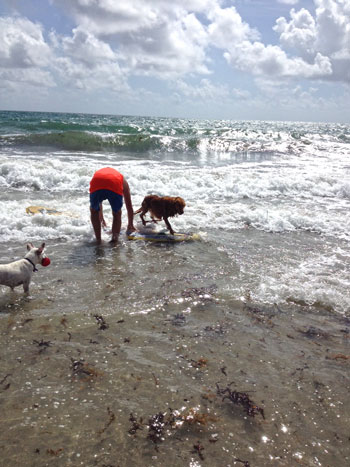 The day before Hurricane Erika pooped out – but did manage to wash away a lot of turtle nests and new sand that had just been placed on the North Palm beaches – there were dozens of panting, wagging, butt sniffing, newbie surfing dogs at Carlin Park on Saturday, August 29th morning attempting to ride the waves at the inaugural Hang 20 Surf Dog Classic. Hosted by Furry Friends Adoption and Clinic, proceeds from the event went to funding Furry Friends, a no-kill shelter that has kept dogs and cats since 1985 in the city and also at a 27-acre ranch in Palm City, said Executive Director Pat Deshong.

For a first time event it was a big sloppy welcome, with vendors and music and food for all the canine happy campers. It was such a dog gone success they are already planning to do it again next year.

Not all dogs are born surfers, so leading up to the competition, Furry Friends hosted several surfing lessons at the beach where owners could bring their dogs out to get them comfortable on the boogie boards and in the water. There were some wading pools on the beach so pooches could escape the hot sand, and more than a few dogs who were way more into chasing Frisbees and balls into the choppy surf than getting on some slippery board and being shoved out into the water.

But then there was Waldo, a 6-year-old Tibetan Terrier, the canine companion of Susan and Mike Leverette of Sebastian, who took home top dog first place in the medium dogs division. He gamely held his little boogie board ground and rode the wave all the way into shore. There were prizes awarded – gift baskets and surf board shaped tags – by a gnarly looking dread locked group of super tan judges. Bow wow!

A vintage Rambler stuffed with a board held court in the parking lot, the pavilion had melting chocolate chip cookies, brownies and lots of cold water for adults. A band played some classic surf rock and there was just general dog mayhem everywhere you looked. Big dawg fun for all, and I sure hope some furry friends found new homes.

I rarely get to bring my whippet anywhere, he’s a bit of an spooker, temperature sensitive and oh yeah, a DOG, so it was really nice when the generous folks, including co-owner Cheryl Averta at Ocean Bleu Grill in Teuqesta actually read my column all the way to the end, noticed I have a dog, and invited the two of us to dinner at their Thursday night Pooches on the Patio, where they cooked up a free special dish for Shiloh – chicken and peas and apples.

The patio is low key and has really comfortable booths, tucked away around the back of the plaza. The interior is hand painted with a really well done undersea mural that stretches all the way to the ceiling, and a large screen TV behind the bar shows some high definition films of whales and seals and dolphins frolicking.

But the main event is the food. “We strive to serve clean fresh food….locally sourced everything, no freezer or microwave is used. It’s all organic, and we can create vegan and special order dishes,” says Averta.

Chef/Owner Levent Yurdatap came out to say hello as Whippet Shiloh was gulping down his house made food. He liked it a lot – he had never had apples before – and the serving was such a generous portion we took home an actual doggie bag. Yurdatap began his cooking career in 1993 working for California Cafe Restaurant Corporation, learning his craft in upscale hotels, high-end restaurants and working on corporate accounts as well. He went on to work at prestigious Admiral’s Cove in Jupiter as the Executive Sous Chef. Chef Levent most recently served as the Executive chef at The Falls Golf and Country Club in Lake Worth, FL.

The hosts could not have been more gracious and the food stacks up against the best anywhere in PB County. Shiloh snoozed at my feet after eating and was really happy for the invite.

Thanks Cheryl, we’ll back! | www.oceanbleugrill.com

I’ve mentioned culture vulture, gourmet foodie friend and artist Maureen Fulgenzi a few times now, so with this being a dog column, Maureen paints terrific commissioned portraits of dogs – and horses and their owners too. Working from her studio in downtown Lake Park, she can work from a photograph owners supply or she can take the picture.
Maureen was born in Westchester N.Y., studied at the School of Visual Arts in NYC and did a custom fabric design work for uber fashion masters Mary McFadden and Diane Von Furstenberg.

In the early 90’s Fulgenzi ended the fashion business to pursue her own, long-smoldering desire to become a recognized Fine Artist. She left the city to immerse herself in creating a fine-art portfolio, working in the Hamptons, Italy and traveling through Europe gaining new sources of inspiration and sophistication in her work. She excels with color and captures the personality and pure joy of animals in her paintings. She has exhibited extensively throughout South Florida, at Mar a Lago, and has been featured in many design and art magazines. She painted the huge ceramic mural in downtown Stuart and is currently working on a series of horse paintings for an upcoming show next year.