Dawgs. Ya gotta love ‘em. They are everywhere and at every cultural event I’ve been to lately. You can bring them to eat, the beach, to stores and galleries. At the car dealership I sat next to a woman with a tiny white dog whose coat said “Emotional Therapy Dog” on it. Dog is My Co-Pilot

I saw some art dogs thanks to the generous folks at the Cultural Council of Palm Beach County, who let me tag along to Art on the Road last week, a bus tour to some private artists studios. We met at the Council’s beautiful headquarters office in downtown Lake Worth. They have a great and varied show up of local artists that also happen to be international artists.

After seeing the show and getting our info packed tote bag, the tour bus trucked about 20 of us to downtown West Palm Beach to visit the studio of artist/curator Bruce Helander, who is not only a great artist but one of the great characters in the art world.

Helander was a top-notch illustrator for New Yorker Magazine using millions of collected vintage images to create fantastic collages. He had a gallery on Worth Avenue that ran for 13 years in the 80s and 90s that was so successful he opened one in Soho as well.

He is an avid collector of folk art, one of his favorite tchotchkes is of dogs – dog figurines, dogs painted on ashtrays, sad little dog salt and dog pepper shakers. He claims to have hundreds of them. “What I love about them is they are the opposite of sophistication,” he says. “I collect a lot of folk art and particularly stuff that’s so bad it’s ideal.”

Once he gets the dog art back in his studio he blows the image up, painting them on board or canvas. He had a few on display – a brown dog side view from a tin ashtray and a black Boston Terrier from a cut out wooden sculpture.

The two-story airy studio is filled with his work and all kinds of bric-a-brac, photos, sculpture, and art books. There are inscribed photos from Robert Rauschenberg and a huge new coffee table book he wrote the Foreword to on bunny artist Hunt Slonem. He did an art talk earlier this year called Dog Day Afternoon about animals in art for the Cultural Council’s Lecture Series.

Around the corner from Helander’s studio, there’s an antique store downtown that has a huge sculpture of the RCA dog that they sometimes sit outside, his furry little head cocked to one side to hear the music from the Victrola. At the recent high-end Art, Jewelry and Antique Show at the Convention Center there were poodles and Malteses and Yorkies and other sweet little yappers wearing Gucci leashes everywhere. Urban Dog Sitters, run by uber dog lover Diane Seltzer on Clematis has been in business 7 years and are busier than ever. Diane pet sits, boards, grooms, and has even reunited stolen and lost dogs with the owners as she is such a neighborhood fixture.

I’m a hound lover myself, having had whippets for 20 years, they’re smart, funny and fast. 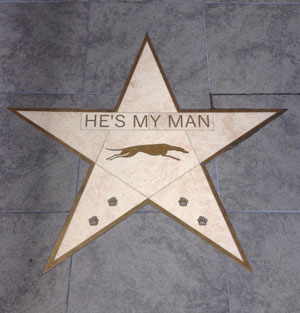 They don’t race whippets in the USA, they’re only shown at dog shows and do really well at agility trials and Frisbee tournaments. My boy Shiloh, whose one blue eye changed his life from a show dog (blue eyes are against the breed standard) to a beloved pet, tears it up on the beach and then sleeps 10 hours straight. He never barks but his look speaks volumes.

Out of curiosity I went to the Palm Beach Kennel Club out by the airport, which has been in the news recently with calls for more regulations.

The Kennel Club is a large place, I paid my dollar to get in and walked around the grounds and the main gaming area. There are stained glass murals and photos of the top racer dogs. It was filled with lots of people eating, drinking and watching the dog races as well as paying attention to the televised horse races and poker room betting.

The art of shopping at West Palm Beach’s Farmers Market

I watched a few races from the bleacher seats, they go real quick these sleek muscular Greyhounds, they are true athletes and do love to run as well as please their handlers. A Walk of Fame on the sidewalk outside is dedicated to some of the big winners like He’s My Man. There is a table about adoption programs at the track, and they work with groups like Forever Greyhounds, Greyed A Greyhounds and Greyhound Pet Adoption of Florida.

These dogs make “Greyt” pets as they say and are gentle, friendly, affectionate and really easy to care for. With a gentle temperament, they are good with children, they’re excellent walking and jogging companions and happily settle into a life of retirement. They get “retired” at just a few years old and can live for many more years.

They can serve another need as well. The newspaper reported recently that four local veterans received trained greyhound service dogs through the program Hounds and Heroes. The organization, which works along with Awesome Greyhound Adoptions, provides “therapy dogs or fully-trained service dogs for veterans with PTSD or who need mobile assistance,” according to their website.

Now this is “greyt” news. Barbara Mesi, who is the director of the program, said they’ve provided eight retired greyhound racers since the program began in 2011. It’s not cheap as it costs $4,000 to pay for all medical bills and training for the dogs and it takes about six months to train them, two of those months are spent bonding with the selected veterans to see if they are a good match.

But for the lucky vets who match up with a hound, it means a life free from using canes and a major wagging way to ward off depression and have a devoted, intelligent companion. From running for their life to helping run a vets life, that’s a real art.

Dog is My Co-Pilot a Story About Love for Greyhounds. Reviews of Art on the Road and a Visit the Studio of Artist/Curator Bruce Helander in West Palm Beach.