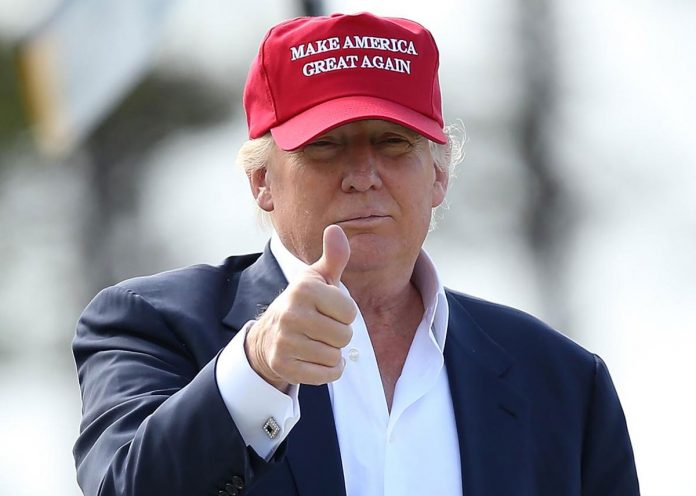 Get in the Game! with Alys and Victoria - A weekly column about love, laughter and Landing Mr. Right.

Running for political office is a lot like dating. You meet the candidates, the courtship begins, and then the vetting process. That’s when you learn all about their dirty laundry and whether you’ll be willing to wash it. Finally, it’s decision time. You’ve got one vote and you better make it count, especially when it comes to your love life. After all, you could be stuck with someone a lot longer than four years.

This brings us to Donald Trump: Bad comb-overs aside, we’ve all dated some version of “The Donald.” He’s the headline-grabbing topic of conversation around the water cooler.

Early on, he’s leading the pack: Yes, he’s got the advantage. But then again, there’s not much out there at the moment. Our friends are mixed on whether or not we should consider him a serious contender, but he’s got us talking about him. He might have money, although not as much as he claims. His strong opinions can be offensive. He bad-mouths people you admire. He’ll go to the ends of the earth (or at least the Mexican border) to defend his positions, even when they are factually wrong. His half-ass apologies demonstrate zero empathy. And, through his blunders, he keeps telling you to “make love great again.”

It’s all pomp and pageantry until you gain ten pounds and he threatens to strip you of your title.

Yet, we can’t get enough. Going out with The Donald is simply great entertainment in a dating world that can sometimes be boring and predictable.

Just because he’s your man of the moment doesn’t mean he’s got the power to stay in the game, land your heart and win your vote for Mr. Right. Keep The Donald in perspective and don’t let him distract you from that remarkable someone who could very well be your ideal candidate.

Running for Political Office is a Lot Like Dating. What Donald Trump‘s Presidential Run Teaches Us About Dating: He Keeps Telling “Make Love Great Again.”