If you’ve spent any time at all in downtown West Palm Beach you’ve seen artist Eduardo Mendieta, a.k.a. Emo’s beautiful murals. This humble, generous guy has been painting the town for several years now, with his larger than life work blowing up walls on Clematis Street, parking garage stairwells, restaurants and private office buildings.

I visited his studio in the colorful warehouse complex on Clare Street just south of downtown where he has a large studio on an upper floor. There are a lot of stacked paintings against the walls and some works in progress on the work table.

“I’m just messing around with some smaller images,” he says as I study the work of flying birds and children’s faces.

Of Ecuadorian descent, Eduardo Mendieta grew up in Union City, New Jersey and moved to West Palm Beach with his family in 1991 as a teenager. The town was much smaller then and much less developed. He liked art in school and took classes in the community college.

“It was the only thing I was really good at,” he says modestly. “After school me and my friends used to go tag on retaining walls. I got busted a few times but never arrested!” For work he began to do faux finishes and computer graphics.

Branching out, he started showing paintings in local shows and meeting lots of other local artists. 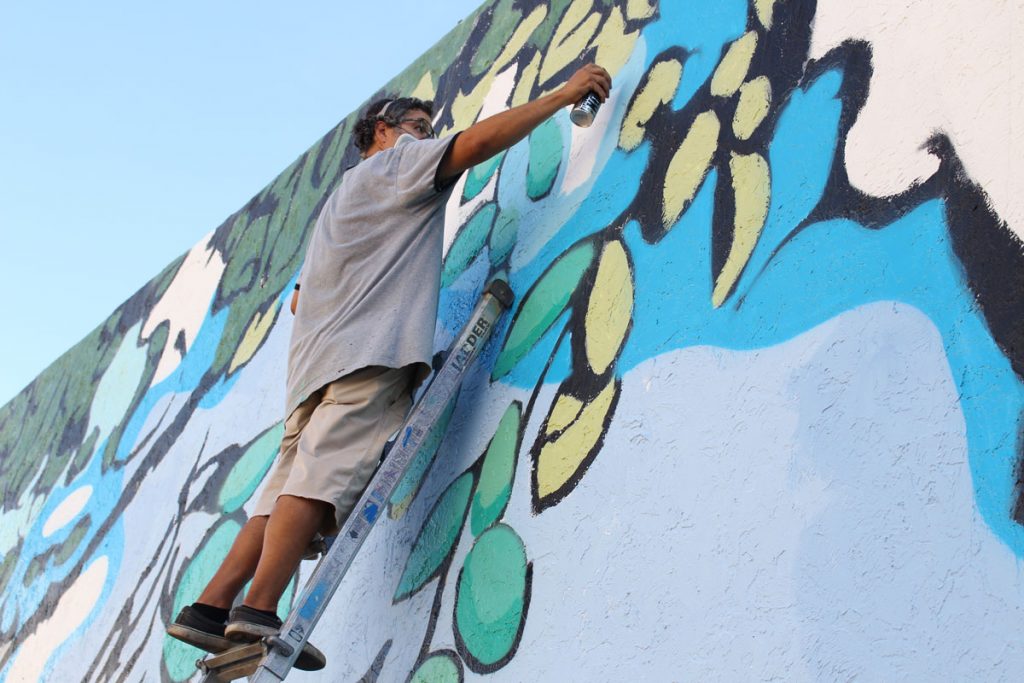 His work caught the eye of restaurateur Rodney Mayo, who bought a painting of his and then commissioned him in 2009 to do a mural on the large wall along his club Respectable Street Café which had just opened up to view when the building in the lot next to it was demolished. He designed and painted a flowing, strong image based on his 2 kids. Five months after the mural was up Mayo received a violation letter that he needed a permit for the new mural. So Mayo and Emo trucked down to the Art in Public Places office to get the permit and pay a fine. But the visit was a blessing as Emo met the good folks there who took interest in his work. The mural was up for 2 years, and Eduardo Mendieta was also introduced to Raphael Clemente at the Downtown Development Authority who was pushing to get more large scale art into the downtown area.

From then on Emo was a full time artist, getting numerous commissions including 2 more walls for the DDA. One job was to create a mural for the wall leading to the private penthouse of mega developer Jorge Perez of the Related Group, who owns CityPlace. Since it was a private building and office Emo thought not many people would see it, until the mural turned up in a photo spread in Architectural Digest.

“That was pretty cool to see my work in a magazine like that,” he exclaims.

So now Emo is in with the top art people and developers in the area – Mayo, Perez, and the DDA. Adding a new eye popping patron to his list, he has been contracted to create murals for the chain of Mexican eateries Cabo Flats. Owner Stephen Giordanella and his wife Angie give Emo themes for each restaurant and then let his wild style imagination take over from there. For the restaurant in PGA they wanted a Day of the Dead theme which meant lots of big skulls, marigolds and skeletal imagery.

“I approached the work with a lot of color splashing, golds and reds. One interesting obstacle that we turned into a positive element was the huge mirrors already affixed to the brick walls of the location over the booth seating. It would have cost a lot to tear that all down and then sheetrock and repaint the wall, so I made a design that stretched over the mirrors as one continuous mural. The other cool factor was that since mirrors have a depth of glass over the reflective surface my painting created a shadow on the mirror which adds to the effect.”

For the newly opened Cabo Flats in CityPlace, the owners wanted a wedding party theme, the resulting murals have skeleton flower girls skipping with baskets of marigolds and red peppers flying out of them all over the walls and ceiling. It’s a riot of color and design and adds to the festive atmosphere and probably one of the main factors adding to Cabo’s success with a younger, hipper crowd. This is not your madre’s Mexican restaurant.

Eduardo Mendieta is still making work for Cabo in his studio. A work in progress is a 5- foot high painted female saint on wood that is more sculptural than the murals and can serve as a type of altar piece.

Since murals can be such large daunting projects sometimes, Emo has been working as a team with 2 other artists he met 7 years ago at a graffiti expo – Jay Bellicchi and Paul Hughes. For a 400-foot-long mural, he did the main image but left room for the other artists signature work to fill in the spaces left open. The result is a grand combination of styles and colors, visually more interesting for having several different approaches to the faces and graphics.

“It’s a lot of fun to work with these guys,” he says. “I like to see how we complement each other in the finished work. I’ve done some other collaborations with Anthony Hernandez and hope to do more in the future. The Respectable Street Café wall will be redone four times a year now with different artists each time starting in April, so I hope to get in on that again. There are more and more artists now doing the murals and there are more walls opening up to be painted. It’s all good and makes for a stronger creative community. West Palm Beach has really changed a lot and come a long way since I moved here. I like to put my kids in my art, and like to think that it’s art for the people.”

—
Meet Eduardo Mendieta, a.k.a. Emo, an Artist From West Palm Beach Whose Art for the People is Seen in Murals Across Downtown, CityPlace, and Other Places.