A deluxe fun, open-air taste sensation, Elisabetta’s Ristorante lights up the downtown culinary scene with great food and hundreds of wine selections. There’s a joyous atmosphere here around food, the people eating it, and those who cooked and served it.

In a prime location on the waterfront, with detailed high-end interior design, the newly opened Elisabetta’s Ristorante is a significantly great addition to the always growing West Palm Beach dining scene.

In a market this competitive, innovative power becomes star power. Elisabetta’s is all about organic, local, and sustainability; offering refined farm-to-table food that is guaranteed to make it feel like a special occasion.

The restaurant debuted in downtown West Palm Beach led by Chef Lisabet Summa as the namesake eatery of her first Elisabetta’s Ristorante, Bar, and Pizzeria which opened in July 2019 on Atlantic Avenue, Delray Beach.

West Palm’s Elisabetta’s has a prime view to Flagler Ave and the expansive waterfront in a stand-alone building in front of The Ben Hotel, with 300 seats, 10,000 square feet, and a massive multi-tiered patio that also overlooks a grassy park dotted with light-up sculptures. 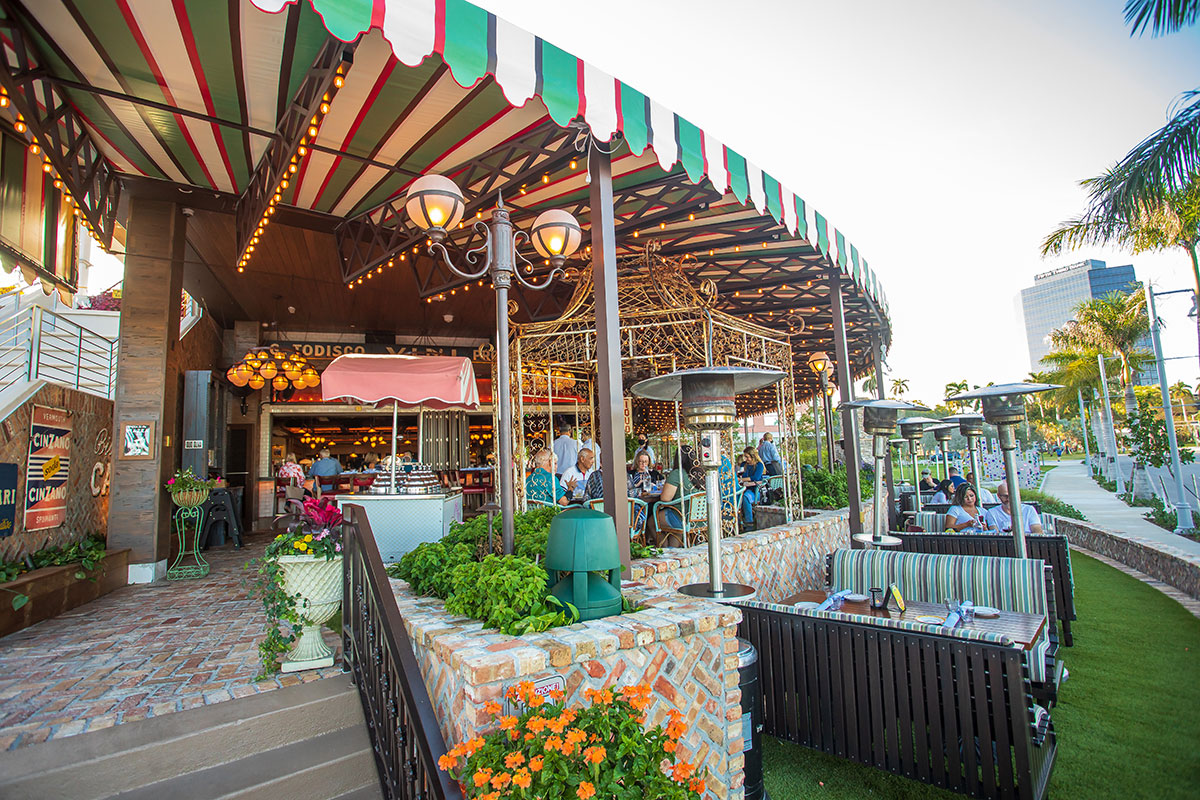 Walking in, diners are met by a huge open dining room with a carved wood and tile ceiling, booths, a large bar to the right, and a marble counter by the bustling open kitchen. The patio even has a regulation-size bocce ball court. A large 25’ tall fireplace, an indoor/outdoor bar, a 19th-century gelato cart, an outdoor pizza oven, four vintage gazebos tables for families, and a 12-seat private dining room that feels like an old-world Italian villa.

Elisabetta’s Executive Chef is Andris Salmanis, a Big Time Restaurant Group vet. He has crafted an enormous menu where everything is made from scratch with in-house dry-aged steaks, housemade pasta dishes, and locally sourced seafood, chicken, and salad options.

When they say “from scratch,” it’s all from scratch – pasta, bread, sauces, baked goods, and even gelatos. The bread is served warm from the oven with olive oil, red pepper dipping sauce. Elisabetta’s dry ages its steaks in house and cure its own salamis. The restaurant has three pizza ovens made in Naples, Italy, two located inside the restaurant and one outside.

One of the fan-favorite entrees thus far are the Grilled Australian Lamb Chops with chili oil and aioli, and the Salmon with sun-dried tomatoes and herbs. The entrees are a la carte so load up with sides—sauteed broccoli rabe with garlic and lemon along with pasta with pepper and chilis or customizer your own charcuterie board that you can make out of a variety of meat and cheese from the most refined brands.

It’s worth a spin around the restaurant to take in all the deluxe details—Elisabetta’s interior features a salumi bar faced with cool Calacatta marble with pewter bar tops, red and gold leather custom barstools. 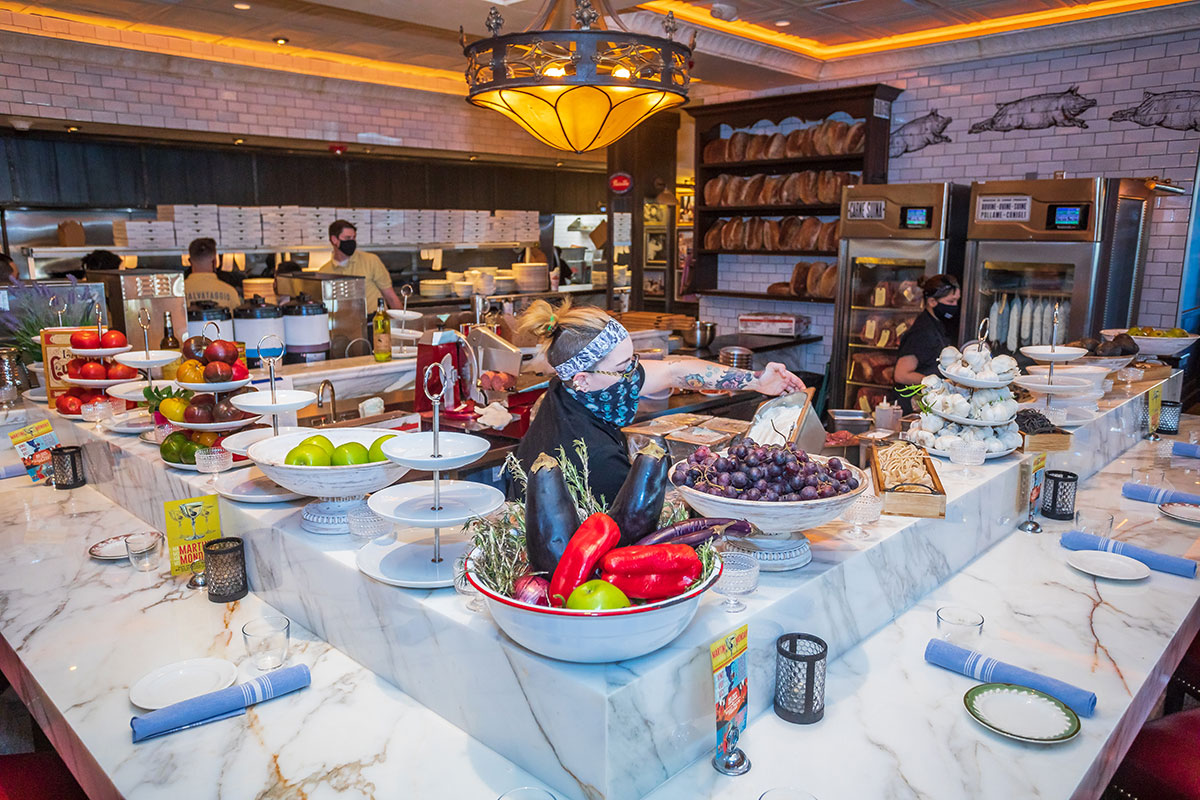 The details extend down to the original tableware commissioned for Elisabetta’s and designed by Sarah Campbell of Collier & Campbell. 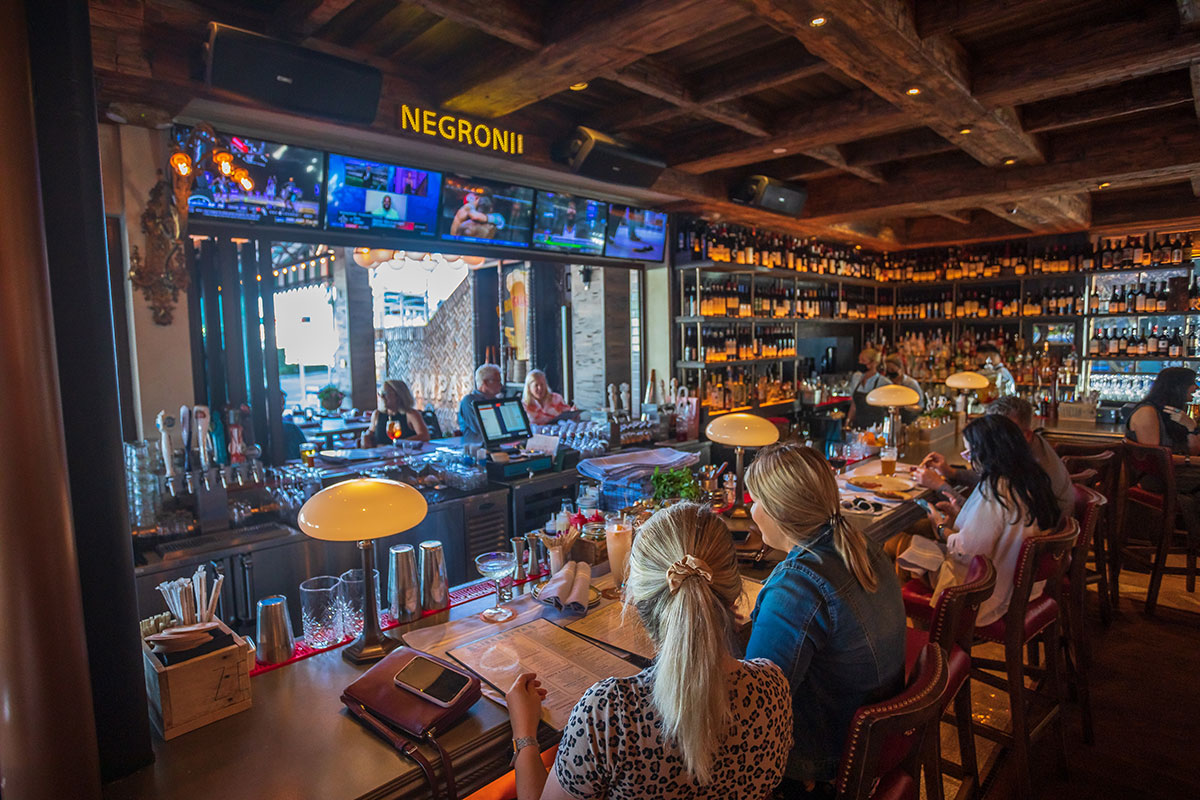 A deluxe fun, open-air taste sensation, Elisabetta’s Ristorante lights up the downtown culinary scene with great food and hundreds of wine selections—70 wines by the glass and a 400 bottle wine list, and cocktail choices. And the best thing, it is a good place for conviviality—there’s a joyous atmosphere here around food, the people eating it, and those who cooked and served it.

The restaurant is at 185 Banyan Boulevard, West Palm Beach. Online at Elisabettas.com.