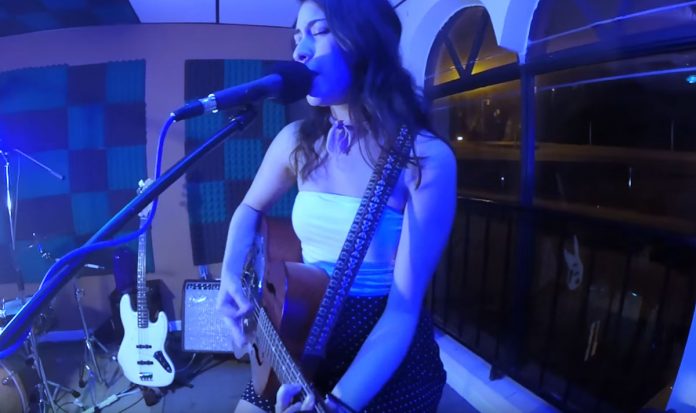 I’ve been a fan of local songstress Ella Herrara, who performs heartfelt “Twang Blues Acoustic Soul Pop” as she says on her social media pages. She performs solo with her guitar in regional venues from Delray to West Palm, .

A casual visit to her page recently yielded a pretty strong post she made in defense of her art. She had been performing somewhere when someone at the venue complained and had the management send her a note that read “The party requested happier music”. That is not something a true artist takes lightly and Herrera let fly saying:

“Once in a blue moon I run into haters that leave notes like this by me as if I was a jukebox. This kind of stuff really pisses me off. While everyone else is enjoying my music there’s always that one person that has to be a d*ck and thinks they run the world. I wasn’t put on this Earth to sing “happier” music. I’m here to sing my heart out, to sing about my mistakes, my heartaches, my experiences and my hopes for the world. Don’t press your opinions on others so quickly just because you see them in the moment that they are in you don’t know what they went through to get there. I am an artist and I will always sing whatever I feel in my heart. If you can’t handle that, tough, because I am honest in how I sing and with what I say and I sing the way I do because I don’t know who’s in the room. What if they need to hear what I have to say? What if they were meant to be there to listen to me and it touched them on their roughest day? I’m not where I want to be with my gigs but I’m working everyday and hard to get to you, not to those of you who leave me notes like this and dis and dis. But for now this is how it is (sometimes ) just waiting and waiting for my skin to get thicker.”

Strong stuff from a strong artist and bravo to Herrera for sticking to her guns. I think this will win her more fans than it will alienate.

Ella Herrera and “Happier Music”. Ella Herrera performs solo with her guitar in venues from Delray to West Palm Beach, captivating audiences with her music