Why Visit the Museums in West Palm Beach?

Fall is fast approaching and that means the art and culture scene will be heating up as the temps cool down. There are some great things to watch, see and do, here are just a few previews and this round is all about the women making it happen.

For almost 30 years American Masters on PBS – local channel WNET launched in 1986 – has been screening some stellar documentaries, they have earned 28 Emmy Awards — including 10 for Outstanding Non-Fiction Series since the year 1999 and five for Outstanding Non-Fiction Special — as well as 12 Peabodys, an Oscar, three Grammys, two Producers Guild Awards and many other honors. Now in its 29th season on PBS, the series is also seen on the WORLD channel.

An unusual and exceptional show will be airing September 25th called American Masters: The Women’s List produced by ace filmmaker/photographer Timothy Greenfield-Sanders, who previously produced a show on baby boomers. This show focuses on women who have been successful in a wide array of fields – politics, fashion, law and more. The show highlights these individuals’ exceptional achievements, struggles and racial, sexual and personal identities. All trailblazers in their respective fields, these women share their experiences struggling against discrimination and overcoming challenges to make their voices heard and their influence felt. Author poet Toni Morrison opens the film with a reading of an introduction she wrote specifically for The Women’s List. Greenfield-Sanders made portraits of all the women to accompany the show.

“As a lifelong feminist, I’m proud to have made The Women’s List and excited to have another one of my films join the American Masters library,” said Greenfield-Sanders.
“As with The Boomer List, Timothy has chosen an inspiring mix of talented voices,” said Michael Kantor, executive producer of American Masters. “Brought together, these 15 stories of different modern masters make for a profoundly moving film.”

Here is a sampling of quotes from the show: 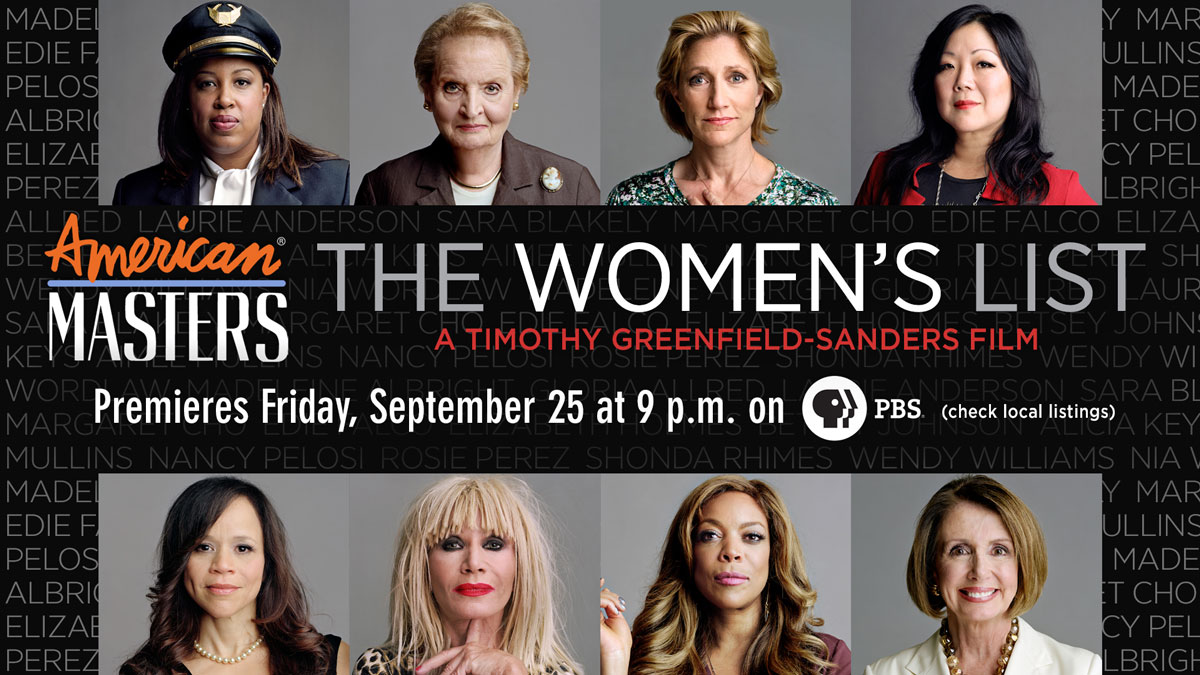 ⇒ Madeleine Albright, former U.S. Secretary of State, (1997-2001)
“Leaders are made by the situations they are involved in. I think that some rise to the occasion and some do not.”
⇒ Gloria Allred, lawyer
“A feminist is simply a person who believes in legal, social, political and economic equality for women with men.”
⇒ Laurie Anderson, artist
“I am a New Yorker, one; I’m an artist, two; I’m a woman, three.”
⇒ Sara Blakely, entrepreneur
“Spanx really came from my own butt. I did not like the way it looked in pants.”
⇒ Margaret Cho, comedian
“When I was 14, I told my mother I was going to drop out of high school and go do stand-up comedy. All she said was ‘Oh maybe it’s better if you just die,’ because it was killing her that I was doing this.”
⇒ American Masters: The Women’s List, premiers nationwide Friday, September 25, 9-10 p.m. on WNET and is available the same day on DVD via Perfect Day Films Inc.

“100+ Degrees in The Shade” is a monster art show and a landmark survey of what’s going down and coming up in the art scene in South Florida. This expansive show will include works in all media including sculpture, installation, painting, photography, video, mixed-media and works on paper. It will be held in several venues including Bridge Red, Carol Jazzar, Girls’ Club, Swampspace, and The Laundromat from Nov. 14, 2015 through January, 16, 2016 with opening receptions on Nov. 13, Nov 21st, and Nov. 22nd. There will be book signings and film screenings and even some special pop-up events.

The exhibition curators are Jane Hart, Chris Ingalls, and Nina Arias who collectively have worked in the US and in Europe at top galleries and museums. An accompanying book by will be published by [NAME] Publications and there will be texts by Jane Hart, Erica Ando, and I will be writing an essay overview of the South Florida art scene since the 1980s.
The name of the exhibit stems from the Florida heat and the fact that over 100 artists will be participating. 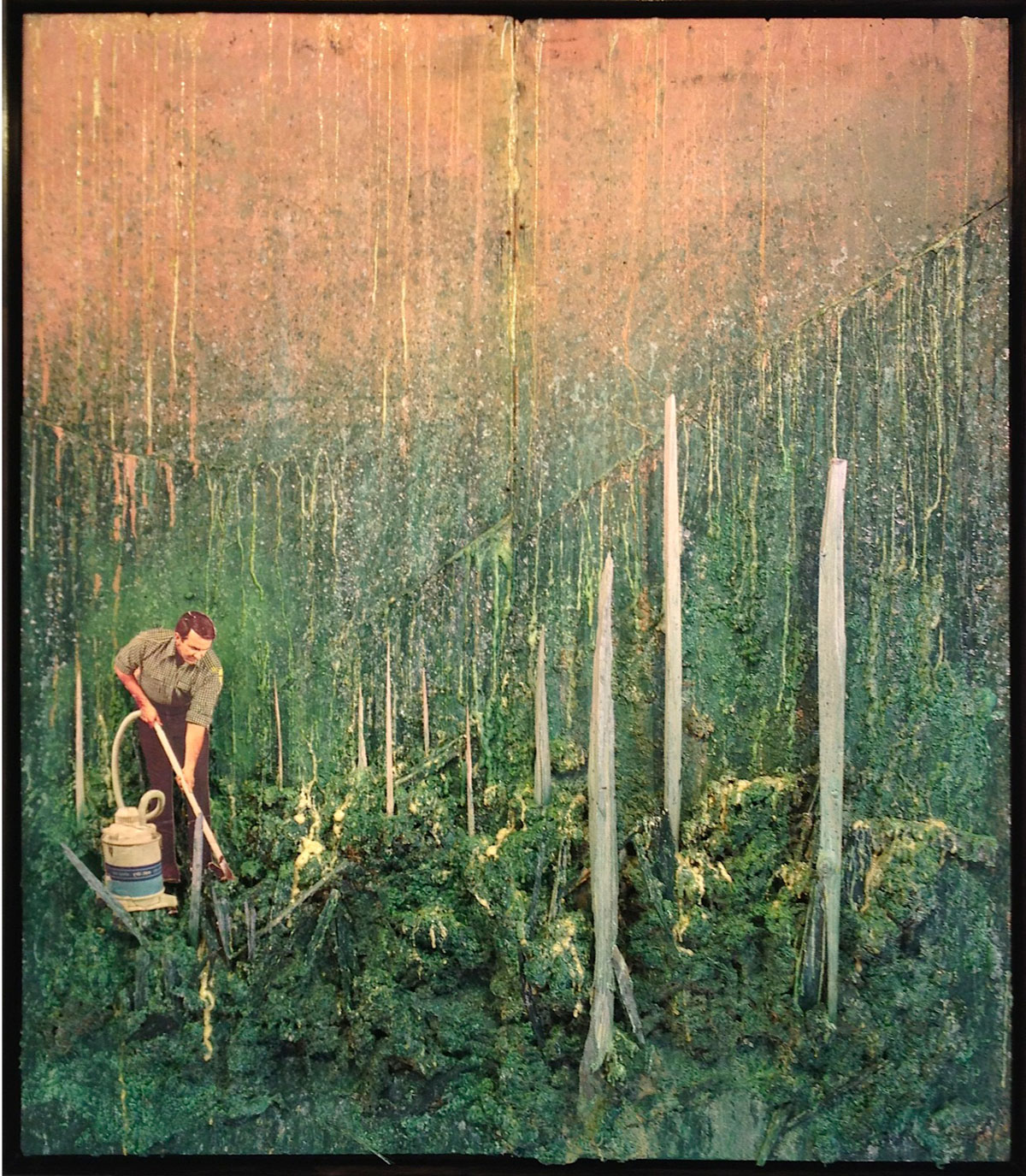 A sprawling show unlike any other that has been presented in South Florida, it includes notable West Palm Beach artist Phillip Estlund who exhibits with Gavlak Gallery on Worth Avenue. His art takes its cue from photography and nature and architecture. Recent work includes odd little reconstructed houses that melt into the walls and floors; and chairs festooned with flowers. His collage paintings portray people in an overwhelming natural landscape where Mother Nature, kind as she is, will eventually win out.

Carlos Betancourt, another participating artist, is releasing a gorgeous oversized glossy book called “Imperfect Utopia” through Rizzoli Publishers this fall of his lush, tropic inspired photo collages and installations he has exhibited all over the world. There will be special art related events, catered food and festive drinks at all the openings to celebrate this long overdue survey.

Women Artists at the Norton

The Norton will be welcoming some diverse women artists this season. The fall schedule includes the highly anticipated and timely photography exhibition by Mary Ellen Mark: Streetwise Revisited, her 1983 series that follows a fiercely independent group of homeless and troubled youth. The acclaimed photographer passed away just this year in May 2015, making this all the more vital. It was Mark’s last long-term photography project. The exhibition, organized by the Aperture Foundation, opens December 10 and runs through March 20.

Another show “Still/Moving: Photographs and Video Art from the DeWoody Collection,” will be on view Feb. 6 – May 15, and is part two of last season’s Norton-organized Beth Rudin DeWoody show highlighting the unique, bizarre and extensive West Palm Beach and New York-based contemporary art collector’s collection.

Fall is coming – let’s hear it for the girls!