In the heat of the heady tropic summer, West Palm Beach excels for being outdoors seeing, tasting and hearing what’s new – along with some history of what has come before. A wondrous way to do this is by joining up with a food tour, there are now tours in almost every area of Palm Beach County.

Recently, the Annual Pairings Food Wine Event in downtown WPB took place for the 4th year in a row. I hooked up with our trusty – and hungry – stylish marketing Director Teri Sturgell to take on the town, one small plate and glass of something or other at a time.

Our historic downtown office at The Harvey (circa 1926) was the perfect meeting spot. Teri had just come from a full day of helping local businesses spread the word in our magazine and website as well as sporting a funky new blue metallic tipped French manicure. I had been holed up writing stories so was itching to get out do some tasting.

We both changed into flat comfortable walking shoes as the tour spans several downtown blocks and headed down the elevator to pick up our passes. The friendly group from Downtown West Palm met us under the tent by the Library on Clematis, signed us in and handed us our neck badges and passport guide. The guidebook had a much needed map since there were 32 stops to make over a 6 block area. We decided to head down to the end of Clematis to start there and work our way west.

Our first stop was Tin Fish where the pairings event was held upstairs in the second level bar. They had a delicious Tin Fish tea with some kind of citrusy flavor, plus a choice of either red tomato based conch chowder or a cream based shrimp and corn chowder. I had the red conch, which was hot and spicy and loaded with veggies, Teri had the cream shrimp chowder which I also was jonesing for but you’re only allowed one.

E.R. Bradley’s was the next stop and it turned out to be one of the highlights of the night. They own the waterfront view with their spacious patio, two level seating and they had a swinging Country pop band playing for all us foodie fans. They served up a mouthwatering generous sized Bahamian conch fritter topped with a lovely spicy aioli. To wash it down there was a Rum Painkiller that paved the way for more pairings.

From there we rounded the corner up Datura to hit up Avocado Grill. Too bad The Bee was closed as I would have loved a drizzle of blue honey on something. Unfortunately, the Grill had a long line of people snaking down and out into the street in a way that seemed a bit hazardous to stand in line too long so we moved on.

Bar Louie back on Clematis had a really tasty chicken flatbread with Thai spicy sauce and a Spaingarita  – a combo of lime based margarita mix with red wine and fruits – to pair with. Really yummy and a great vantage point to people watch at the base of the park where another band was playing top 40 music and kids were jumping around in the water fountain.

Old reliable Rocco’s Tacos won hands down for tastiest homemade spice-dusted taco chips and a delightful mash of guacamole. They served up a very generous dish studded with those crave-worthy chips and a classic margarita to pair it with. I like the little closed-in wooden patio they made by taking over a parking spot in front of the restaurant. It gets awfully crowded on those sidewalks and it’s not good to spill out into the street with such a crowded event so this was an ideal solution.

Up Clematis Off The Hookah had tender grilled chicken skewers paired with a Chardonnay. 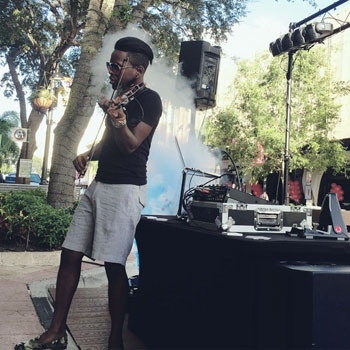 A big wonderful scene awaited at C Street Café and Wine Dive across the way. C Street was serving up a veritable buffet of sandwiches, pastries, mini muffins, coffee and more. A line had formed and I sneaked in for 2 of the berry muffins and a chocolate-chip muffin cookie hybrid thing. Delish. Wine Dive had the food bar way inside in the back but the real show was out front as they had hired DJ Violinist Timothee Lovelock to perform. A wildly unique act, stylish performer Lovelock had a DJ station pumping out a fierce combo of soul, hip hop, R&B and more as he accompanied the mixes on electric violin. Now that’s an act going the extra mile, a real crowd pleaser who also had smoke machines shooting up and ventured out into the throngs while fiddling. Check out his pictures and performance video on his site djviolinist.com and hire this guy for your next shindig, I’m his new biggest fan.

Lovelock says on his site “I had the pleasure of producing wonderful sounds of music for my City West Palm Beach!!! This event was such a successful event mainly because of the support and love of the people. From playing for toddlers to teaching adults how to play the violin, this is an event that will stick in my memory for quite some time. Thank you to all the participating restaurants and West Palm Beach for having me.” Gratitude and talent, now that’s a pairing!

Longboards brought out the jumbo platters of wings and ribs, fun to nosh on while watching surf movies and watching the mural being painted across the street. By the time we had some sweet and tasty little cupcakes at Café Sweets Bakery, Teri and I had our fill.

All in all a success, and there was no way to actually sample all the food at all the stops which is good as too much is not nearly enough. See you next year for sure.

To get in on an upcoming food tour, book a ticket on the Taste History Culinary Tours of Historic Palm Beach County, which are held on the first, second, third and fourth Saturdays of each month, year-round. Cities visited on a rotating basis include Northwood Village/West Palm Beach, Lake Worth & Lantana; and Delray Beach & Boynton Beach.

The Tour website (www.tastehistoryculinarytours.org) says they are an enjoyable culinary cultural journey 3-4 hours long, a combination of bus riding and 4 to 6 blocks of walking. At least three to four eateries are visited for food tastings per tour and some eating experiences are standing-only. The tour also travels to cultural districts, historic buildings and art galleries. I’ll report on the tour I’m taking later this month. After all, a girls gotta eat!

The Medium is the message in new art show by Jacqueline...

Sandra Schulman
Rust & Wax Record, a place for discovering and expanding your love of music, free of judgment.