When you live in a coastal city like ours, you are reminded every day of the natural goodness that comes from the land and sea. What to eat? Where to go? That’s the thing fixed on our minds most days, as we discuss and argue over the many food choices in town.

As many trends we’ve seen in the last few years seem to only be getting bigger, Greek food is still one of the hottest topics among foodies in South Florida; and the reason is simple. This food brings comfort, wellbeing, and community. So, who’s game for some καλό φαγητό? 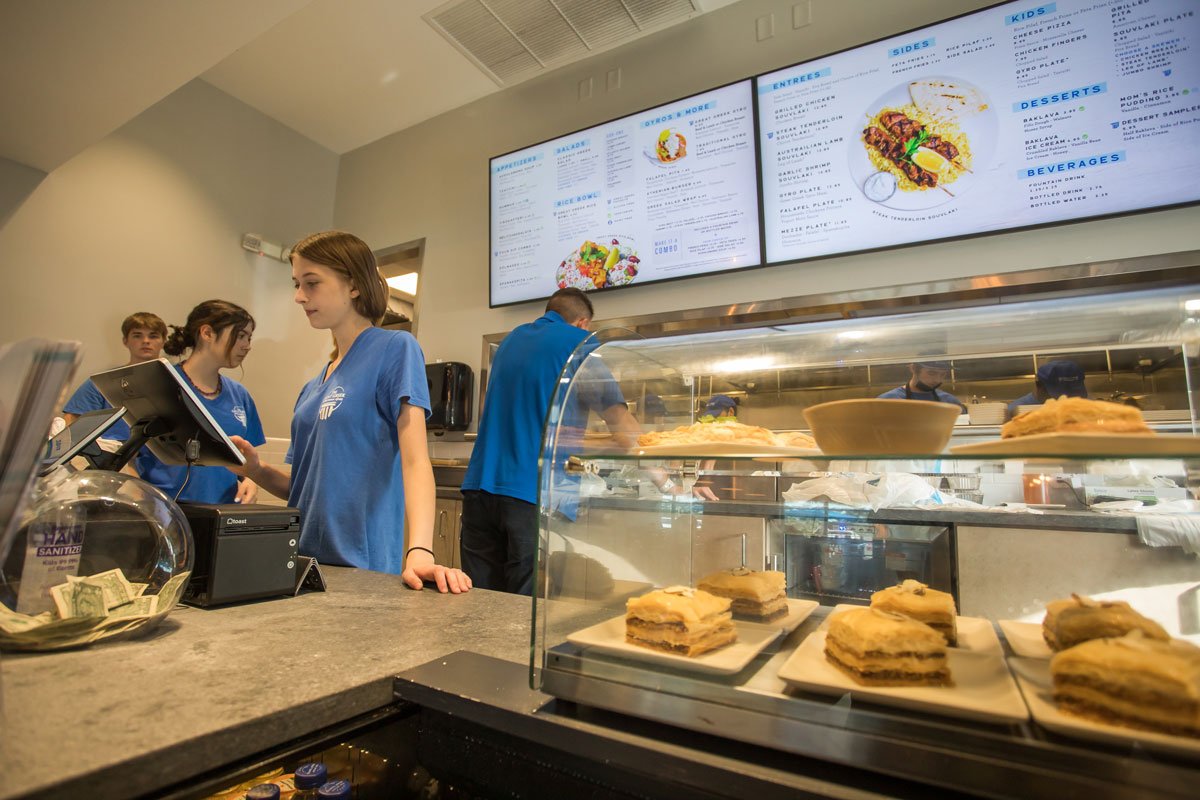 Founded in 2011 by two third-generation culinary trained restaurateurs Nick A. Della Penna and Trent Jones, the restaurant franchise originally debuted in Henderson, Nevada. It wasn’t long before they partnered with Ray Titus of United Franchise Group, and together they quickly grew the franchise with over 130 locations across the country.

From the team behind the new Greek sensation, comes their latest outpost: The Great Greek in West Palm Beach, a single-story white and blue Corinthian-like distinctive structure, which portrays one of the main features of ancient towns and cities on the Greek mainland.

Food is family-oriented. You’ll find an assortment of traditional Greek dishes for the whole family starting with their Tzatziki sauce, a very popular appetizer dip, consisting of Greek yogurt, cucumbers, garlic, and . . . you got it right, extra virgin olive oil.

If you’re not a fan of Tzatziki, try their Hummus—made from cooked, mashed chickpeas. It has been eaten for thousands of years—even ancient Greek philosophers Plato and Socrates wrote about the benefits of hummus.

The beauty of these two dips is that you can scoop them up with some flatbread like pita or you can have them as a companion food that’s been grilled or even with falafel, which is a combination of garbanzo beans, herbs, and spices. Favorite? Both are delicious if you ask me. But if you make your determination based on health concerns, Tzatziki.

Some other popular items to consider at The Great Greek include their classic Greek salads and various assortments of Souvlaki. The salads are hearty and delicious on their own or with some added items, such as a shrimp or lamb skewer, nicely topped with their homemade vinaigrette, made fresh daily in their kitchen. Souvlaki is one of the most well-known Greek foods found in almost every Greek restaurant around the world. At the Great Greek, Souvlaki is made from chicken, lamb, or beef, served with vegetables like a kabob.

Perhaps the highest-calorie food on their menu is the Gyro. But, can you avoid it?

You simply can’t visit a Greek restaurant without trying their gyros. These yummy Mediterranean delights are spiced just right. Flaky thin juicy slices of roasted lamb, beef or chicken, gyros are the most popular Greek food in America.

If you’re looking to indulge yourself, try feasting on their Feta fries. But whatever you do, don’t skip dessert. Ice cream is a big part of the Greek summertime culture, and that also holds true for the Great Greek family. Their Baklava Ice cream made of crushed Baklava with vanilla ice cream topped with honey is delicious!

Food at The Great Greek Mediterranean Grill is both flavorful and healthy; well worth a repeat visit.

If you plan to visit, their West Palm Beach location is at 7038 Okeechobee Blvd., 3341. Try other locations near you on their website.