A Blossoming Bouquet of Flowers

Artist Halim Flowers's latest exhibition of new works at DTR Modern in Palm Beach is a remarkable display that illustrates an in-depth understanding of composition and vibrant color mixes as well as an accurate perspective on art history and a mature outlook on art and life.

Halim Flowers amazing journey to becoming a respected and collected artist took a long and terrifying circuitous route that often looked like a one-way path to nowhere without hope for optimism and normal life. When the artist was only sixteen years old, he was unfairly tried and convicted as an adult under the accomplice liability doctrine of felony murder. He was released in March 2019 after serving twenty-two years of a forty years to life sentence in the DC Department of Corrections.

During those years of incarceration, Halim discovered that he had a special attraction to and a love for the arts and literature. As a teenager, he spent the majority of his time behind bars investigating many aspects of the arts and realized that he had a true passion for assimilating knowledge and inspiration for self-improvement and learning skills. Prison became his college for learning, and paradoxically offered him direction and skills that he likely would have not acquired on the street.

Flowers now writes short stories and poetry and is working on a graphic novel, refocusing his ambition and energy from the temptations of the DC street to sharing his message of love and self-help and using the arts to express and work through the trauma of growing up in poverty and a difficult home life surrounding addiction. 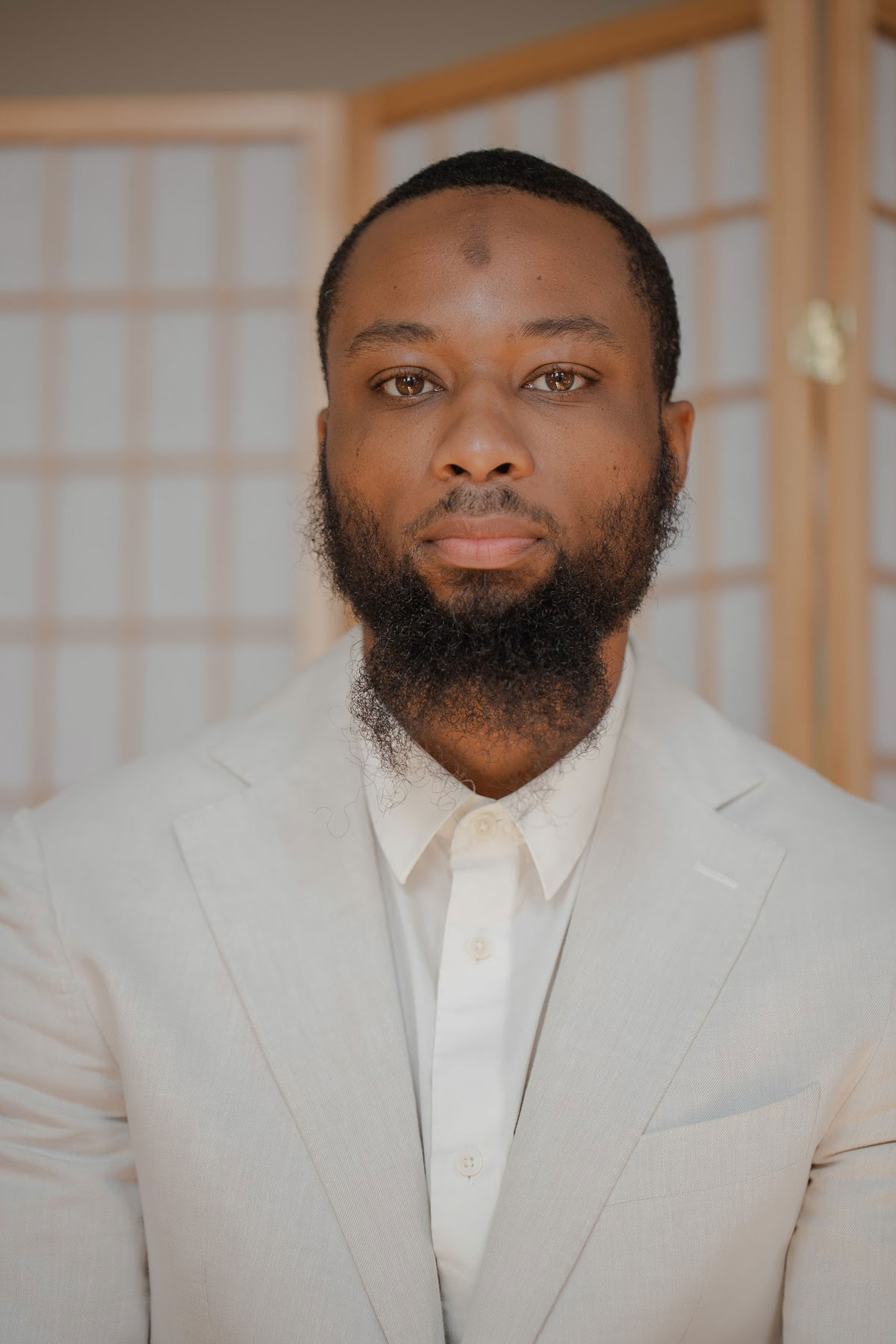 (In this photo, artist Halim Flowers)

With a second chance and to make up for the lost time, Halim became deeply engaged in exploring contemporary painting with a distinct message. With a self-taught style that brings to mind some of the early works of Basquiat with a touch of abstract expressionism included for good measure, Halim Flowers has found a receptive audience of collectors and critics who continue to be enthusiastic about his fresh approach to painting and the inventive technique attached to it. He was first discovered by Ted Vassilev of DTR Modern in Washington, D.C. Art world critics soon took notice and word began to spread as he gained professional attention with his dramatic compositions of shapes and word equations. It is not surprising that Flowers has had increasing interest from collectors and institutions, and a major early triumph was his inclusion in a show at MoMA PS1 in Queens, where he received widespread attention and critical respectability that most young artists strive for but do not often receive. Now Mr. Flowers is moving full speed ahead to catch up, and the quality and maturity found in his recent work are clearly supporting his reputation as he continues to streamline his unique approach to image and word equations on canvas that are becoming recognizable and celebrated.

His latest exhibition of new works at DTR Modern in Palm Beach is a remarkable display that illustrates an in-depth understanding of composition and vibrant color mixes as well as an accurate perspective on art history and a mature outlook on art and life. 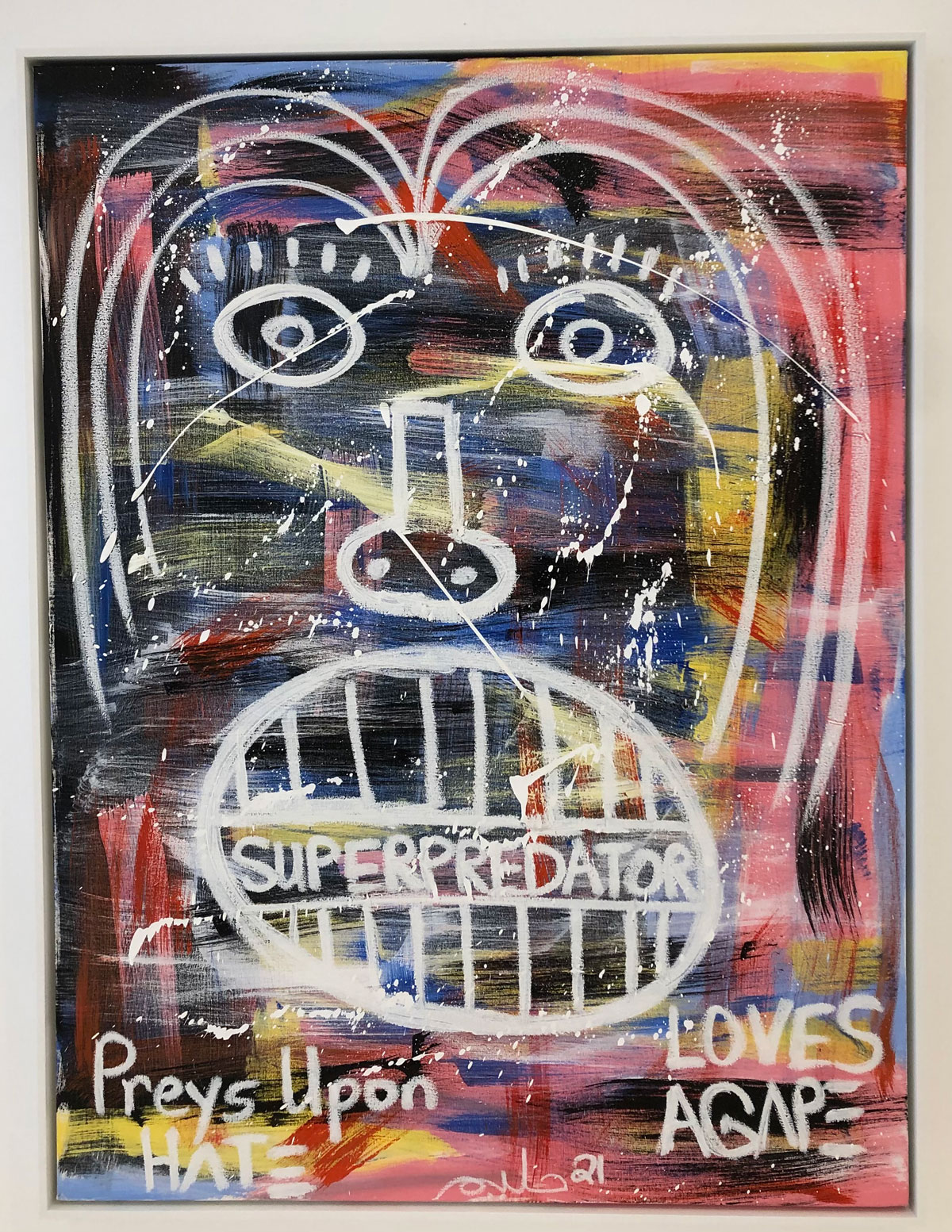 Flowers’ paintings are chock-full of vitality and street-smart inventive initiatives that often speak in coded language and with symbols and words/letters applied over a handsome abstract expressionist base of solid brushstrokes.

In this recent series of exuberant abstract narrative canvases, Halim Flowers demonstrates a natural command of compositional elements, which frequently reveal a cartoonish cast of characters that often intermingle and overlap, creating a sense of depth and drama.

The exhibition at DTR Modern is a testimony to the vibrancy and determination of the human spirit to overcome impossible odds on the road to independence and professional achievement with a newfound freedom of expression that is obviously inherent in these works.

For more information on Halim Flowers, please visit DTR Modern Palm Beach at www.dtrmodern.com/portfolio/halim-flowers and the artist at www.halimaflowers.com.

Bruce Helander is an artist who writes on art. He is the former Editor-in-Chief of The Art Economist and a former White House Fellow of the National Endowment for the Arts.

ShareTweetJoin Our Newsletter
Around the CityThe Arts

The Medium is the message in new art show by Jacqueline...

Sandra Schulman
Rust & Wax Record, a place for discovering and expanding your love of music, free of judgment.