SunFest 2016 officially came to a close Sunday, May 1st. By general consensus, even without a survey, this year the festival provided possibly the biggest lineup takeover in a long time. During the 5 days event, the weather was wonderful and that made partying in Downtown West Palm Beach waterfront much more fascinating.

As of today we do not have yet an official figure of how many people attended SunFest 2016, but don’t be surprised to know it was one of the largest ever in the festival’s history.

Opening night was a success with the Ford and Tire Kingdom stages more overcrowded at the same time than usual. Meghan Trainor appeared on stage donning a glittery jacket along with a crop of confident female dancers and set the night on fire and included few new songs of her coming album Thank You, available May 13. She expressed she was happy to perform again for the first time after her surgery and West Palm Beach fans couldn’t feel any happier. Here’s a video about it by Meghan Trainor herself:

Missed you guys so much❤ thank you @tophten for being my beautiful queen tonight! Loved seeing family too😍 ..🎥: @ryan.trainor

Deciding the best gigs during this year’s festival is hard. Every artist that came to perform gave their fans a reason to love them and keep supporting their music. These are our own picks for this year:

The Miami native was spectacular, dancing all over the stage non stop. The 26-year-old singer wiggled, took his shirt off and drew everyone crazy with “Get Ugly” and many other songs. Here’s a clip by VideoGJC:

If you missed an interview with Steve Aoki before his performance at SunFest, you can still read it here, but nothing put on paper can tell you about the excitement he brought on to what has become SunFest’s Friday’s EDM night. From champagne showers to getting caked, revelers loved every minute of the show. When you go to an electronic music concert with Aoki, you’ll find good energy and he makes it very enjoyable with robots, cake throwing, confetti, selfies, you name it. You’ll really be blown away, believe me. Here’s a take by Juan Lopez:

Duran Duran proved Millennials that music made in the 80’s is still the best pop music made in the world ever. They came on strong with video screens and Simon Le Bon’s charismatic performance stirred the crowd at SunFest’s opening night with a reel of their most popular hits and also from their new album “Paper Gods”. They also honored David Bowie with “Planet Earth” and Prince to whom they dedicated “Save A Prayer”. Here’s a summary by VideoGJC:

Alabama Shakes on Sunday, May 1

The performance by Alabama Shakes, the winners of four Grammy Awards —Best Alternative Music Album for ‘Sound & Color’, Best Rock Performance and Best Rock Song for ‘Don’t Wanna Fight’— was as excellent as expected. This amazing band left everyone in awe with their songs during a complete hour and a half show. Brittany Howard, Alabama Shakes’ lead vocalist and guitarist thanked all who attended their SunFest’s closing performance in a way no artist has ever done before in West Palm Beach. Hey, Brittany, we owe that to you! Here’s a take by VideoGJC:

I think the duo must have felt surprised to see the millennial crowd that followed their performance among the regular 90’s most demanding fans in the city. During their performance, SunFest 2016 proved that it undoubtedly is the most lively moment West Palm Beach has and that the festival really has a reputation for quality and legacy among the biggest performers in the music industry. 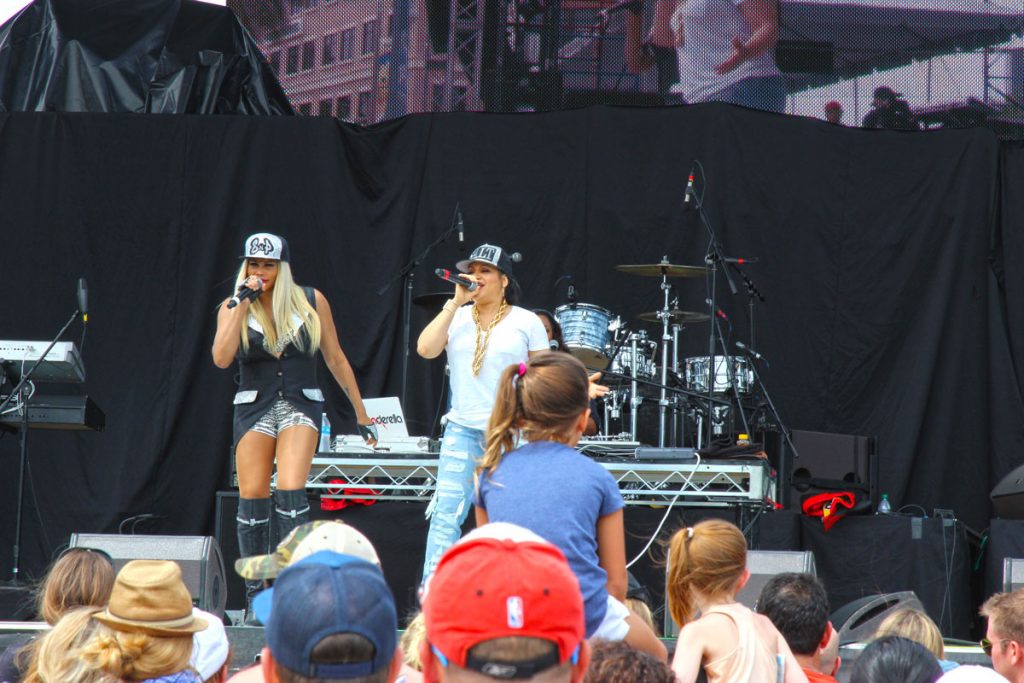 SunFest 2016 nailed it with a new food experience!

2016 ushered a revamp to the festival’s traditional food court which is now dubbed “The Eatery”. Kudos to the organizers for the new upscale row of vendor booths providing a heavenly experience when you wanted to grab something to eat.

The Eatery featured a large exclusive variety of food like Nashville hot chicken, waffle fried chicken, Gyros with Greek Chicken, flatbreads, curry chicken shish kebabs, vegan-friendly bowls, Hash Brown Waffles, and a more eclectic menu than the traditional offer at festivals. “The Eatery” has freshen up the eating experience at the event and even included a Chick-Fil-A stand. Of course, the fest’s popular Island Noodles kiosk and SunFest’s fanciest dish, the Tropical Pineapple Chicken were our award-winning choices this year again.

SunFest 2016 did not fall behind the latest fashion trends in music festivals. A mixture of boho chic and hipster attires popped up among revelers. We witnessed some of the coolest spring and summer styles around, printed shorts, vintage looks, floppy hats, tees, sunnies, and high-waisted shorts that made people attending this year’s festival stunningly gorgeous. But we would have also loved to see more memorabilia about SunFest this year. Here are some of the best photos…

Overall, SunFest 2016 was an amazing experience. The lineup was well selected and the event’s organization and safety were highly noticeable. These 5 days have been the most entertaining days of the year. We look forward to another unique experience in 2017.