Trained and donated to veterans by Awesome Greyhound Adoptions, Inc and their Hounds and Heroes program, these dogs perform tasks for veterans with Parkinsons Disease, MS, Traumatic Brain Injuries, PTSD, and are also trained for mobility assistance and to perform other tasks unique to their new owner. 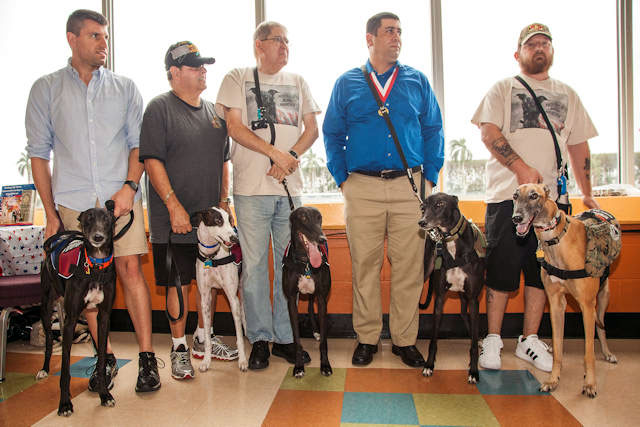 Pictured at the AGA’s Hounds and Heroes Presentation are (L to R) John Yannotti, Jr. and his dog Glory, Rich Herbst and his dog Hero, Tomas Issacs and his dog Dutch, Nelson Melendez and Stormy, and Steve Mundell with Buddy. All are Army veterans except for Steve who is a Marine.

“The retired racers are trained for a total of six months with the trainer (24/7 wherever the trainer goes)” states Barbara Masi, President and Founder of AGA and the H and H program. “The last two of those months the dog is paired up with their veteran and the training is with all three until there is a smooth transition for the veteran to take the dog. Ongoing training is also provided when appropriate – new tasks to be learned to assist the veteran or others that they may not have used in some time that need a refresher course.”

Head trainer, Carolee Ellison was presented with the 2015 golden greyhound Volunteer of the Year award. Her diligence and dedication challenging these dogs to perform at the highest level is appreciated by their original racing owners, as well as their new veteran owners.

Sponsors of the dogs presented were: Glory – Whole Foods Market Wellington; Dutch – Palm Beach Kennel Club; Hero – Christie’s Critters Foundation and Woof Gang Bakery; and Stormy and Buddy were funded through assorted fundraising activities of the group. Radar, one of the dogs currently in training, was sponsored by LocalDines.com and Jerry Herbst, Jody Johnson, Linda and Ron Herman and JCB Enterprises.

To date, 12 retired racing greyhounds have been placed by Awesome Greyhound Adoptions’ Hounds and Heroes program and there are currently two more in training and many lined up to come in to this unique program.

The all volunteer group works diligently supporting the program through fundraising events and the charity of the community. For additional information or application for pet or veteran service dog adoption or to donate visit AwesomeGreyhoundAdoptions.org.

Receivers of the AGA’s Hounds and Heroes Presentation

Captain Isaacs joined the US Army in September of 1965. He graduated from Officer Candidate School in 1967 and served in Vietnam from 1968 to 1969 with the 5th Special Forces Group Airborne, 1st Special Forces. His branch was Military Intelligence and when in Vietnam his Unit was Command and Control North, MACVSOG, He was the S-2 (Intelligence Officer). He was Company Commander at Fort Bragg, North Carolina from 1969 to 1971. His medals include: Bronze Star, Army Commendation Medal, Good Conduct Medal, National Defense Service Medal, Vietnam Cross of Gallantry with Palm, Vietnam Service Medal, Vietnam Campaign, Presidential Unit Citation with oak leaf cluster, Meritorious Unit Citation with Oak Leaf Cluster, Vietnam Cross of Gallantry with Palm, Combat Infantry Badge, Basic Parachutist Badge, Vietnamese Parachutist Badge. Thomas worked primarily in Military Intelligence and held a Top Secret Security Clearance. He was Honorably Discharged from the service in 1973.

Sergeant Melendez enlisted in the Army directly after high school in July of 1998 as a 19 kilo M1 Armor Crewman. He graduated Basic Training in November of 1998. He served in Bosnia from September 2000 to March 2001 and in Iraq from May 2003 until July 2004. During his service, he won four Army achievement medals, one Army Commendation medal, two Army Good Conduct medals, one National Service medal, one Global War on Terrorism medal, one Presidential Unit citation, one Overseas Service ribbon, two Overseas Service bars, one NATO medal, one Army Service ribbon, one Professional Development ribbon and, just this week, Nelson received the Governor’s Veteran’s Service Award. He left Active Duty in March 2005 and was Honorably Discharged from the Reserves in July of 2006.

Specialist 5 Herbst was inducted into the Army in July 1966. He attended Basic Training at Fort Jackson, South Carolina and trained as a Heavy Wheel Mechanic at Fort Bragg, North Carolina. He served in Viet Nam from May of 1967 to May of 1968 where he went on convoys to DaNang. He also made several chopper missions to the forward Landing Zone where he and his team repaired vehicles. These convoys were repeatedly attacked. Specialist Herbst also participated in Search & Destroy missions during his time in-country. He was Honorably Discharged in May of 1968.

Corporal Mundell joined the Marines in June 2002 and graduated Boot Camp in September 2002. He completed Marine Combat Training in October 2002 and Military Police training in December 2002. In February of 2003, Corporal Mundell was deployed to Iraq in Operation Iraqi Freedom conducting base security and convoy security. He returned to Cherry Point, North Carolina in October 2003. Then, in August 2004 he was deployed to Fallujah, Iraq in Operation Enduring Freedom conducting convoy security, enemy prisoner of war transport, building clearing, and recon patrols. In February 2005 his vehicle was hit by a roadside bomb causing Traumatic Brain Injury. Steve received the Good Conduct medal, the Combat Action medal, the Operation Iraqi Freedom ribbon, the Operation Enduring Freedom ribbon, the Presidential Unit citation, the Naval Unit citation, the National War on Terrorism ribbon, and the Sea Service Deployment ribbon. He was Honorably Discharged in June 2006.

Sergeant John Yannotti, Jr. enlisted in the US Army the day after his 24th birthday in 2002. He completed his basic training at Ft. Benning, GA and graduated as an Indirect-fire Infantryman. His first tour of duty was in South Korea about 7 kilometers from the De-Militarized Zone. John then spent a year in Iraq traveling the country on multiple missions. His unit was dubbed “The Nightriders” by President Bush because most of their missions were executed in the dark of night. During this tour the Blackhawk helicopter John was aboard crashed. He lives with the pain of that crash every single day but he tries to stay positive and remember that many of his brothers and sisters didn’t make it home again. He was honorably discharged in December of 2004 but in September of 2007, John returned to the Army Reserves where he has found a mission he loves. He is proud to say he has helped, and continues to help, our brave service men and women as an Army Reservist.

Barbara Masi was present at the Hounds and Heroes Presentation. Barbara is the President and Founder of Awesome Greyhound Adoptions, Inc.. she can be contacted at 561-737-1941. Visit the foundation website here: AwesomeGreyhoundAdoptions.org