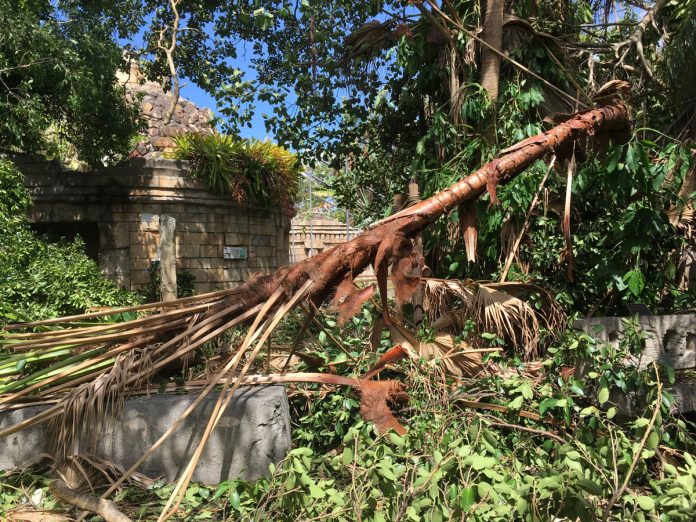 Hurricane Irma recovery efforts at Palm Beach Zoo are underway. In a percent press release, Palm Beach Zoo & Conservation Society has announced that all animals are accounted for, and that the Zoo sustained massive damage to many of its Ficus and Banyan trees across its 23-acre campus.

Fortunately, all of the Zoo’s main buildings and the majority of its fences appear to be intact.

“We are fortunate that no people or animals were injured,” explained Dave Ruhl, the Zoo’s facilities director who served as Incident Commander during the storm. “The amount of tree damage inside the Zoo is a bit overwhelming.”

Zoo officials are now working around the clock to assess the scope of damage around their campus and return animals to their homes.

“Some of the trees that suffered damage are at least 50-years-old; there’s a lot of history there,” explained Ruhl.

PHOTO GALLERY: some of the damages caused by Hurricane Irma
1 of 12

Zoo officials are also strategizing with an arborist to restore several of the large trees that have fallen or toppled over inside the Zoo. They are using a 60-ton crane to remove and restore smaller trees and a 300-ton crane for bigger trees.

“We expect to have crews and cranes on campus for the next few days,” explained Ruhl. “We are asking the public to refrain from walking their dogs and entering the main parking lot until we can repair broken limbs and tree canopies.”

In a sad twist, Hurricane Irma is also being blamed for three animal deaths at the Zoo. They were discovered during morning checks immediately following the storm. Rudder, an older otter with a heart condition, passed away, likely from the stress of the storm. The storm also claimed the life of a tree frog and an Aracari (a bird, similar to a Toucan).

“We knew there was a strong possibility some geriatric animals would not make it through the storm,” explained Jan Steele, the Zoo’s director of wildlife care and conservation. “Losing animals remains one of the most difficult parts of our lives.”

Watch: Animals munching away as they return to their habitats and temporary homes for the first time since the storm.

Community support has always been strong for Palm Beach Zoo. Neighbors, members, and friends were reaching out to volunteer even before the storm hit.

“We are going to need volunteers to help with cleanup efforts around the Zoo; right now we are still assessing the situation,” explained Ruhl. “We do know that volunteers will need to be at least 18-years-old.”

A Taste of French Fare in the Heart of Northwood Village

Q&A with Brittany Reilly, Founder of Bohemian Groove on the Move