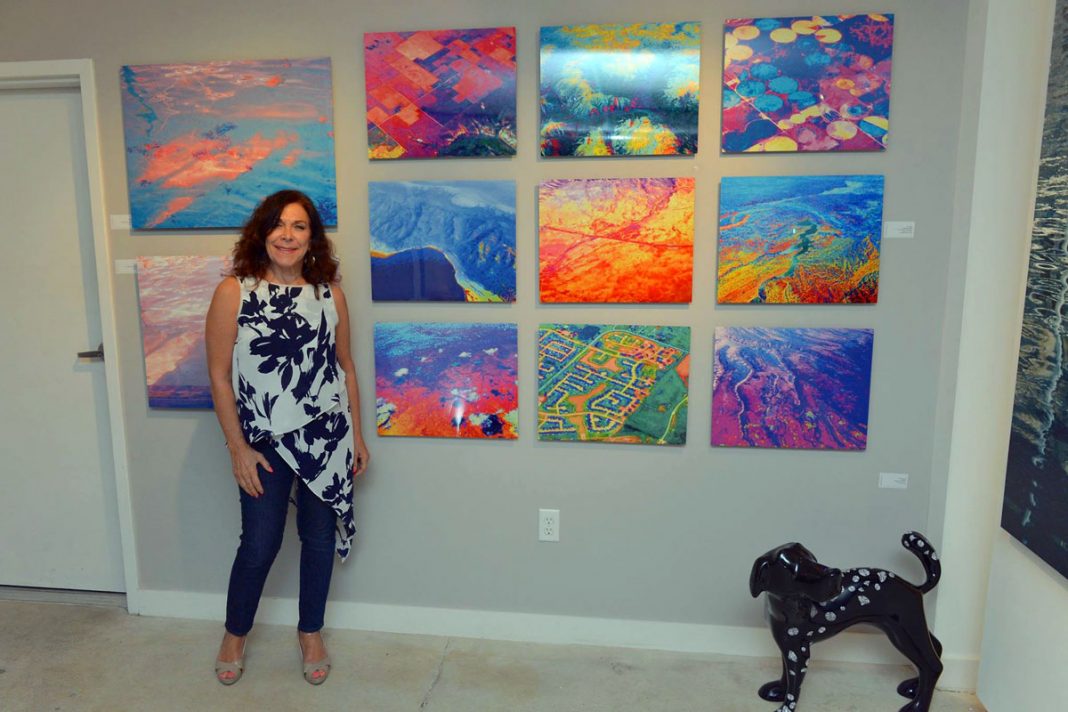 Multi-media artist Ilene Adams sits in her sunny art filled home in Jupiter surrounded by her paintings, photos and dogs, explaining that she initially wanted to be a doctor. “I really love animals but then I watched a cat being dissected and that was it, I changed my direction,” she says laughing.

Good thing she did, although this powerhouse artist, photographer, marketing CEO, wife and mother would have excelled at anything she did. She grew up in New Jersey, took classes at Temple University, studied with the great graphic artist Milton Glaser at School of Visual Arts in NYC, and even has graduate courses in marketing and business from Harvard University under her belt.

“Art school taught great fundamentals but some of the instruction about process was really a waste of time and started me on my own path,” Ilene Adams.

In her first art forays she created some beautiful evocative box collages with vintage wood frames she made herself and photos taken from old family albums. “It’s old school work technically speaking, everything was done by hand including the photo manipulation,” she points out. “I’m surprised I still have fingers after using a bandsaw.”

After school Ilene Adams started her own graphic design firm and did textile design and started working with photography. As her artwork progressed her business took off with her new ad agency that did work for radio stations nationwide and was eventually a $2 million company. The internet changed the business model in the 90s so she moved with her family to Florida.

The light and landscape began influencing her work heavily. She works from her home office studio and her garage now. She states: “I believe that art and beauty bring joy and well being to individuals and are essential for a well-balanced life. I work in both mixed media and photography with influences from Robert Rauschenberg and Maxfield Parish. Rauschenberg’s influence is apparent in my paintings that incorporate paint, collage, photographic images and artifacts. They evoke a feeling of nostalgia or of imaginary places. “

Some of the art Ilene Adams

The paintings incorporate elements of her design work with raised patterns, embedded photos, and even woven scarlet string that has been previously worn on the wrist as a type of talisman, a Jewish folk custom that is a way to ward off misfortune brought about by the evil eye. This tradition is associated with Kabbalah and forms of Judaism. Birds and people float in the dusky washes of color.

As for her photos, Ilene Adams says “My photographs deal mostly with nature, but nature through an intense filter. Images are put under a microscope and colors are heightened. There is beauty all around us but how often do we take the time to really see it? Ordinary images are enhanced to create painterly new images that leave the viewer wondering if they are paintings or photographs? Abstract or realistic?”

A striking new series is of landscape portraits taken from a plane with her iPhone. The topography is familiar yet alien after she manipulates the colors into a hyper realistic world. She took a striking graphic series of work from her car of the cables connecting a bridge against the sky. Other series of water reflections are almost post modern Monet in their dreamy surreal calm.

Bruce Helander, premier artist, critic and former Palm Beach gallery owner who worked with Rauschenberg  wrote, “Ilene Adams, is a professional painter who has continued to sharpen her palette and compositional skills while searching out new subject matter inspired by nature. Her recent series of large-scale photographic prints could be mistaken initially for a sharp focus oil painting on canvas. This wondrous selection of water reflections from surrounding natural growth topped off with floating green circles of blooming water lilies is a unique extension of the artist’s trained eye. In some of the photographs we are confronted by a series of dazzling reflective vertically vibrating lines that cut through the tint of the water like a sharp knife through butter. Adams likes to integrate a bit of art history in her work where it’s useful. She often pays homage to impressionists like Monet connected at the hip with contemporary sensibilities and a flare for vibrant, almost unnatural color. Her painted compositions that are also inspired from the Everglades often center on a single sculptural form of a tropical bird, perhaps standing on one leg surrounded by a robust textural surface of stencil like repeat patterns.”

“What I find interesting about color” she says, “is that you never know if the blue you are seeing is what someone else is seeing. Everyone may be perceiving this differently, but as an artist you have to go with what you feel is true.”

Aside from her artwork, Ilene Adams helps run Art Synergy, the group that will be hosting booths at Art Palm Beach in January and Art Boca Raton in March. The aim is to promote local artists along with the national and international set that exhibits at these high end art fairs that attract big name collectors and offer a great networking opportunity.