Schnabel continues to possess a genuine fearlessness that provides an explorative and perpetual explosive edge to his artwork and remains a notable ongoing recognizable signature of this distinguished American legend.

Every eminent artist seems to have had a defining early career moment that sticks to the ribs forever. These historic and conclusive developments created a “newness” and intentional provocative imagery often combined with inventive novel surfaces, which sometimes generated an opinionated balance of public ambiguity and unreceptive indignation as well as incisive critical acclaim. After the talented young artist Julian Schnabel came on the scene in SoHo and joined the innovative Mary Boone Gallery in the late 1970s, he utilized his skill set with expressionist bluster that created indelible courageous significance, provoking controversy while literally breaking established barriers into pieces with his revolutionary plate paintings that were the talk of the art world.

His recent exhibition at PACE in Palm Beach welcomes back the artist’s unconventional modes of constructing an exotic platform for narrative scenes. Originally conceived decades ago, it employed the engaging and metaphorical aspects of a surface that shattered tradition coupled with a purposeful ungainliness, which Schnabel collectively referred to as a “Bouquet of Mistakes,” a title I borrowed for a review of his memorable survey show at Manhattan’s Mnuchin Gallery in 2004. He deservedly has joined a distinguished stable of artists who bravely explored completely new territory and introduced a new visual language, and with a prankster’s audacity ultimately produced exceptional, illustrious works. Schnabel continues to possess a genuine fearlessness that provides an explorative and perpetual explosive edge to his artwork and remains a notable ongoing recognizable signature of this distinguished American legend.

While it may be difficult now to comprehend the magnitude of the initial momentous controversy of an image of a tomato soup can as a painting (Warhol) or a stuffed goat with a tire as an expressionist sculpture (Rauschenberg), at the time these courageous advances set the art world on fire. These bursts of raw originality provide a certain rare art world revolutionary point of view that simply cannot be forgotten and perpetually brands the artist with a confident iconic reputation that likely will last indefinitely.

Picasso and Braque had their historic moments too by boldly introducing paper onto painted surfaces for a mixed media bonanza that supported collage and cubism, which eventually morphed into an open season on innovation. After this breakthrough event in the 1920s, the perplexing and unfamiliar compositions and other experiments became de rigueur and eventually faded into yesterday’s news, but the pioneering moment was never forgotten with its infectious DNA providing courage and determination for a host of other artists down the road.

The recent Schnabel exhibition at PACE Gallery in Palm Beach titled “Victory” was initiated on the day Donald Trump lost the national election as a celebratory homage to this significant occasion. Ironically, the show opened during the former President’s final Air Force One flight and accompanying motorcade to Mar-a-Lago passing by the same beach where Schnabel coincidentally created plein air painted canvases twenty years ago. Inspired by Montauk’s wild seashore roses and reminiscent of similar flowers spotted by the artist near Van Gogh’s grave, Schnabel seems to have intuitively captured a bright misty instant, a breath of fresh salt air cleverly mixed with an ocean blue background, providing a convincing homage to the inherent natural beauty of our now more optimistic green forecasts for a surviving environment under new leadership.

In this new handsome series, Schnabel, a former dishwasher, by the way, applies aggressive and confident brushstrokes loaded with heavy paint over-embellished cracked plates that will always be associated with his early revolutionary work. His unconventional mode of construction, as well as the found materials he utilized as a de facto canvas, including circus broadsides, sailcloth, and combines of unearthed materials, have served him well over the past thirty years. Schnabel has continued to develop an idiosyncratic divergent visual language, pushing a weathered envelope that remains distinctive in contemporary picture-making. 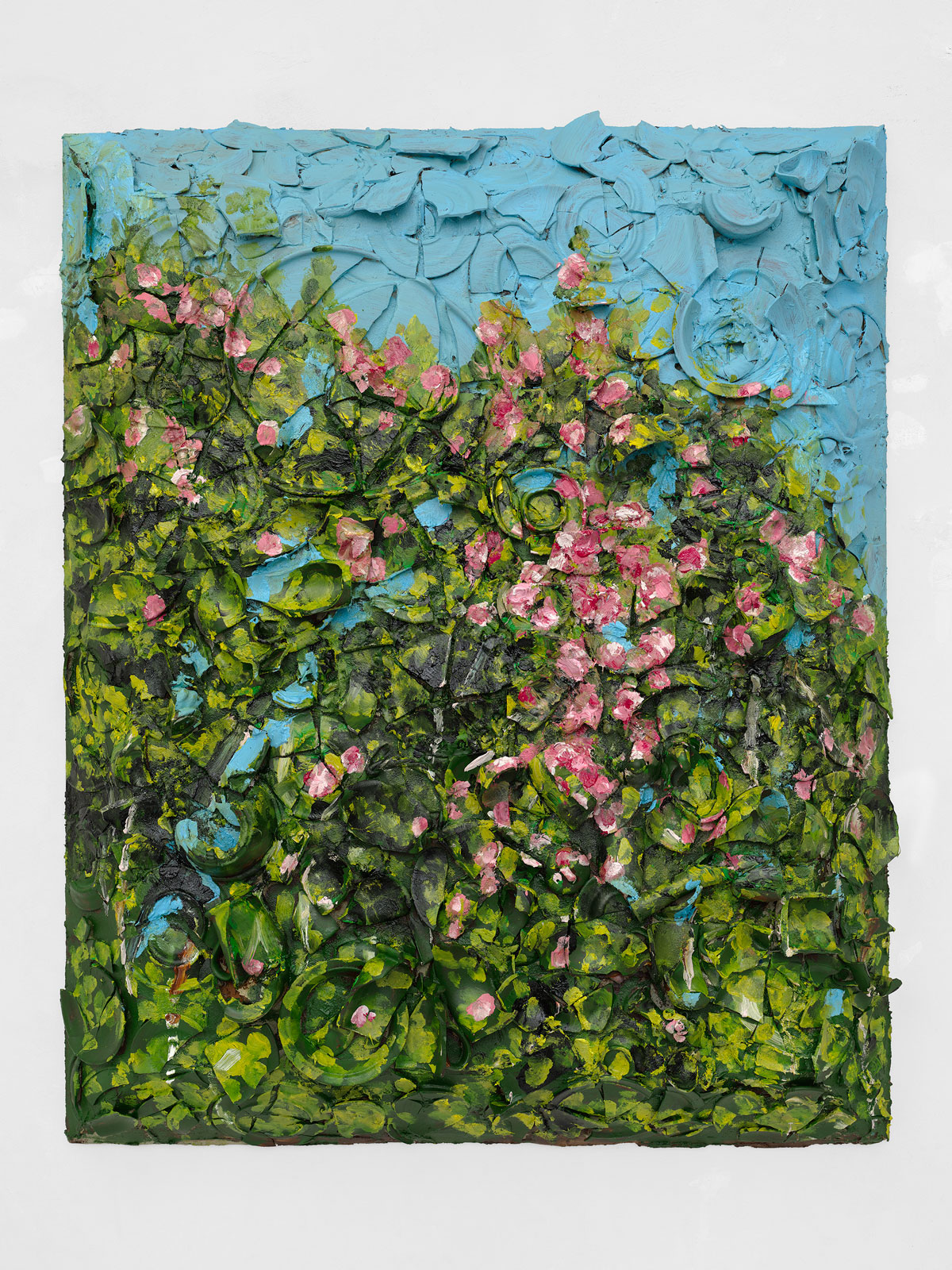 At first glance, the new works on view feel comfortable in the context of familiarity, like meeting an old friend, but also engaging in their inherent unconventional surfaces that still retain an undeniable effervescence. The works on view were positioned on a raised trapezoid-like basis on canvas that became a three-dimensional stage for an uncommon balanced performance in mixed media harmony.

The paintings on display, all vertical and of the same organic subject, are dimensional arrangements that support the simplicity and inherent abstract majesty of nature by a renowned artist re-interpreting flowering blooms along Montauk’s coastline. The configurations are handsomely vibrant, and the particles of crockery often accentuate the sharp viridian-hued edges of the wild beach roses that seem to literally burst from their base. This impressive exhibition commemorates an invention embossed with a dependable formula that keeps Schnabel firmly in the driver’s seat. Confident, observant, experienced, and aggressive, the artist obviously has stayed on a fast track. This latest series, which had its beginnings as white china, has been embellished with Rouge de Cadmium and the distinct color became a perfect (if not patriotic?) partner for a Blue Plate Special.

Bruce Helander is an artist who writes on art. He is the former Provost and Vice President of Academic Affairs for the Rhode Island School of Design, a former White House Fellow of the National Endowment for the Arts, and a member of the Florida Artists Hall of Fame. He also is a contributor to The New Yorker magazine. His most recent book is “Chihuly: An Artist Collects” (Abrams, Inc.).

158
SHARES
ShareTweetJoin Our Newsletter
Around the CityThe Arts

Lonnie O’Neill
Bodega's concept will offer an environment that brings the fabric of the community together over food and drinks.