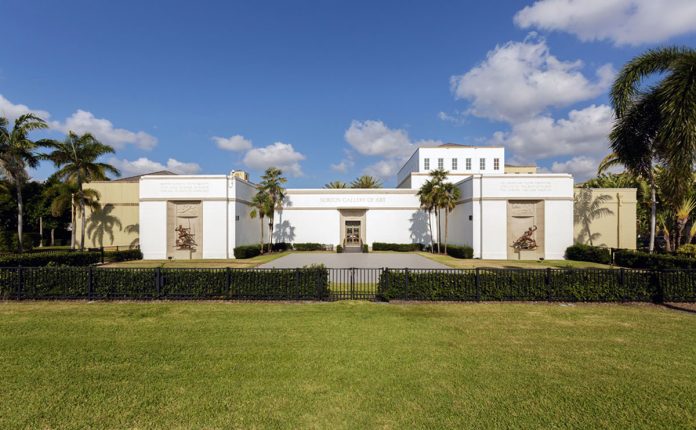 New video art installation by Mark Fox and collection masterpieces will be on view. Art After Dark resumes July 7 with music by the Fiesta Bobs.

The Norton Museum of Art has reopened and now with free admission for all. The Norton is also kicking off its summer season with a new video art installation, collection highlights, the return of its popular weekly Art After Dark programs, including a series of one-act play readings by FAU’s Theatre Lab, architecture activities based on The New Norton construction project, and the launch of an art-themed book club.

On view this summer at the Norton will be a large-scale video installation by American artist Mark Fox that offers a new perspective on Monet’s iconic lily ponds in Giverny, France. Giverny: Journal of an Unseen Garden (2010-2015) features underwater views that record the shifting light and seasonal changes in Monet’s garden ponds.

The Norton’s popular Thursday evening series Art After Dark resumed on July 7 with an American- themed program featuring the Fiesta Bobs, who will bring their guitar-and-fiddle music to the Norton for the first time, paired with American-made, micro-brewed craft beers, sliders, fresh-made fries and corndogs catered by Potions in Motion. On July 14, Art After Dark presents its annual Bastille Day celebration, featuring an encore performance by the French Horn Collective, as well as en plein air painting demonstrations, French food, wine, language classes, and more!

Architecture and design activities in conjunction with The New Norton expansion – for which construction is underway and completion is scheduled for late 2018 – are also planned for the summer. They include Our-Kid-Tecture, a four-session Saturday course in July that outlines the building process, from sketching to three-dimensional modeling, and a screening of the film, How Much Does Your Building Weigh, Mr. Foster?, on July 28, with a post-screening discussion led by Norton Deputy Director James B. Hall.

In partnership with the Palm Beach County Library System, a new type of book club – Book + Art: A Mashup for Art and Book Lovers – starts on July 30 with a discovery of artist Camille Pissarro through Alice Hoffman’s book, The Marriage of Opposites.
For a full schedule and more details on summer programs, visit www.norton.org.

During construction of the New Norton from July 5 through the late 2018 opening, the Museum will be open to the public from noon to 5 p.m. Tuesdays, Wednesdays, Fridays, Saturdays, and Sundays, and from noon to 9 p.m. on Thursdays for Art After Dark. It will remain closed on Mondays and major holidays. During construction the café will be closed, but limited food service –beverages and light bites–will be available on Thursdays during Art After Dark. Family Studio will continue before Saturday opening hours with How to be an Explorer of the World (July) and Artistic Challenges (August) art workshops following a gallery tour.

Admission is free to all through the opening of the New Norton in late 2018. In addition, Norton members will receive benefits that include special offers at a number of food and retail locations along the Dixie Highway corridor, and free admission to more than 250 museums throughout North America.