The final designs for the new Norton transformation project have been revealed. Planning, design, and enabling construction for the transformation of the Norton Museum of Art in West Palm Beach has been rapidly progressing since the announcement of the New Norton project two years ago.

Enormous renovation plans are being set in motion at the Norton Museum of Art and some preliminary construction is already paving the way to the major work which will begin next summer.

Watch the New Norton transformation as explained by Lord Foster…

There has been construction work around Norton’s big, beautiful landmark —a 75-year-old Banyan tree on the Museum’s west side— as a way to protect it from the coming construction. The fabulous fauna figures prominently in the design for the new entrance to the museum, with a large metal canopy shade overhanging around the tree. It will have special lighting at night and hedges along the sidewalk to further frame the tree.

As of now, the parking lot of the museum is across the street on Dixie Highway, a less than ideal situation with traffic and the main entrance located way down the south side. The entrance in the new Norton Transformation Project will be much more inviting, with less traffic, a shady canopy and a reflecting pool. 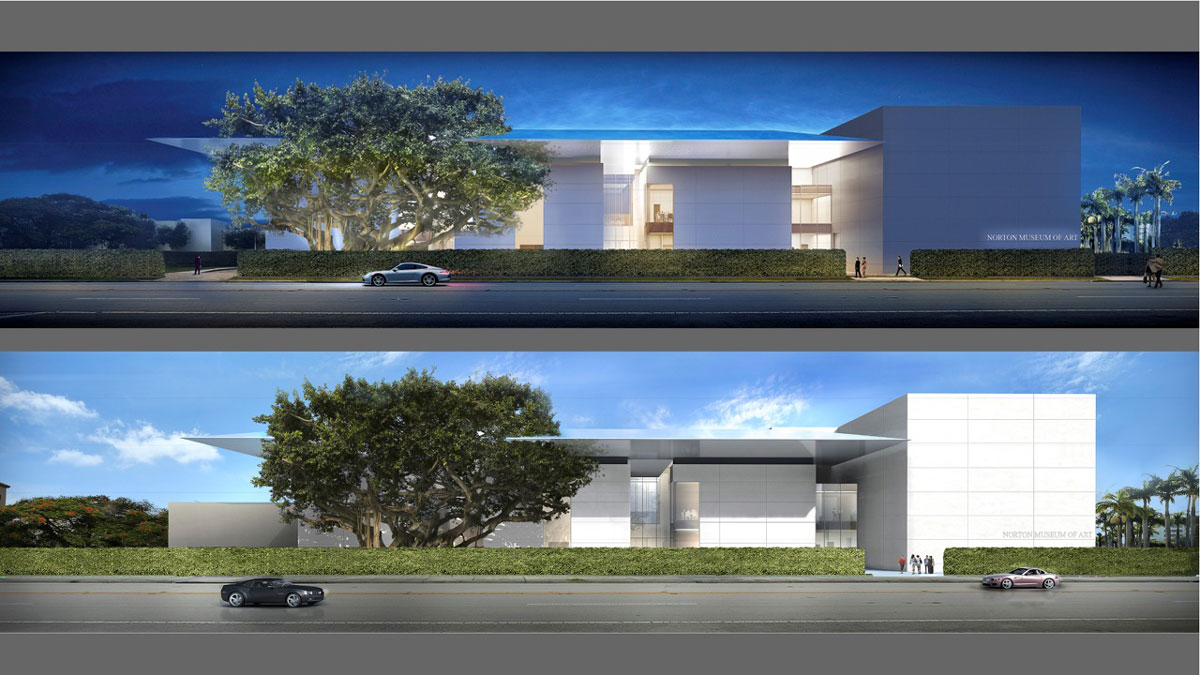 There are plans for South Dixie Highway that involve turning it into a much narrower road, with expanded, wider sidewalks and more open plaza spaces. This plan is in sync with what Norton officials have in mind for the museum’s main entrance renovations.

The transformation of the Norton Museum of Art will extend the landmark Dixie Drive pavilions. The masterplan also involves the addition of new public amenities within a garden setting. The project also includes two new galleries with modern environmental systems, a sculpture gallery and a new Education Center.

The Education Center alone will be gaining triple the amount of space it has now. The long-term masterplan will add two new wings to the galleries to the east of the museum and also includes a new entrance, lofted by three new double-height pavilions joined with the re-worked existing wing by a shared palette of white stone, while a metal roof canopy floats above the pavilions.

The new pavilions will house a modern 200-seat auditorium, event space in addition to a Grand Hall, a new museum shop and a new restaurant with al-fresco garden seating. Right now the café is indoors back behind the atrium.

All in all the Norton transformation project contains a 50,000-square-foot addition of program space, meeting rooms, a new entrance space with 44-foot high ceilings, and another 15,000 square feet for galleries and supporting operations. The museum would also renovate 60,000 square feet of existing space.

It’s a huge undertaking and is all expected to be completed by 2018. The plan was designed by architecture firm Foster + Partners.

Another part of the plan includes renovating some nearby houses, to integrate them into the museum campus as the museum sits in the middle of some of the most intact historic districts in the city. The six structures in the adjacent Mango Promenade Historic District date to the 1920s.

The Norton Museum of Art, a world-class art museum, was founded by Chicago’s industrialist Ralph Norton who gifted over 100 works of art and displays permanent collections including the work of Claude Monet, Pablo Picasso and Georges Braque. The last expansion of the Norton Museum of Art was back in 2003 when the museum spent $20 million to add a 45,000-square-foot, three-story wing. Now new Norton transformation project will be an opportunity to keep on nabbing more major touring shows.

This is a new update of our story first published on September 23rd, 2016 under the title: “Big Changes Hang in the Air for the Norton”

Sandra Schulman
Pura Vida Miami is laid back, like a coffeehouse but more, with lots of open indoor and outdoor seating.

Sandra Schulman
In 2015 the 18-year old Avery was a budding model, an ambitious millennial.

Maritza Cosano
A community of forward thinkers taking the right steps to bring all kinds of creatives into the picture.
ADVERTISEMENT
ShareTweetJoin Our Newsletter
© 2015-2021 WPB Magazine