The rock band Nuclear Valdez was a pioneering group that rocketed Miami into the national spotlight in 1989 when they released their debut album on Epic records. Brought together in 1985 by singer/guitarist Froilan Sossa (aka Fro Sosa), bassist Juan Diaz, lead guitarist Jorge Barcala and drummer Robert Slade LeMont, the Cuban American group took their stylistic cure from both their Latin roots and the American rock and roll they grew up listening to. Their explosive moniker had nothing to do with the Exxon oil tanker disaster, but was simply a joking nickname for a former coworker of Diaz’s with a hot temper.

The band signed with Epic Records at the end of the ’80s and released their debut I Am I in July 1989. With chiming guitar work and a uniquely versatile vocalist in Sosa, the band was a smash, appearing on an early episode of MTV Unplugged with lead single “Summer,” a soaring commentary on the Cuban revolution of 1959. The “Nukes” opened for big music names Living Colour, Jane’s Addiction, The Smithereens, Ronnie Wood, Bo Diddley, and  Hoodoo Gurus, among others. The band marked a rare moment in Miami’s modern music history, days of creativity and fusion the likes of which have not been seen since. Their music spoke of a generation and a cultural exchange that emerged from the streets of Miami before it was on the national radar.

Their follow-up, 1991’s Dream Another Dream, was more mature in theme and structure and was more heavily Latin rock influenced. They missed the arrival of MTV Latino a few years later – which would have made them a far greater success. America wasn’t quite ready for their hybrid multi-cultural sound as grunge and heavy rock was the head banging sound of the time. So after the second album the band took a hiatus. But they had been recording demos all along, and recently Sosa had begun going through his collection of 50 DAT tapes (remember them?) to transfer them digitally.

“It was pure coincidence this new release happened,” Sosa said at the bands secret warehouse rehearsal space in Miami, surrounded by two other members of the group and their longtime manager and great music world character John Tovar who helped bring The Mavericks and Marilyn Manson to fame in the 1990s.

“Yeah I had been asking them every few months for years about these great demos that never made it to record or were even performed live back then,” Tovar says. “Then I was talking to a label back in December who offered to put some of the songs out on vinyl for Record Store Day 2017, which just happened on April 22. I called Fro and said hey man let me tell you something this is a great idea and needs to happen fast!”

Sosa and the band agreed so the race was on to find the right songs to fit the release. So what was the main idea?
“These songs are over 20 years old that we recorded at Criteria Studios (Miami’s famous studio where everyone from Eric Clapton to the Bee Gees to the Eagles recorded) but we wanted to pick the group of songs that best represented where we were and what we were sounding like back then,” says Sosa.  “We always  recorded live to tape, and wanted to pick songs that were as good as what we released on Epic. We always wrote as a band, someone would get an idea and we would all work to develop it. We’re also a heavy guitar oriented band so that was a factor too.”

“That’s why there are no individual writing credits on the record,” Tovar adds. “It’s a group thing. Always.”

Another limitation was the fact that vinyl can only hold so much music, so eight songs was the limit – four per side to clock in at 45 minutes. The result is Present From The Past (Sinical Records), a title that holds multiple meanings. The cover is a collage of many photos of the band performing and past band publicity images. The black and white plays into the retro theme.

Since 2007, Record Store Day, has celebrated the unique culture that permeates independent record stores across the country, with bands releasing vinyl and other classic types of memorabilia. Supported by music stars, over 1,400-indie record stores in the U.S., and thousands more globally, participate in Record Store Day. Recognizing its importance, Nuclear Valdez sent a letter directly to the participating record stores:

We are Nuclear Valdez, the 1989-1992 band with 2 albums on Epic Records, both critically acclaimed. Heavily featured on MTV as well as guests on an early episode of MTV Unplugged (when it was a show hosted by Jules Shear), we toured Internationally and earned the support of a solid fan base.

Here we are in 2017 and after many years of requests from our fans, we scoured our archives and put together a vinyl only release (no digital or CD) called “Present From The Past” (think about that for a second…)

These are all songs in demo form that never made it on to the two albums we released, but we feel are as good as anything we released at the time. Working with Sinical Records, a label created in partnership with our manager, John Tovar (who launched the careers of Marilyn Manson, The Mavericks, among others), made it possible for our album to be accepted as an official Record Store Day release, as featured on the fantastic 10th anniversary roster of titles. 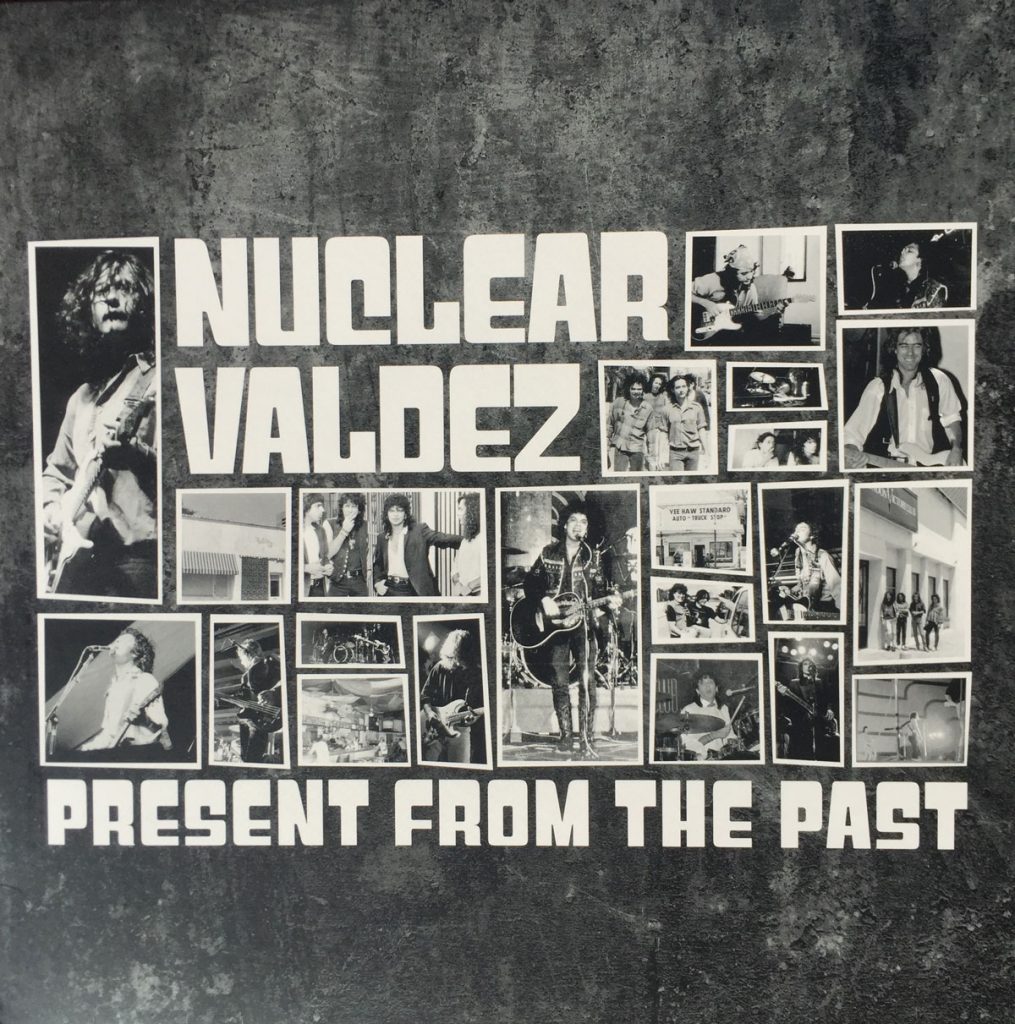 The band is planning a delayed release concert in July.

“Our bass player is overseas now so we wanted to wait for him to get back to the states and do this right. We’ve only played a handful of shows in Miami over the years so we’re excited to do this with the new release,” Sosa says.

At the rehearsal the band locks into immediate grooves, speaking in a musical shorthand achieved after working together for decades. Sosa’s voice has never been better, a multi-octave emotive locomotive, powering the songs with a fierce energy propelled by drummer LeMont’s powerful backbeat. Intricate guitar work by Barcala weaves a spell. The band plans the all important set list, emphasizing the new old songs and encoring with their hits and some reworked fan favorites.

The Miami music scene has changed enormously since the Nukes broke onto the scene, but with a resurgence in popularity of other Miami bred bands  The Mavericks and Saigon Kick, the time may be right for the Nukes to detonate once again as the past is never really past.