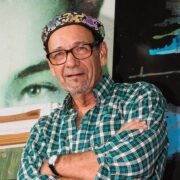 In early 2020, Covid concerns restricted travel and interrupted the entire art world from art galleries and museum retrospectives to artists’ studios. Years of planning for exhibitions at both large institutions and small-scale showplaces were put on indefinite hold. Today, the art world is recovering slowly from this devastating trail of canceled exhibitions, art fairs, and basic isolation. South Florida is no exception, even with some guarantees of warm weather and outdoor dining. After two canceled editions, Art Basel Miami Beach finally was able to produce a powerful assemblage of distinguished galleries from around the globe, and fairs such as the mighty Art Miami, Context, and a host of other smaller satellite art fairs that had the capability to travel outside of their home base and set up temporary shop in Greater Miami. Those artists who have lived by the motto “Live where you work and work where you live” were able to continue engaging in creative pursuits regardless of the risky environment outside.

Sandra Muss is an energetic South Florida artist who is not one to hang up her hat even temporarily, no matter the obstacles. Her summer studio is housed in a converted lumber mill. Here, she spent most of her creative time during the pandemic working on projects without the complications of traveling back and forth and a normally demanding exhibition schedule. But isolation and concentration come hand in hand for artists as an inherent consequence of their craft. Muss’ career has continued to rise in leaps and bounds since her critically acclaimed solo exhibition at the Coral Springs Museum of Art titled “An Assemblage of Spirits,” and new opportunities are presenting themselves as diligent hard work has paid off clearly.

The artist has achieved an innovative and memorable style that has its roots in assemblage and collage, particularly, early pioneers such as Kurt Schwitters, Joseph Cornell, and Man Ray as well as contemporary artists Louise Nevelson and Robert Rauschenberg. Muss has a special knack for combining found industrial materials often made of rusted metal, such as discarded doors and a twisted iron bed. She also intuitively combines organic objects such as dried flowers, shells, feathers, and animal skins, which she seems to effortlessly arrange into a perfect “marriage” composition of opposites. Her structural inspiration often seems to derive from early abstract expressionists such as Willem de Kooning and Franz Kline, where mark-making became instinctive in an abstract context. Her memorable exhibition at The Kreeger Museum Sculpture Garden in Washington, D.C. presented outdoor works titled “Portals,” a clever reinterpretation of exploring the relationship between art and the organic world. The installation utilized the museum’s five acres of land and Muss installed seven stainless steel and mirrored columns, each ten feet high and wrapped in wire. This offered a contemplative environment for the public to engage with art and nature. As the seasons changed, so did the individual sculptures which encouraged repeat visitors to meander through the grounds and interact with the tall cylinder shapes relative to the surrounding trees. The incorporated vertical mirrors reflected not only the surrounding forest environment but an image of the viewer as well.

The artist also displayed sculptural works in Villa San Michele in Florence, Italy, which is a handsome and picturesque rural environment that celebrates the old and the new. In this series, titled “Portals: Dream of Flight,” Muss emphasizes the ambulatory spirit and perhaps takes a cue from Leonardo da Vinci, who worked in the same vicinity. Here she welded together massive Corten steel tree trunk-like shapes that had the outline of a cicada’s wings as if prepared for take-off. The forms and mirrored glass twist to form the cicada wings accompanied by a discreet musical track comprised of slowed down cicada-chirping to form a kind of angelic chorus that surrounds the observer and permeates the entire sculpture grounds. Inside the villa surrounding the doors both inside and outside are several sheets of multi-colored materials in the shape of wings creating rainbow colors and portals.

Da Vinci’s memorable quote, “There shall be wings!” is certainly appropriate here.

Speaking of winging it, Sandra Muss has embraced one distinct universal quality of successful, respected artists and that is the notion of reassembling painted sections from a larger picture plane into reduced versions, cut and re-stretched into smaller works. There is a colorful history of artists who repurposed existing works by slicing and dicing the canvas, or, in some cases, completely repainting the original. This process, called “pentimento,” was employed by artists like John Singer Sargent, Vermeer, Rembrandt, da Vinci, and even Picasso, early in their careers when a canvas was sometimes unaffordable. Or in some instances, as Francis Bacon famously did. The artist would literally cut up his paintings with a vengeance while looking for fragments that he liked and then destroying whatever was left. Muss has concentrated on giving her works a new life by manipulating her finished canvases into fragmented squares that serendipitously become mini arrangements in their own right. Reducing an abstract painting into a series of cut square forms and then re-stretching them is a distinct challenge for any artist. Muss seems to have mastered this method as evidenced in her latest series. While it may be one thing to develop a painting from scratch and then fill up the space, it is a completely different challenge to reduce a large composition into separate squares and create smaller ones just by applying artistic creativity. Often photographers go back to the darkroom to explore details that can serve as different arrangements.

Looking back over the last twenty years of creative energy and exhibitions it becomes quite evident that Muss’ talent for putting together assemblage gets its true natural spirit from found objects, that like her small pictures, are trimmed and shaped to her liking. In her latest series of painted squares, there are references to legendary color field painters like Morris Louis, Mark Rothko, Helen Frankenthaler, Jules Olitski, Robert Motherwell, Jill Nathanson, Anne Truitt, and Emily Mason. There are also strong references to abstract expressionists like de Kooning, Kline, and Jackso Pollock.

Sandra Muss’ painted surfaces are literally soaked with a variety of textured visual passages and delightful scribbles with meandering lines she has been experimenting with for over two decades. And now, after a two-year hiatus exhibiting her work while discovering yet another creative direction, she has secured a position that is personally identifiable. Sandra Muss spent her time in creative isolation and contemplation and developed an idiosyncratic recognizable style that is completely her own.

Bruce Helander is an artist who writes about art. He is a frequent contributor to The Huffington Post, as well as collage illustrations for The New Yorker. He is a member of the Florida Artists Hall of Fame and is a former White House Fellow of the National Endowment for the Arts.