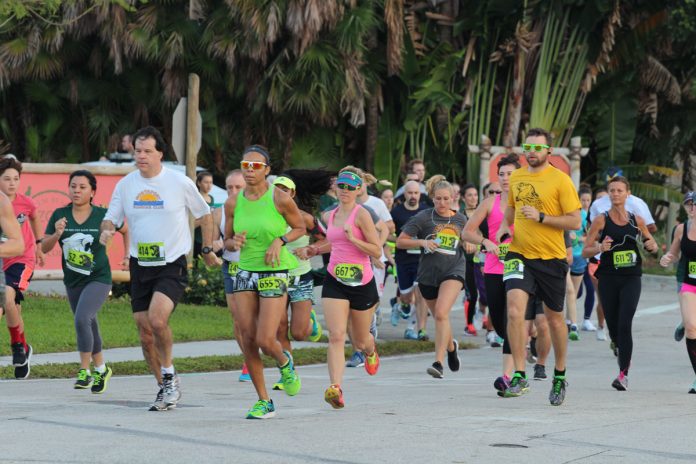 The first Saturday of this year (2017), a cheerful and full of energy crowd gathered together very early at the Palm Beach for the Save the Panther 5K Race, the first of the Big Cat Race Series happening each year.

The Palm Beach Zoo organizes three races throughout the year with the purpose of raising funds to ensure permanent protection for prime panther habitats and for educating programs for the public to learn about the plight of Florida panthers.

Net proceeds from the Save the Panther 5K Race in January run help support the Zoo’s partnership with Florida Wildlife Corridor as they work to protect panthers and their habitat. In turn, net proceeds from May’s run support their partnership with Wildlife Conservation Society (WCS) and their work at Endau Rompin National Park in Malaysia. Current estimates have the Malayan tiger population around 300 in the wild.

Why is the Save the Panther 5K Race important?

There’s an estimated of 150 (or fewer) Florida panthers, our state animal, left in the wild. These large, tan cats are found in southern Florida in swamplands such as Everglades National Park and Big Cypress National Preserve.

Because this species is so critically endangered, it is vulnerable to just about every major threat – from habitat loss to cars and even feline diseases. Right here in our own city, the Palm Beach Zoo & Conservation Society is doing a lot to save the Florida panther. Working along with conservationists are working hard to study the cats and hopefully make the population healthy and viable.

The races have also helped educate the public and drive interest towards these endangered big cats. It’s important to keep “teaching race participants about actions they can take to help wild panthers, we hope to fulfill our mission of inspiring people to act on behalf of wildlife and the natural world”, says Ron Brooks, Events Manager for the Zoo.

Now that all 3 yearly runs are established, the Zoo offers “Big Cat Race Series” registration prior to the January run. The series package saves the runner some money over individual registration and provides a special series T-shirt and award for those runners.

All 5k runs use portions of the roadways and paths of Dreher Park and finish inside the Zoo. They pass by the Zoo’s Malayan tiger habitats, koala, fennec fox, siamang, and more on the way to the central fountain plaza for the finish line. Isn’t it marvelous experience?

If you want to participate:
Find detailed information about Big Cat Race Series 2017 & Save The Panther 5k here.

Icons of Rock and Roll and the Kennedy’s Star on Clematis...

American Craft Aleworks: Brew with a View on Clematis St.