A culinary tour is your chance to sample a city’s most culture-packed, historically rich region. For a few hours, you can stop the clock’s hands to wander the streets you probably often pass, and find out about the stories behind those charming historic houses, blossoming gardens, art sculptures, small shops, restaurants, and meandering canals in a storybook setting.

The Taste History Culinary Tour is a non-profit cultural tour program blending food, local art and Florida’s multicultural history. They offer many tours, and as you travel through Delray Beach and Boynton Beach, you get to explore Florida’s natural beauty of the year-round sunshine and pristine beaches. Have more time? Book your next tour, then push on to West Palm Beach to relive the 1920s’ golden era, now retro 2017.

This culinary adventure gives you not only a real taste of these local regions in the east coast of Florida. You get to eat, drink, and immerse yourself in history and culture as you explore these exciting cities, as told by Lori Durante, Guest Relations Manager of Taste History Culinary Tours, who’s an expert South Florida tour guide. Her well organized, four-hour “field trip” takes two steps forward and one step back into Delray Beach and Boynton Beach’s past. 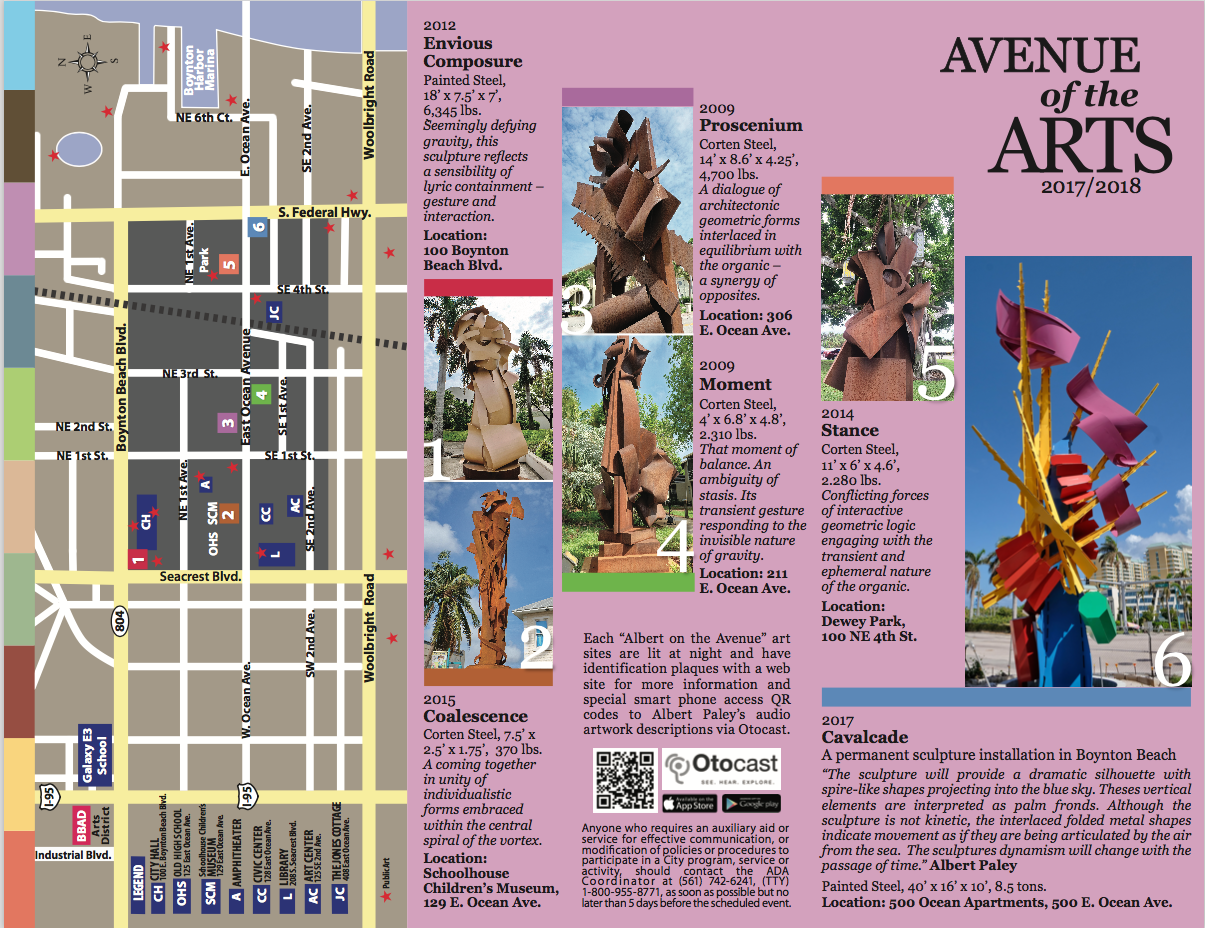 Durante shares anecdotes about neighborhoods, residents and iconic buildings, including tours about the bohemian and artsy downtown Delray Beach best known as a beach town with plenty of style, happenings, and places to find serenity. Durante leads most of the tours herself, which she enlivens with insights culled from her years of scouting the South Florida area, specifically Palm Beach County.

Boynton Beach and Delray Beach are the perfect walking towns. The streets are easy to navigate, due to its great numbering system, which was introduced in the 1950s as requested by the Post Office to help with mail delivery.

Now, journey with us from Boynton’s busy streets to Delray Beach’s iconic downtown, as we make our way along the east coastline of Florida and highlight some of the tour’s best stops and history lessons…

“Downtown Boynton Beach is going through a revitalization,” Durante says as she sits behind the bus driver and directs her to our first stop. “The downtown became a distressed area, until nine years ago, when the city turned to the arts and designated the Avenue of the Arts. Directly east of us is the Ocean Avenue bridge over the intracoastal waterway, which is formally known as the Florida East Coastal Canal.”

The Florida East Coast Canal is one of the many canals that Henry Flagler created to help construct the Florida East Coast Railway. And directly east of that bridge, at the foot of it, was the location of Mayor Nathan Boynton’s house, who completed a round in 1897. According to Durante, the building no longer stands, but it was the land marked for this area.

While we learn that mail was delivered by foot from Jupiter to Miami in the late 1800’s, we breeze through the bus’ doors and continue our tour on foot.

Boynton Beach has a diverse culinary scene brimming with global flavors, and several great, fun bars where you can enjoy cool drinks. Voted one of the top ten best raw bars in Boynton Beach is Hurricane Alley Raw Bar & Restaurant. It has a cool vive, eclectic bar and fresh seafood, delivered by their own Sea Mist III ship, out of Boynton Marina. Our tour, a wonderful group of lady friends determined to learn more about their own town’s history and backstreets, try several of Hurricane Alley’s most popular small plates. My favorite dishes are the “Tropical Wave,” a seared thinly sliced tuna with sesame seeds, and the “South Florida Roll,” a mix of lobster with a spicy mayo, avocados and cucumbers, with white rice on the outside.

We exit Hurricane Alley Raw Bar & Restaurant and walk over to the next street, where we discover beautiful art displayed in a nearby park, which is a pivotal corner for Boynton Beach’s Avenue of the Arts.

Avenue of the Arts started in 2009, and they’ve had rotating art exhibitions, which is kind of fun because every year they get something new, up to twelve sculptures throughout the city. It starts at the corner of Boynton Beach Boulevard and runs through Seacrest Boulevard by Boynton Beach’s City Hall. The junction of Boynton Beach Boulevard and Seacrest Boulevard is one of the most important intersections in the city as it provides access from Interstate 95 to the downtown area, and to the many cultural, religious, and municipal buildings there.

The whole purpose for the exhibit is to bring people to this area, like ourselves. It’s a very exciting time for the city of Boynton Beach as it is evident that a lot is happening. From Seacrest to a bit more south, where the library is, and one block east of that, there’s a whole new area that’s under development, like an old high school that’s being renovated into a cultural center. The art is attracting people to the area, and developers know that.

500 Ocean, a huge real estate enclave has committed to the City of Boynton Beach’s Art in Public Places Program by displaying a massive Albert Paley outdoor national sculpture exhibition titled, Albert on the Avenue. The outdoor exhibition is presented by the program, under the direction of Debby Coles-Dobay, public arts manager.

The colorful iconic sculpture, titled “Cavalcade,” meaning motorcade or parade, reaches 40-feet into the sky, making it the tallest public art in the Palm Beaches. Albert Paley is one of the world’s most prominent metal sculptors. His descriptive commentary of each sculpture can be accessed via a smart phone connecting with QR-code on each of the plaques on every single sculpture piece. The Paley Sculptures are on loan for the yearlong exhibit ending on September 30, 2018, and are also available for purchase.

Amanda James Gallery is the quintessential artist’s shop. This husband and wife, originally from Baltimore, Maryland, is a local artist team that has discovered the perfect location to display a wide variety of photographs [by James] and paintings [by Amanda]. Amanda’s hand painted pottery, textile design and her exclusive clothing design line has a Boho style that’s both chic and artistic. “My studio is in Delray Beach but this is where we set up shop,” says Amanda.

She and her husband James both fell in love with this little street and immediately felt strongly that something big was going to happen here. Most of what you see in her store she creates in her studio in Delray Beach. James’ photography is non figurative, as he prefers not to have humans in his pictures!

Amanda and James have made their mark in Palm Beach, having designed store windows over the past summer. Their work was so exceptional that they have been invited to come back during season. “I think she’s extremely talented,” I hear one of the ladies in the tour tell another as we leave Amanda James Gallery. “Everything she did, you can see the originality and style.”

The cottage/bungalow architecture gained in popularity in the 1930s in the Great Depression, when people were experiencing financial restrains. So homes became smaller, following the bust of the land explosion of the 1920s.

Three words to describe this restaurant: finger-licking-delicious. Troy Davis opened in 1996 and his menu contained mostly seafood and some barbecue dishes, but his customers kept ordering barbecue.

Today, after many years at the pit, Troy [The Pit Boss] has made barbecue more than a business, but a legacy that’s he’s passed on to his sons. Troy’s signature sauce is ‘perfection,’ just like the rest of his food. As you take a bite, the meat just falls off the bone, but there’s no mystery there, as his formula is simple: “First, get the fire just right. You don’t want a flame — no flames, just smoke,” he says.

Durante explains how in the 1800s, as Africans and Bahamians migrated to southern Florida, their foods began to influence the area and became part of our culinary landscape. The Caribbean foods, such as conch fritters which means [to fry] were a hit, and still are to this day! “All the recipes we cook my dad taught me how to do them, because we’re not allowed to deviate from them,” says Trevor Davis with a big smile. He went to culinary school and since then has been following his dad’s footsteps. Not a bad idea, as the contents of the menu is wonderful.

As we hop back on the bus, we continue on this amazing appetizing adventure, now en route to Delray Beach, whose downtown is also going through a revival.

In Argentina, Paraguay, Uruguay and in Spain’s south region, specifically in the province of Valencia, there’s a word that is commonly used as a friendly greeting. Che! means friend, pal, mate, bro, or hey dude! And so, there’s a good reason why this restaurant has chosen that name. Che!!! evokes the friendly ambiance and the exemplary Spanish food that’s served.

As most Spanish chef’s tables, seafood is king. Daniela Sujoy, General Manager of Che!!! made us ladies feel like queens, letting us savor some of her family’s restaurant’s most delicious tapas [small plates]—some Argentinian, others more Spanish like the ceviche and Argentinian empanadas, and others, which are a fusion of the two.

The Sujoy Family has Che!!! restaurants all over Spain, with locations in Madrid, Barcelona and other places, but their Delray Beach restaurant is their first U.S. location, which has been opened now for fourteen months. Everything you taste is homemade—fresh and positively delicious.

The Taste History Culinary Tours makes its way back to Boynton Beach under a heavy downpour, derailing us a bit from Durante’s original plan to show us the Boynton Beach Industrial Arts District. Still, we get a perfect picture of the incredible work that’s taking place here.

The tour ends on a good word: dessert at Palermo’s Bakery. “It was a lot of food!” I hear one of the ladies talk about the tour, but nobody says no to dessert, especially from an authentic Italian bakery. We get to taste an assortment of cookies, and I get to take home a slice of Italian cake. Italian cakes are no different from those I tried in Madrid, Spain. Sinfully good.

If  you’re a foodie who loves history and wants to discover some of Florida’s beautiful east coastal towns, then Taste History Culinary Tours is the right one for you. Many tourists around the world come here exploring the heavenly taste of Caribbean, Spanish, and European foods that is an epitome of our State’s food legacy. And leave saying…

For questions about taking this food tour, visit tastehistoryculinarytours.org for information on dates and pricing.

Sip and Savor Delray and Boynton Beach with Taste History Culinary Tour to discover and explore cities’ most culture-packed and culinary traditions.