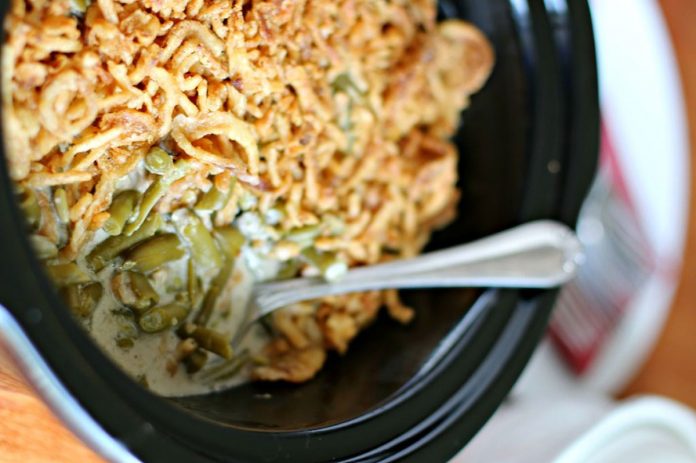 Check how to make a delicious Green Bean Casserole which is a popular Thanksgiving side dish in the entire country. - By Sarah Olson

Now that the Holiday Season is kicking off, homemade delicacies like this Slow Cooker Green Bean Casserole make their way to our dining tables more frequently. The Green Bean Casserole is a dish consisting of green beans, cream of mushroom soup, and french fried onions is a popular Thanksgiving side dish in the entire country.

My family can not go without the Green Bean Casserole. It’s pretty much the best side dish for Thanksgiving or Christmas (well, besides the mashed potatoes). I decided that I had to create the perfect Slow Cooker Green Bean Casserole myself, since most recipes I found online either had frozen green beans or jarred alfredo sauce (yuck!).

This recipe for Slow Cooker Green Bean Casserole makes a ton, when I made this for thanksgiving, it fed about 15, with lots of leftovers. So, I would think this recipe could serve up to 20 people.

At the end of the slow cooking time, I chose to brown the french fried onions on top of the casserole in the oven, it wasn’t a big deal, for the turkey had already been removed from the oven, and all that was left in the oven was the rolls.

Instructions:
1- In a very large bowl, add the cream of mushrooms soup, milk, black pepper, and onion powder, whisk until smooth.
2- Add the drained green beans, and 1 of the canisters of french fried onions into the large bowl with the soup mixture you just made, and with a spatula, fold everything together, being careful not to break the green beans up.
3- Spray the slow cooker with the non-stick cooking spray, and add the green bean mixture to the slow cooker.
4- Cook on HIGH for 2.5 hours.

After cooking time is done, add the other canister of french fried onions onto the green beans. Take the slow cooker insert out of the heating element, and put into the oven (without the lid on!). My oven was set at 350 degrees. Cook for about 10 minutes, or until the onions are browned.

Sandra Schulman
A unique place in West Palm Beach where you can suit up and smash stuff – your stuff or theirs.

Clematis by Light: a waterworks spectacle in Downtown