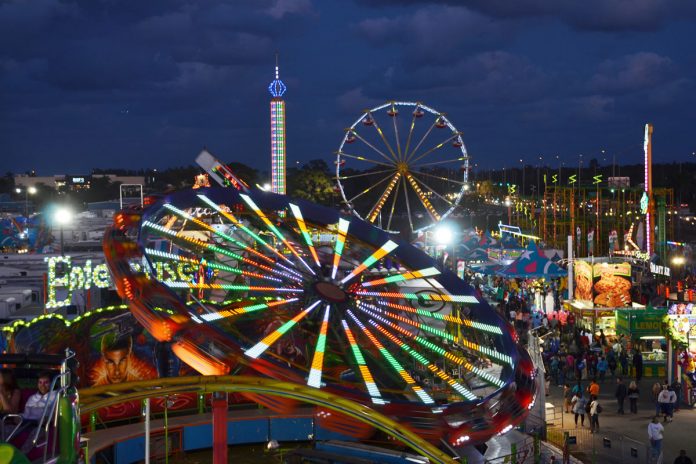 The South Florida fair is planning to bring its own version of Mardi Gras to life — complete with elaborate floats and daily parades, colorful beads and Louisiana-style entertainment and food — as it carries out a New Orleans theme for the 2017 fair, Jan. 13-29. The fair will continue its tradition of kicking off the night before, 5 to 10 p.m., Thurs., Jan. 12, with its popular Ride-A-Thon.

In addition to the usual fried fair food, there will be New Orleans cuisine, including fried catfish and boiled crawfish. Chef Landry, who hails from Louisiana, also will entertain audiences by bringing an interactive show of Cajun cooking, stories, jokes and authentic bayou cuisine.

The fair’s entertainment will include the legendary Dr. John, a six-time Grammy Award-winning musician and Rock & Roll Hall of Fame inductee. Known throughout the world as the embodiment of New Orleans, Dr. John is a true icon in American culture. His blend of snaky rhythms, Crescent City funk, and voodoo flair make him one of the city’s prime musical ambassadors.

The Preservation Hall Jazz Band, whose name is derived from the venerable Preservation Hall, located in New Orleans’ French Quarter, will bring the unmistakable sound of the Crescent City, performing its vibrant, enthralling, and irresistibly danceable style of New Orleans Jazz.

A number of New Orleans-styled bands also will perform. The band, Crawdaddio, brings the spirit and rhythm of the bayou to life with its driving zydeco beat. Funky Gumbo, a zesty, good time jazz band, will lift the audience’s spirits with toe tapping street­beats, familiar swing tunes, and New Orleans rhythm and blues. The Jazz Phools are devoted to the energetic performance of hot jazz of the 1920s and 1930s, Dixieland classics, and New Orleans second line jazz — all delivered with vintage flair. The Orlando-based band, The Porchdogs, has been known as “Florida’s Mardi Gras Band” since 1992. They specialize in Louisiana Cajun and zydeco, two styles of music that developed in southern Louisiana among the Cajun and Creole people.

Multiple ice skating shows themed “New Orleans on Ice” will take place daily and the fair will set up a replica of historic Jackson Square, one of the most popular attractions in New Orleans’ French Quarter, where local artists create artwork and show their work on the square’s iron fence while visitors enjoy nearby merchants, museums and restaurants.

Ghost tours will be conducted in Yesteryear Village every night at 9 p.m., Sunday through Thursday, and at 10 p.m., Friday and Saturday for an additional $10, which will include walking quietly through two on site houses and the bait and tackle shop where guests will hear stories about fishing accidents and New Orleans swamp stories. Perhaps they’ll even spot or hear a ghost weighing in!

Tickets for the Ride-A-Thon are $20 and $15 with a coupon, which will be available at the South Florida Fair’s booth during local community events and on the fair’s website, www.southfloridafair.com, starting Jan. 6.

Get ready. January will be a spectacular time to be in West Palm Beach to enjoy our own family-friendly fun Mardi Gras parade!

South Florida Mardi Gras will Feature Many Festive and Spectacular Events with Parades, Strands of Colorful Beads, and Big-Name Headliners Live in Concerts.