When it comes to the world of Electronic Dance Music (EDM), Steve Aoki is a household name. He is the founder of his own label, Dim Mak Records, subject and star of the 2015 documentary I’ll Sleep When I’m Dead, Billboard Awards winner for Best Mix Album, Grammy Awards nominee, and a three-time Guinness World Record holder; one of which is the record for the “longest crowd cheer.” His three albums, Wonderland (2012), Neon Future I (2014) and Neon Future II (2015) debuted at No. 6, No. 2 and No. 1 respectively on the US Dance/Electronic Album Billboard charts. Shows by Steve Aoki have become iconic through his trademark stunts including acrobatic crowd surfing, hurling cakes into the faces of screaming fans and drenching audiences with gallons of champagne.

In April 2016, Aoki joined over 55 other musical acts on the SunFest stages in West Palm Beach Waterfront. We caught up with him to learn what we can expect from his show and why it will be much more than just a cake in the face!

Many EDM fans cite you as their first exposure to the genre. What is it about your music and performances that attracts new audiences?
For the last 20 years, I’ve been doing my label, Dim Mak. All that time, even before I was a DJ, I’d been finding, signing and developing artists in many genres like hip-hop and rock. Now Dim Mak Records is immersed in electronic music, but back then, we signed [indie rock bands] Bloc Party and The Kills. Also, whenever I do an album, I reach out to people outside of the electronic community, like Linkin Park and Fallout Boy, and a lot of hip-hop artists like Kid Ink and Wakka Flocka Flame. So I feel like my sound and headspace are very diverse.

The bedrock of my music is in electronic but the channels and wingspan are far and broad. I sample guitar sometimes, or use 808s [a 1980s drum-mimicking synthesizer] and different sounds that emulate different things that aren’t particularity just electronic. So people that listen to rock, hip-hop and other genres might find a synergy because I do all those different collaborations. 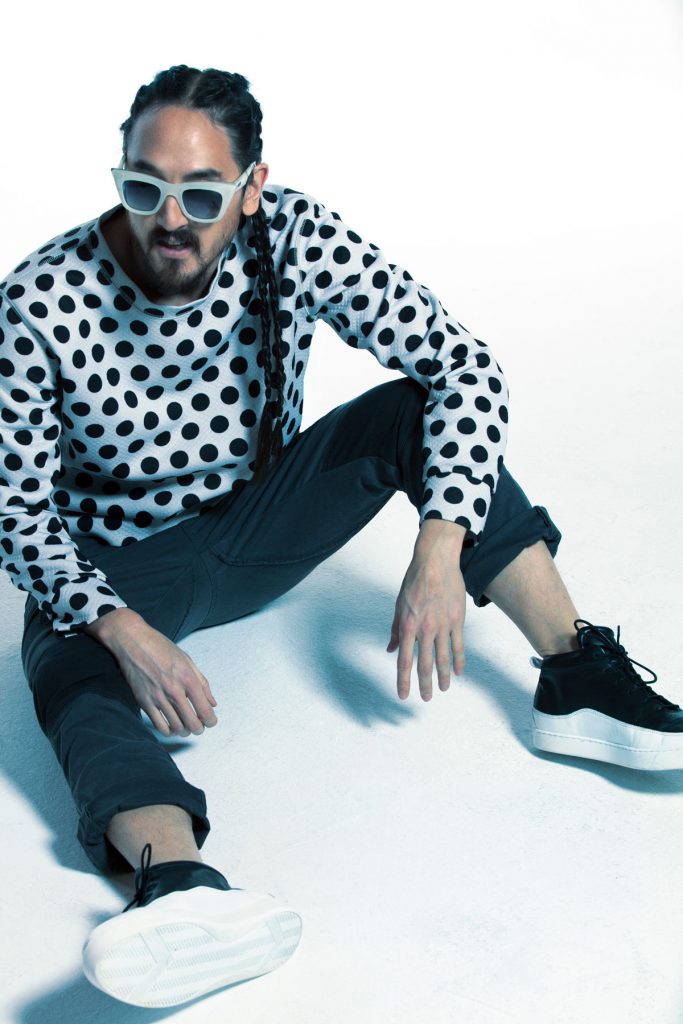 EDM has come a long way from geeky kids spinning records in dark corners. You’re well known for your engaging showmanship and the production quality of your sets. Can you explain this evolution of the DJ?
I started seeing that change when electro really came into being around 2007. I remember in 2007 when Daft Punk emerged with their live show and it blew people’s minds. We have to give them credit for really being the first spectacle performance from the electronic community that shook the world. It was like something you fell into and became hypnotized by their whole production.

And then Justice was, for me, the second artist that really had this rock ‘n’ roll punk spirit with their 2008 show at Coachella. Their production had this huge wall of Marshall amps and their sound was really distorted, loud and noisy and they had this punk attitude. People were going crazy; they were going off! I was definitely waving the flag for the whole new punk uprising in electronic music. I started sampling guitars, screaming on the mic and implementing the same processes of how I would go about being in a band but doing it as a DJ.

These artists gave me a platform and a forum to be able to do that because now there was an audience that wanted that kind of energy on stage. Years later, it has obviously evolved into what it is now, but that was kind of the springboard.

Your concerts are world famous for being gigantic parties with mammoth crowds and your dynamic stage presence. Can you explain why and how partying and the spectacle that comes with it became your trademark?
One of the hardest things to do is to find something unique that connects your fans to your music and your show. My aim or goal in my shows is to really connect with the crowd the best I can and the most efficient way possible with my short time on the stage. I do it through my dynamic shows, my music and the variations of what the music means to me. I introduced a raft to my show in 2009 and cake-facing was introduced in 2011. [Being hit in the face with a cake is a highly anticipated initiation into the inner circle of Aoki’s devoted fans.]

I’m not saying I’m the founder of the cakes – people have been throwing cakes at each other for a long time! But I’ve definitely made it a signature that is unique to a Steve Aoki show. I’ve probably caked like 8,000 people’s faces! And it’s fun and for me it doesn’t get old. I enjoy it because every cake face is a different cake face.

How does performing at SunFest – a festival with a wide genre of musical acts – differ from EDM-only events, such as Tomorrowland?
Mixed-genre festivals are a different vibe, they’re a different beast altogether. When I look out into the crowd, I know there are a lot of people that have never seen me before and that’s exciting. They’re asking, “why is a DJ up there on a stage? There are no instruments, he’s not a band, it doesn’t make sense to me.” To that, I say, ‘well perfect! Come to my show, check it out and see for yourself!’ I love when I get to do festivals, like SunFest, Coachella and Lollapalooza and play alongside bands, artists and all kinds of people from different genres. At SunFest, I’ll be playing all kinds of stuff that will represent Steve Aoki to an audience that is not necessarily electronic, and that will be a different set to say Tomorrowland.

Are there any particular acts you’re personally looked forward to at SunFest?
I loved G Eazy and The Roots. And I’m a massive Death Cab fan! Also, Duran Duran, I’m an 80s baby and I grew up listening to them! [Steve Aoki has previously performed with Duran Duran and remixed their hit, ‘Hungry like the Wolf’]. As much as it was just a remix, ‘Hungry like the Wolf’ felt more like working with a band on one of my album tracks because I was on the phone with them, talking with them, going over what I was doing and explaining my process to them. They were really involved with my remix. It was really cool because I was able to work with them in that capacity.

Being born in Miami and having been involved in local festivals such as Ultra and Life in Color, what is your expert opinion on the EDM scene in South Florida?
South Florida is definitely a major satellite for American crowds for electronic music. You have Southern California, New York, Chicago, even San Francisco has a huge scene, but South Florida has a really significant amount of people that listen to electronic music. It’s a very healthy environment for us to play our music in and know that we’re being represented and that people care about what we’re doing. I play in Florida a lot! I practically live in STORY [a nightclub in Miami]. I play there every three months; outside of Las Vegas and Ibiza, it’s my only residency in the world. I come to South Florida so much because there is so much interest in electronic music and I repeatedly have incredibly packed high-energy shows.

Chef Clay Conley: Enjoying the flare of the flame

You’re well known for your philanthropic ventures, EDM.com even named Steve Aoki as No. 1 on their list of the most charitable EDM producers. Can you tell us a bit about your charitable fund and any projects you’re really passionate about right now?
I like to give back to organizations that are doing really great work through the Steve Aoki Charitable Fund. What we’re focusing on now is brain-researched awareness and health. So I’ve been meeting up with different centers and we’re mainly focusing on one; The Lou Ruvo Center for Brain Health – they are incredible! We have a list of different organizations and research facilities that we donate to and that are finding ways to understand the brain. It’s something that connects with my music through the whole Neon Future theme that I’ve been doing for the last two years; science and technology and converging that with our humanity.

We just raised some money for SENS; their whole mission is to understand cells and cellular degeneration. If we can understand that and learn how to reverse cells from degenerating or overpopulating or mutating, we could essentially live forever. So there is a lot of interesting science fiction that could eventually become science fact.

Speaking of the future, any predictions on who will be the next big thing in EDM?
I just produced this new kid called Lil Uzi Vert, who is just a killer on the mic. He is one of the future young guns that are really pioneering the sound.

Steve Aoki perfromed in SunFest Friday night, April 29 at the Ford Stage, from 9:30pm until 11pm. SunFest takes place along the Intracoastal Waterway in downtown West Palm Beach every year at the end of April or first week of May. Full event information is always available at SunFest website and VisitWPB.

Read a Recent Interview with Steve Aoki, one of the Main Headliners to SunFest 2016 in West Palm Beach. Check Also Photos and Music from Steve Aoki.

Chef Clay Conley: Enjoying the flare of the flame