Watching Giannina Dwin work is pure meditation. She is a rare artist in that her work is impermanent and is about the transitory nature of life. She creates images from elements – mostly salt but sometimes sugar and spices, that speak of the nature of feminine energy, of the changing tides, of wind and lace and the cosmos. After spending days, sometimes weeks creating the work on the floor, it is ceremoniously destroyed or “transformed” back into the pile of condiment it started as.

Kneeling reverentially on a velvet pillow before a large rectangular base on the floor of the Hollywood Art and Culture Center, she uses a hair color squeeze bottle to trickle out thin streams of granulated salt to form a picture of the universe. Stars and whirls of vapor spiral around planets, incredible detail is paid to make sculptural mounds. It’s painstaking work that a whiff of breeze or a careless swipe of a hand could destroy in an instant.

“My work is conceptual,” Dwin says sitting in the small courtyard of the Art Center while a fountain bubbles noisily in the background. “The message is that we are not permanent, life is fragile. As a mother and a woman these are the big issues to me.”

Dwin is from Ecuador and was initially making paintings but felt compelled to dig deeper into the real stuff of life.

“I was taking care of my family and food is the most basic thing. The body carries life, needs nourishment to sustain it. The body is water, the body is salt. So I just started using this basic material to make art. I started making rugs, lingerie. I used red chile powder to make underwear. Granulated sugar works best, powdered sugar is the worst, way too messy. It all links back to a lot of traditions but it’s not religious.”

Tribal art and Asian mandalas have long been made of colored sands, an impermanent art as old as time. But Dwin prefers to tell stories of female nature, then dance on top of the piece barefoot to destroy it. The piece is well documented before being transformed with photos and videos that transform it into yet another kind of art. Lately she has been using drones to get shots from directly above the work as it is impossible to stand over the large sprawling pieces. Then she takes the salt and returns it to the ocean, or mixes the sugar into a drink and has viewers consume it. Yet another transformation back into the body.

“The destroying ritual is as important as the piece,” she says. “It is a solemn, quiet, transforming thing. I get very emotional during this, I wear a special dress, dance on the piece, sprinkle the work with water, or sweep into piles. It goes back to where it came or out into the audience it was created for.”

Salt as a material is unusual, in history it became an important article of trade and was transported by boat across the Mediterranean Sea, along specially built salt roads, and across the Sahara in camel caravans. The scarcity and universal need for salt led nations to go to war over salt and use it to raise tax revenues. Sugar was also a rare commodity for many continents and was a valued currency.

Dwin recently completed her largest piece to date at the Warehouse District in West Palm Beach for the one night only Art Unleashed Fair. It’s called “Deniers” and is of waves of water washing ashore across the floor. 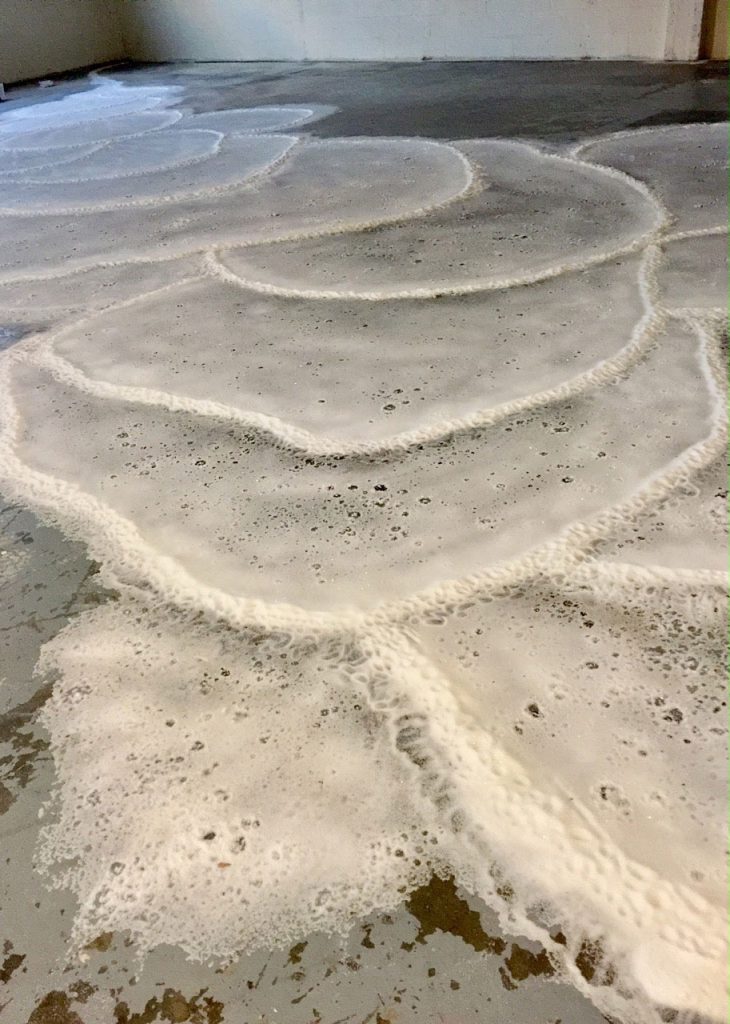 The level of detail is astonishing, she captures how the sea spray lands on sand and the bubbles that pop after a wave has receded. It’s 60 feet long and almost 30 feet across and will be destroyed at the end of opening night.

“It was a bit scary to work in that raw warehouse alone,” she says of the new space. “But to do a piece that large was exciting.”

She makes her own tools out of toothpicks, pencils, wood, brushes, bottles “Whatever works” she says with a laugh. ”It’s hard work physically to kneel this long but it’s good for my mind to do this work, it’s very meditative, like a prayer.”

She does a lot of research to find the images looking through books and online photos. Then she chooses the material based on “following the image.” The actual process starts with a drawing, then she marks the outlines with chalk on the actual surface. A circle has to be a perfect circle.

Dwin has been the recipient of several grants and awards such as the prestigious South Florida Cultural Consortium Fellowship for Visual and Media Artists, the Women in the Visual Arts Award; as well as, several sponsorships and grants including research in Spain and Brazil. Her work has been included in national and international exhibitions as part of solo and group shows.   Some of her more notable exhibitions include solo installations at the Project Space in The Art and Culture Center in Hollywood, the contemporary wing of the Museo Municipal de Guayaquil, Ecuador; Ornare, Miami, as a collateral event during Art Basel; the Coral Springs Museum of Art, Coral Springs; and Illegal Gallery, Florence, Italy.

Selected group shows include venues such as the University Galleries, Boca Raton; Whitespace at the Mordes Collection, 18 Rabbit Gallery, Ft. Lauderdale. Dwin has also curated exhibitions at Contemporary Ceramics and Textiles at the Coral Springs Museum, Corporal at the Schmidt Galleries, Fabricated, at FC Gallery.  She has completed a public art sculpture commissioned by the Broward County Cultural Council and the Broward County Main Library in Ft. Lauderdale.  Some of her past public works include an outdoor sculpture for the Cultural Loop at Pineapple Grove in Delray Beach and an Office Depot commission to design and execute their Visionary Women Award in bronze.

“My work is not in any way morally related in purpose to the concerns of the after-life or judgment,” she said in a statement. “It merely hopes to elicit analysis of the transient nature of the human condition and comments on gender issues and the fragility of life in general. It is a sort of contemporary Memento Mori.”

Other works by Gianinna Dwin

Her cosmos pieces is on display as part of the 8th All-Media Juried Biennial at the Art and Culture Center Hollywood, 1650 Harrison Street, Hollywood, FL.

For more on works, visit www.gianninadwin.com