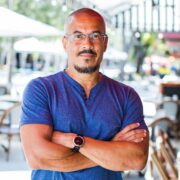 The SunFest lineup is always a hard task when it comes to pleasing everyone but this year, let’s admit, it was a mix of pretty much everything: Don Omar, Ludacris, Diplo, Tears for Fears, Papa Roach, Bebe Rexha, G-Eazy, Lil Dicky, Earth, Wind & Fire, OneRepublic, and Keith Urban among many more.

A well-rounded collection of big-name musicians propped by some great South Florida bands like our very own Spred the Dub and Citizen Badger.

SunFest music acts were at their best on Friday and Saturday.

G-Eazy returned to the main stage on Friday after a couple of years when, back in 2016, he had an epic performance in the midst of an elaborate set with a motel, a bar and a gentleman’s club flashing neon lights.

The California rapper loomed large on the stage delivering a set list that kept his audience interested all the way through. Overall, G-Eazy delivered, which is what I expected. His whole performance was energetic and flowed together smoothly.

And how do you describe a Papa Roach live concert? Electrifying.

This band that has been a trendsetter for rock music across the globe brought an energizing vibe on Friday to the SunFest’s Tire Kingdom Stage with crunchy guitar riffs, catchy hooks and infectious melodies. Every song had the right effect on the crowd that came to see them.

But this year’s most impressive act for me was Bebe Rexha. True to her Instagram’s profile —rock star not a pop star— she moved the crowd on Sunday to a highly entertaining afternoon at a fully-filled Meyer Amphitheater under the sun.

Her songs might be about her being a mess, but she’s anything but. Here’s the proof!

It was her first concert and she loved “knees” so I brought her up on stage to sing it with me. 💓

SunFest always goes on rain or shine. But that doesn’t mean some gigs won’t be delayed, postponed or canceled due to inclement weather.

That was the case of “Tears for Fears.”

The English pop rock band’s performance had to be cancelled because bad weather created unsafe conditions at the southend stage. The news came as a shocker and a little bit of a disappointment for most fans waiting to enjoy music from their unassuming-hometown-of-Bath legends.

But bad as the weather was this year, the festival had a happy ending: Keith Urban.

Due to Sunday’s airport closures, Urban’s plane couldn’t land at Palm Beach International Airport and ended up being diverted to Miami where they were also welcomed with lightnings and rain. But the country megastar didn’t flinch over pouring rain; took an Uber, drove all the way from Miami to West Palm Beach, and shone on the Ford stage, giving a terrific concert that started almost two hours after scheduled time. But it was worth all the wait.

His social media posts, in which he tagged SunFest, went viral and of course, gave the concert —and SunFest— national attention.

Most likely, next year there’ll be other awesome stories to tell besides the rain.