After nine days of continuous events throughout Palm Beach county, the SuperCar Week Sunday Show in 2016 came to an end. Just when it was starting to get better around noon, the rain set in for a long stretch of time. But the downpour was good enough to refresh and make us enjoy a stupendous afternoon with roaring engines, automobiles new and old, rare models by different manufactures, food, drink, music and lots of friendly people gathered by West Palm Beach waterfront.

The SuperCar Week Sunday Show took place along Flagler Drive from Lake Ave to Banyan Blvd. It provided a full range of entertainment to local car enthusiasts and visitors who came to celebrate the 5th annual edition of SuperCar Week, the largest event in South Florida dedicated to the art and technology of speed and design, featuring he classics, hot rods, sports vehicles, motorcycles, custom vehicles, speed boats and many others more.

This event brought back memories for some and created dreams for others. SuperCar Week Sunday show always draws a large crowd. This year, there were manufacturers, collectors, proud owners and vehicles on display, from Ford and Chevrolet to Rolls-Royce, Maserati and Ferrari.  There were jaw dropping cars, some of them so highly polished and fantastically designed it’s hard to believe they actually drive on the roads. On display was a Batmobile, cars with jokes written on them, race cars so low to the ground there was barely an inch to spare. Also, hoods that raised up from the front, luxe leather interiors too good to sit on, and exclamations of Wow! and Holy Moly! everywhere.

When you listen to this young Rock band kick things off, you realize they are destined for greatness. Music is their passion and they are living a dream, performing powerful gigs at major events in Palm Beach County and all over the State. Last year, Krush won Clematis by Night Battle of the Bands as the city celebrated the 20th anniversary of this public party. Seriously, they are top-notch stuff; to the extent that they have been opening for some big names including Def Leppard, Styx and Tesla, Melissa Etheridge, Montgomery Gentry, Smash Mouth, and Heffron Drive. 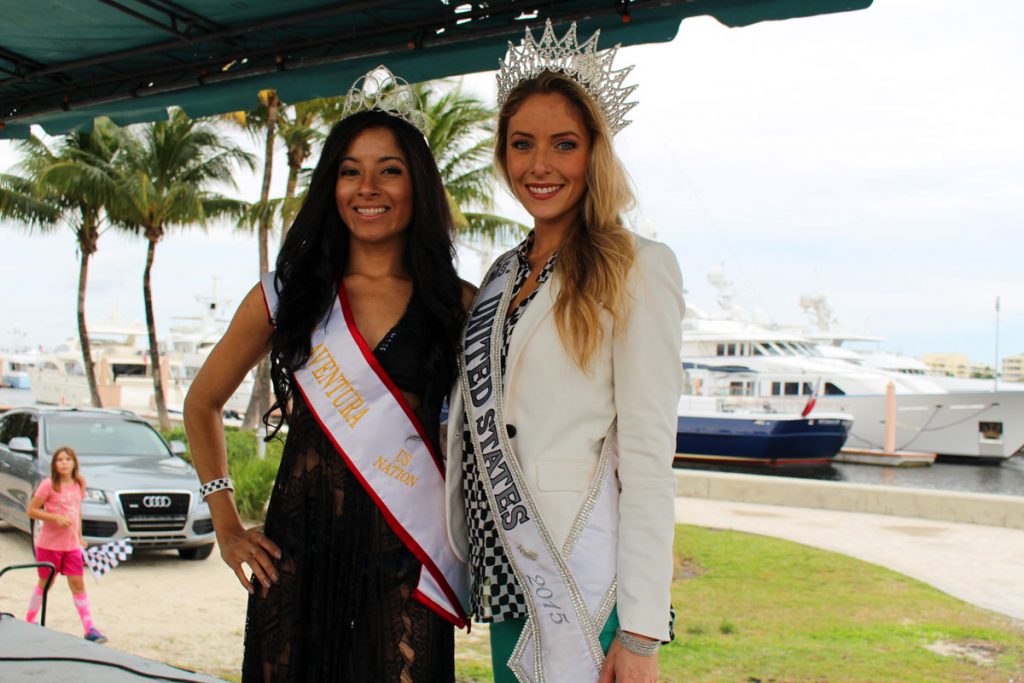 Florida native Celine Pelofi who was crowned Ms. United States on July 3, 2015, was at the event. She is now brand ambassador representing luxury car brands such as Braman Bentley, BMW Jupiter, BMW West Palm Beach, MINI, Porsche and Rolls-Royce in Palm Beach County. Next to her, Pamela Feliz, who represents The City of Aventura through Miss Us Nations. She participated in West Palm Beach Swim Week 2015. There she was selected by Designer Dyanna Rosemary, Despi and Stscarves.

Vivid Colors of the Exhibit 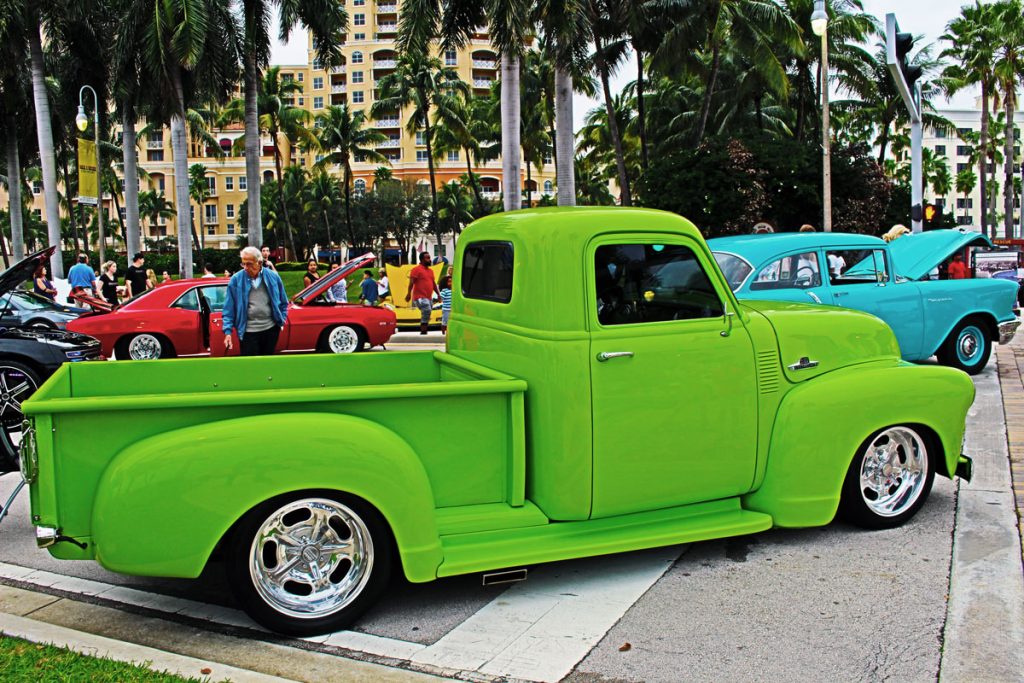 Though it was a grey day on Sunday, January 10th, this photo was taken mainly to combine the vivid colors that beautifully painted cars can flaunt, even way after the course of the years.

Russia Made it to the SuperCar Week 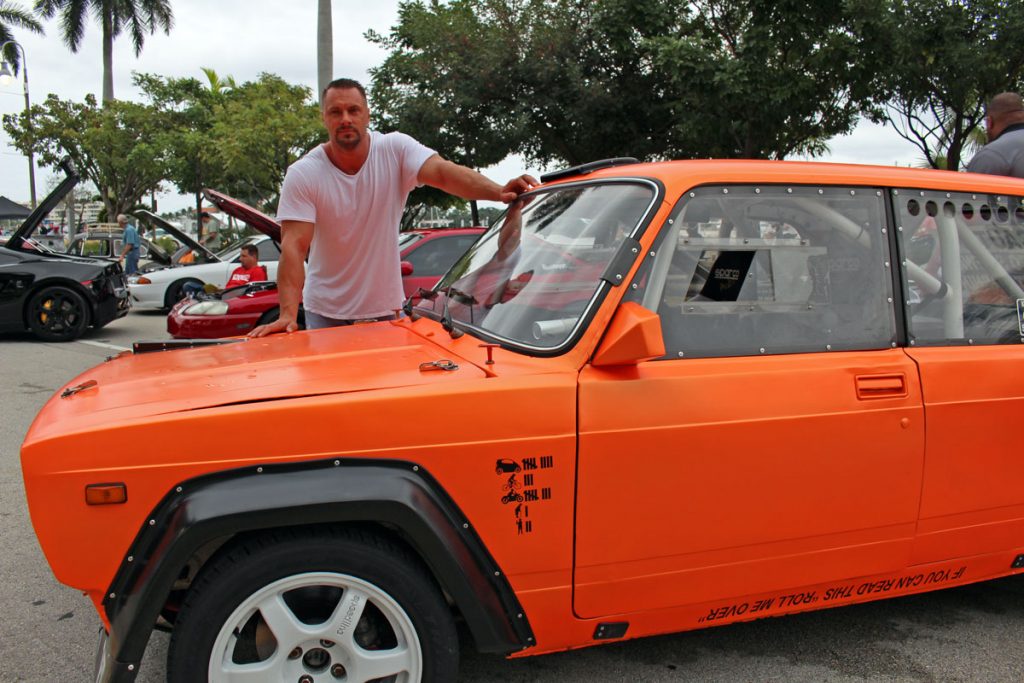 Zoltan Csipai, proud owner of a Lada Vfts Russian Rally Race car, was also present at the SuperCar Week Sunday Show. This rare car for many Americans has a 1.6 liter 4 cylinder racing engine with 2 45 Weber carburetors in it. Zoltan brought this car to West Palm Beach from his native country Hungary where he used to race with them. Now Csipai is in the process of building a hard clay dirt rally race track in Palm Beach County, and plans to bring 10 to 15 Lada Vfts just like this one. Car enthusiasts will be able to rent them. His Lada is a 1987 model.

SuperCar Week Sunday Show also featured a VIP “Tent” which was inside the Lake View Pavilion of WPB Downtown, part of the City Commons and Waterfront Promenade area. The Pavilion offered a picturesque and comfortable setting in the event for all those who wanted to chill over different cocktails, DJ music by Palm Beach FM and plenty of light food to snack on.

During the event, BMX All Star bike riders did stunts on the ramp set up in the middle of the street, pedaling fast and doing flips straight up in the air. Daring stuff and they made it look so easy.

Out in the water there were impossible looking new modes of transport as well, and the SoFlo Flyboards zipped into the air. This is an unbelievable new sport – the Flyboard was just created in 2011 by Zapata Racing. The board, which looks like a sideways skateboard, is strapped to the feet of the user and is connected to a jet ski by a hose.  The power of the jet ski propels the water through the hose that shoots out in two streams below the Flyboard allowing the really brave user to fly upwards of 30 to 35 feet above the water really fast.  This seems to be all done with the movements of the feet and legs, there are attachments that do allow the users to control the power of the Flyboard from their hands but this is done by someone who has more experience. It’s amazing to watch how quickly the board goes up and down and rights itself like a cat that always lands feet first.

Taking a stroll down to the food trucks at the SuperCar Week Sunday Show, Sandra Schulman was happy to see a Cherokee food truck called Unto These Grills as she is a quarter Cherokee. The authentic menu, with buffalo, deer, elk and frybread, was written in both English and Cherokee language and is authentic with recipes out of the Carolina reservations. Beautiful graphics on the truck too. There was also an organic ice cream truck with a long line, and the usual BBQ, fried stuff truck, and cold fruit juice trucks. A man blowing giant bubbles had the kids enthralled as a DJ spun pounding dance music after Krush finished performing.

Regardless of the inclement weather, SuperCar Week Sunday Show was a great day for the whole family to enjoy, with DJs, street vendors, food trucks and VIP stands in beautiful Downtown WPB. Only a short walk away, there was plenty to enjoy at many restaurants in Clematis St, with Lynora’s leading the pack with music and mimosas and Duffy’s Sports Bar welcoming all car enthusiasts who wouldn’t skip the NFL’s Playoff games of the afternoon, not even for a car show.

And if you missed the show or left earlier because of the rain, we’ll see you early next year. Don’t worry, time flies by!