Metal is in the local news lately, with aluminum, steel and bronze doing some heavy lifting both up and out. The Cultural Council of Palm Beach County have beautiful headquarters in downtown Lake Worth in the form of a renovated, art deco building that houses their offices as well as art galleries. They have a current show up from international sculptor Alexander Krivoshiew, whose highly polished, swooping abstract designs grace everything from small tabletop sculptures to large commissions for outdoor plazas.

Born in New York in 1976, Krivoshiew holds a BA with honors degree in sculpture from the School of Visual Arts. His interest is sculpture was piqued through studies in Greek mythology, archaeology, and social anthropology, as he lived and apprenticed in Crete, Greece for seven years. After moving back to the US he began working in metals. Metal usually begs to work larger, as he outgrew his cramped Brooklyn studio he found himself in West Palm Beach where space is much more freely available to make his large-scale metal works.

Alexander Krivosheiw is an artist of

Alexander has earned praise from such pros as Long Island sculptor Hans Van de Bovenkamp, who said “Alexander Krivosheiw is an artist of vision and passion. His ideas are of a mature artist, and the craftsmanship is extraordinary; in both casting and fabrication. I feel as though his career is unfolding on a global level and he is truly an artist to watch.” Working in steel, aluminum and bronze, Krivoshiew has arrived at a unique, fluidly abstract style in his work, turning human, animal and even graphic forms into sleek, tapered, interactive shapes. His studio is located in an upscale warehouse bay in the Lake Worth area, the front office is orderly and designed as a business/ computer design area. There are drawings and sketches and photos covering the walls, tracing the process of his work. Press clippings line the walls next to glass enclosed display cases that hold some smaller tabletop sculptures.

Handsome and well-spoken, Krivoshiew rides to work on his custom welded motorcycle and parks it in the large back bay under a fan he designed with blades that look like airplane wings. His workshop has large cutting, grinding and polishing machines; tables are laid out with pieces of works in progress. Big sheets of metal lean against the walls, ready to be cut and shaped into sculptural forms.

One of his current projects is a sculpture of the interlocking rings of the Olympics, commissioned by the Olympic Committee itself. Krivoshiew has taken the circular shapes to an extreme, blending and stretching them as if they were made of ripples of water instead of cold hard steel.

The story of how the commission came about is just as unusual – Krivoshiew ran an ad in a Florida design magazine, as he works with many interior designers and architects, that found its way onto a plane flying to Switzerland. After the plane landed and took off again, the passenger in that particular seat with the magazine tucked into the front pocket happened to be a member of the Olympic committee based in Switzerland searching for sculptors to re-envision the famous official logo.

He is also experimenting with human forms – a new piece is based on a reclining nude; small tabletop sculptures look like standing figures or perhaps bird like totems. Mass production is another new element of his work, a whole different design thought process as the sculpture needs to be made in sections for multiple castings.

“I’m also interested in functional pieces, useable design,” he says, pointing out the large overhead fan with aluminum propeller shaped blades, and the racy motorcycle he designed with a sleek pod shaped tank and radical shaped exhaust tubes that flare at the ends.
Krivoshiew will soon unveil a major-league large scale commission, a 20-foot bronze sculpture to be unveiled later this year at a luxury residential complex in Taiwan.
The Cultural Council, founded in 1978 as a non-profit organization through the vision and leadership of Alexander Dreyfoos, a successful business owner and activist, is a great source to see and find out about artists like Krivoshiew. There’s also a shop in the Council’s headquarters filled with artist made crafts and an information area stocked with brochures and magazines from all the different arts groups in the area including dance, film and music.

From building up to tearing down, the story making national headlines this past week is pretty unbelievable – The Palm Beach Opera scrapped its plans to build an opera house along with a very expensive sculpture – estimated at half a million dollars – that stood on their property at the prime corner of Okeechobee Boulevard and Lakeview Avenue. It’s still not clear why the piece that stood there for years and then was stored when the land was sold for $16 million was carted off for scrap. It must have been a major miscommunication somewhere along the way and the Opera isn’t talking just yet. 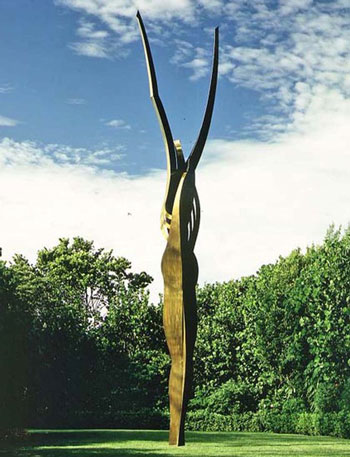 The sculptor is suing under the Artists Visual Rights Act, a little known law which protects artists work from being destroyed without the artist’s permission. The large graceful 39-foot tall bronze sculpture called Spirit Ascending was by John Raimondi of a standing figure, arms reaching to the heavens. Raimondi was commissioned to create the sculpture in 1995 by Palm Beach philanthropist Lois Pope, who later donated it to the Opera.
When the Operas development stalled, Raimondi said he had offered to buy the work himself for $50,000 but the Opera refused, saying they wanted the full appraised value of $350,000 (it’s higher now, closer to $500,000.)

Those plans went big metal bust, however, during the recession around 2008 and the Opera sold the land. The sculpture went into storage. Raimondi found out during a casual lunch recently when a friend told him the sculpture had been dismantled and sold for scrap last year. “This is the opera, they are supposed to be preserving the arts!” Raimondi said in frustration. If any good will come of this, it’s awareness of artists rights and how fragile something even as tough as metal can be.

Heavy Metal: The Art of Building Up and Tearing Down. Review of Current Show by sculptor Alexander Krivoshiew at the Cultural Council of Palm Beach County.