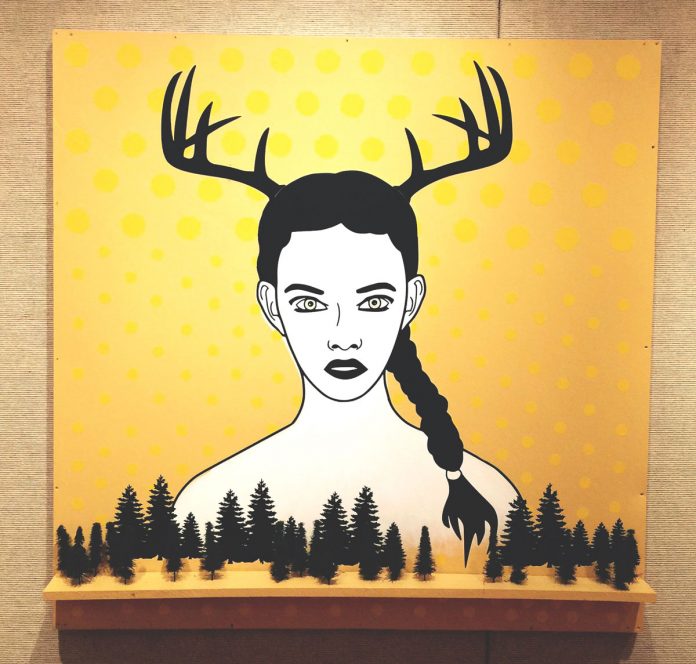 The Eco-Art of Birds Are Nice

View from the Harvey is a Weekly column by Sandra Schulman, arts writer, music and film producer.

There’s a powerful, seemingly playful, cautionary tale of a show on exhibit at Palm Beach State College’ Eissey Gallery called Misunderstood: Art Looks at the Anthropocene by artist Diane Arrieta who goes by the moniker Birds Are Nice.

The exhibition deals with the plight of animals, ecosystems and their struggle with humans. It runs through Oct. 16. The images she uses at first appear graphic and cartoonish, but then odd, disturbing symbols began to seep through – the color yellow stands for caution, red is endangered nature, black is death.

This interdisciplinary artist, who lives and works in Palm Beach County, utilizes various printmaking techniques with cut vinyl, illustration, sculpture and animation. The work has a distinct urban feel, with a style rooted in the comic book genre, but also has strong influences from artist like Robert Rauschenberg, Jasper Johns and Daisy Youngblood.
Her images and multi-media pieces that combine graphics, painting and sculpture are used as a communication tools for raising awareness of biological concepts related to biodiversity, species loss, habitat degradation and the relationship of these things to human health and well-being. In Florida we feel these things all around us, watching storms ravage shorelines and wetlands, seeing turtle nests roped off on beaches to protect the fragile eggs.

Having Native American roots and Taoist beliefs, Diane Arrieta focuses on “an ecocentric mindset that places nature and animals above humans.” She utilizes materials and certain processes that are normally used for commercial and industrial purposes as her unique way of turning consumer based items on their heads into works of art that speak about the environment. Parallel to the ecological topics, much of her work focuses on social-political issues.

In an email chat I asked her about the inspiration for this show. “I just spent the last few years getting my master’s degree in wildlife health, so these are the topics we were studying,” she wrote. “Habitat fragmentation, species loss, transboundary disease, human disease, climate change and how it affects wildlife. We also had science communication and learned how important it is to relate these topics to human health and well being…and the psychology of conservation.”

As for how she chooses her imagery she says “I read a lot of science journals, watch nature TV, etc. whatever topic interests me, I start trying to decide the best way to relay that to the public. I’m not sure how to answer this as my ideas and basic sketch ideas of the work pop into my head. Then I have to decide, like do I need an image of a child, or a panda, or whatever. I have good recall and remember images from many sources, then the process begins. When I see an interesting person or animal, I save those images to use later. Once I get an idea, my images come from many long hours looking for internet photos to use as reference that best fits my idea; along with family or friends photos. I sketch elements from many different images until I get what I want. I sketch by hand, until I get the basic figures and idea mapped out; then draw the final work digitally.”
Children and childlike images are a reoccurring theme in the works of Birds Are Nice (BAN). Nietzsche said, “The child is innocence and forgetting, a new beginning, a sport, a self-propelling wheel, a Sacred Yes”. BAN’s work strives for the simplicity of that childhood innocence.

Arrieta states “This exhibition deals with the plight of animals, ecosystems and their struggle with humans. Living off of consumer based, human-centric treatment of the planet for decades, we are now faced with real dilemmas facing our basic health and well-being. Unregulated abuse, habitat fragmentation, and urban sprawl are among the many problems that are fueling extreme weather patterns, climate change, unprecedented species extinction rates, and an increasing rise of infectious disease prevalence. Humans tend to think of nature as distant and not part of their everyday lives. The fast paced lives that rely on disposable items, fast food restaurants and being confined in closed workspaces, increases the gap between humans and nature. The most common misconception that we as humans have about nature is that it is not under control of humans. Once we intervene, it becomes part of our world. There is a lack of understanding to the complexities of biodiversity. People are still influenced by outdated views of nature and its ability to restore itself.”

I particularly like the piece Oh Deer, made of acrylic and cut vinyl on a wood panel with small wire trees lining the bottom of the frame. Meant to bring attention to the tiny, fragile Key Deer, of which only less than a thousand remain, the frightened deer in the headlights look on the face of the woman with black antlers against an acid yellow background tells the horror of the little deer’s hooved plight.

Another piece, also in yellow called My Kingdom Ain’t So Magic shows a comical furry bear wearing Mickey Mouse ears while standing in a box on wheels plastered with a generic house graphic. Arrows shoot out from all sides on the floor. The newspapers lately have been blaring headlines about new ordinances to allow shooting the Florida Black Bear, which resides in the same North Central Florida areas – and Disney’s Magic Kingdom – that new housing developments are cropping up, putting people and bears in too close for comfort contact. When that happens, the bears will most certainly lose.

Arrieta says “We need to step up and be heroes for the environment. We can either be hero or villain when it comes to the planet.”

While Birds may be nice, the message this artist is sending is anything but nice, with fear for the planet taking alarmed flight.

The Eco-Art of Birds Are Nice. While Birds may be nice, Diane Arrieta is sending message is anything but nice with fear for the planet taking alarmed flight

After a hiatus, the PBIBS got back on the water better...