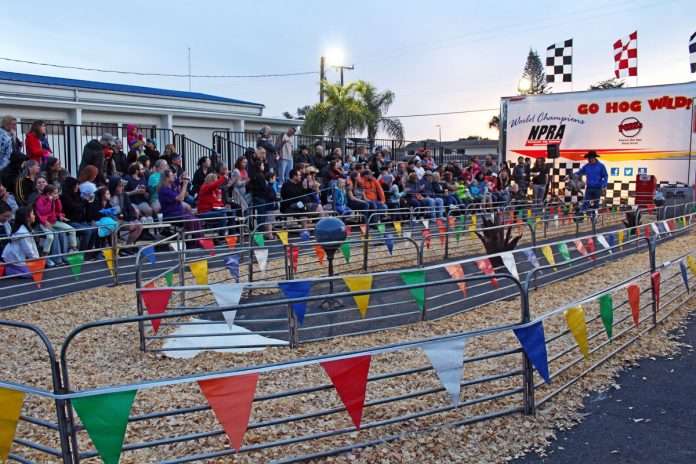 When we say that the South Florida Fair has something for everyone, we mean it! I just witnessed the swiftest swines race at the South Florida’s mini version of a Daytona’s race track where everyone wants to see little swines go head to head for the coveted prize: an Oreo Cookie! The Hambone Express Show, the swiftest swines race to have ever taken place in Palm Beach County, is a great family entertainment.

This year, one of the most suggested attractions at the Fair is definitively the Swiftest Swines Race show by the Boger family who really put on a highly entertaining act. Charlie Boger keeps you on edge since the beginning of the show, making you feel like you are at the most important boxing fight in the MGM Grand Garden Arena. Carol has the exacting task of handling the little pigs inside the trailer until they are ready to come and whoosh to the finish line for a handful of well-deserved Oreo cookies.

“If you haven’t seen the country’s swiftest swines race at the South Florida Fair, you have no idea of the show you’ve missed.”

Coming from Fayetteville, Arkansa, the Bogers family will undoubtedly entertain the audience with great excitement. The relatively small speedway is cozy enough for the audience to get exhilarated with its bright colors, sounds and squealing pitches of a first-class racing arena.

Four participants will be selected to act as cheerleaders of their teams as the audience is divided into four major groups to sponsor each little pig racing. And if they win, they will also become part of the entertainment as the swinemaster will come up with hilarious ideas to award the team leader after the race is over. Seriously, you will feel the excitement built around the race tracks during each swift-flying second of the competitions.

Check these photos of what the Hambone Express Show is about…

Definitely, the swiftest swines race show is a fan favorite in this year’s Fair! A great show to enjoy and kids will be thrilled to see how pigs can reach maximum velocity. Look for the South Florida Fair calendar of events, find the dates and hours the show is available; and cheer for the swiftest swines off the line.