A longtime Miami artist, Asser Saint-Val has taken up residency at Rosemary Square as New Wave’s current artist-in-residence. Be prepared to take a surreal dive into the subconscious with the multi-disciplinary artist, painter, sculptor, installation artist, graphic designer, and musician. His work has levels of neuromelanin and spirituality.

The abstract forms contain multitudes, with billowing shapes that hang in mid-air with legs and fabric and whorls and clouds and horizons that all may or not be what they seem.

Several completed paintings hang in the space alongside works in progress. His choice of materials is unusual, with chunks of sea salt, lemongrass, cinnamon sticks, coffee, and chocolate embedding themselves into the canvas that becomes sculptural.

“I’m interested in spirituality and how it all connects. I use spices for research. Foods have energy that affects the body. I like the pigment of caffeine, I make art with them to transform them, it is alchemy.”

Asser contrasts these rough surfaces with slick or matte plains. He wants viewers to get glimpses of the esoteric, the spirit realms of Egypt, Africa, and the back and forth interplay he creates.

“I am interested in spirituality and identity as a platform for self-consciousness,” he says. “To better understand myself, I became interested in researching Neuromelanin and then explored it through painting, sculptures, and multi-sensory interactive art installations. Dr. Richard King, a 21st-Century psychiatrist, believed that “on a philosophical plane, Neuromelanin is the biological doorway through which the life force of African spirituality passes in moving from the spirit to the material realm.” My fascination with melanin underscored a desire to understand the hidden sides of this substance.” 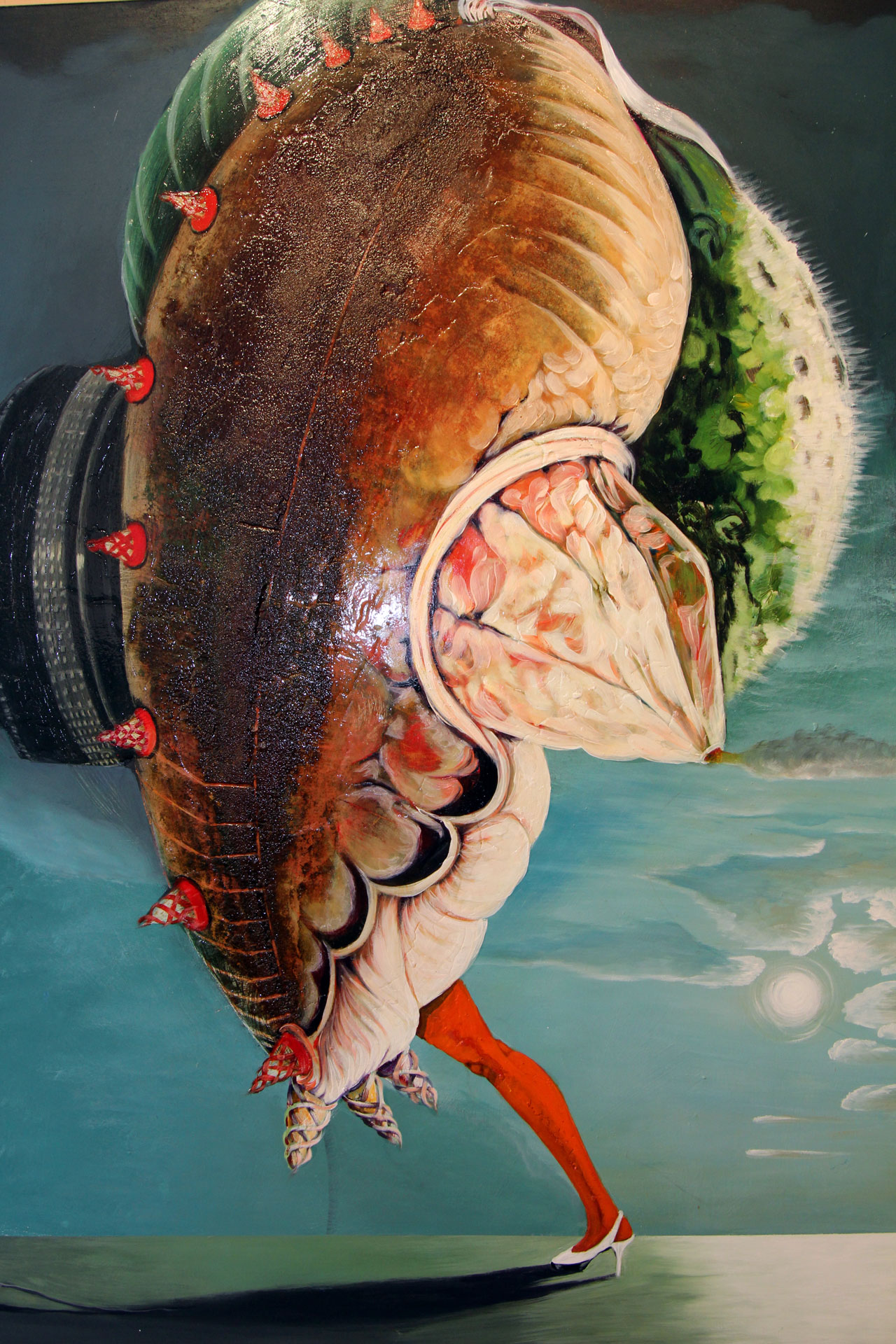 Neuromelanin is a pigment found specifically in the neurons of the human in the base of the brain. The 17th-Century French philosopher, mathematician, and scientist Rene Descartes claimed: “the pineal gland is the principal seat of the soul and the place in which all our thoughts are formed.”

“As a painter, I felt limited in how to convey the spirituality connection in Neuromelanin, so I branch into installations,” Asser says.

Through multi-sensory interactive art installations, he began to create “surreal fantasia which brings together ideas and incidents central to scientific debates about the spiritual and material realm. My intention with this evolving medium is to activate the audience’s imagination by creating a surreal environment where all the senses are engaged.” 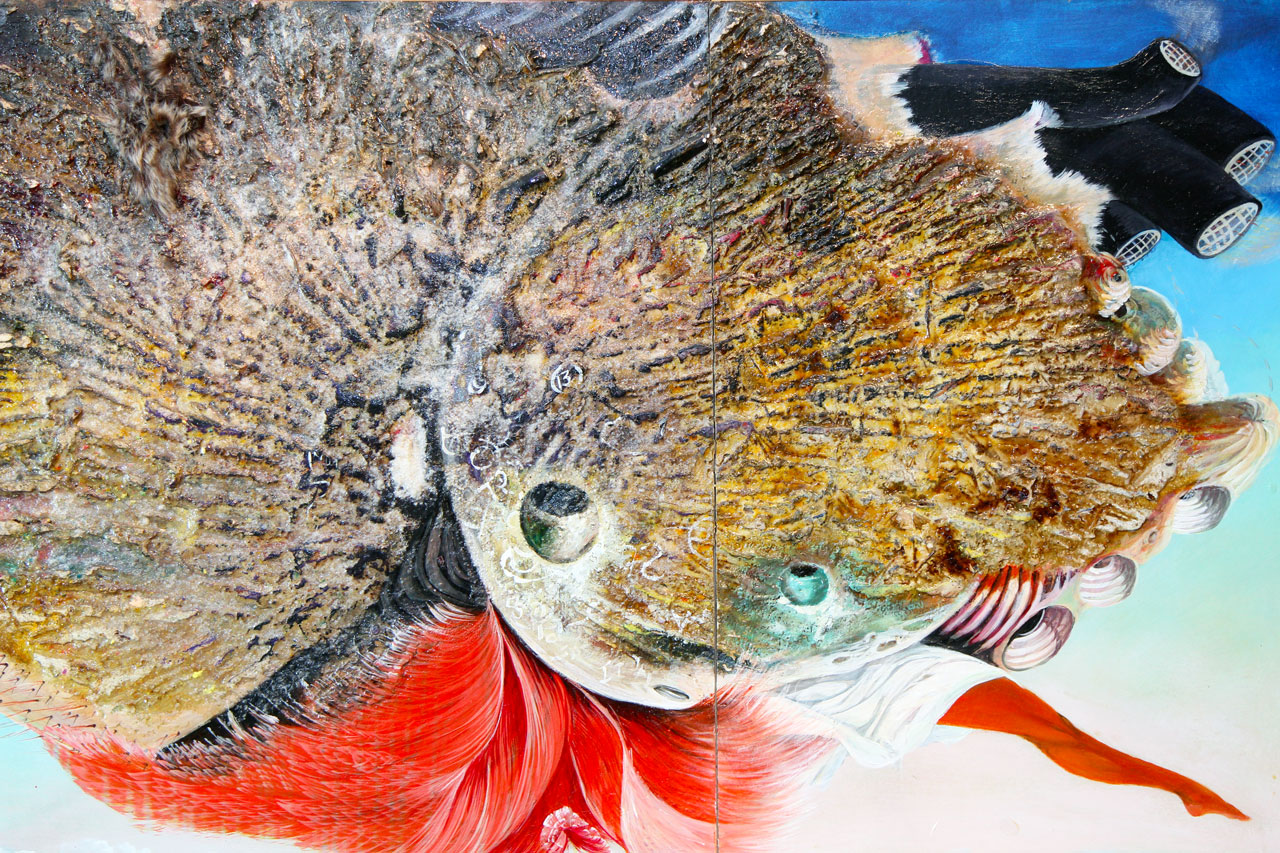 A recent work is titled Binduiam, a multi-sensory interactive art installation in collaboration with musician Paloma Dueñas and performance artist Lize-Lotte Pitlo. This installation consists of an air sculpture, queen size bed, binaural recording headphones, crystal bowls, aromas, food, and performance. To immerse in the work, viewers rest on the bed which is being hauled by an ambiguous sculpture at the headboard. While on the bed, participants wear a pair of binaural headphones playing a non-linear recording conversation in four languages.

Art experiences in bed? Count us in.

His forms come to him not in dreams but while fully awake connecting with the subconscious.

“It’s something I can’t identify,” he says. “This new period in my work has expanded my consciousness both socially and spiritually and the impact the installations have had on viewers has been described as an experience of transformation, magic, and self-awareness. I believe that the spiritual nature of Neuromelanin and its abilities to connect us to our higher being is a universal journey that connects us as human beings.”

His best audience though may be the recent group of 3rd graders that visited the studio.

“They were laughing, saying ‘wow are those chickens?? Bugs??’ Kids are very pure in their reactions.”

Saint-Val has had several solo and group shows and has received numerous awards. He earned BFAs in painting and graphic design from the New World School of the Arts and the University of Florida.

Asser Saint-Val will be the New Wave Artist-in-Residence at Rosemary Square from June 21 – August 2, an exhibit of the residency works takes place on August 27th.

To learn more about New Wave, visit www.newwave.art or check the artist’s website.