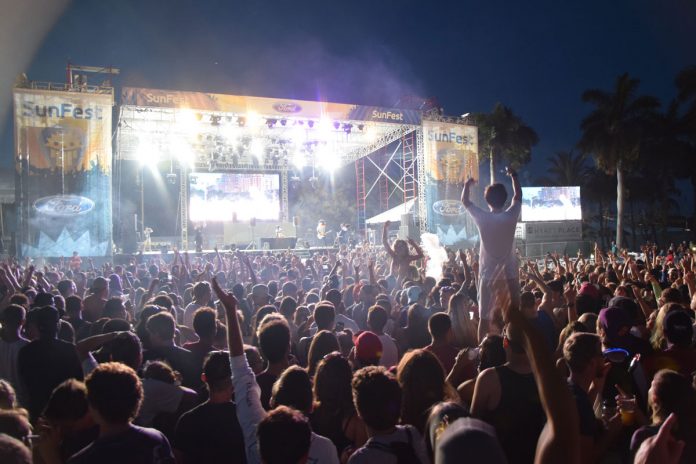 SunFest, Florida’s largest music, art and waterfront festival — and our very own ultimate 5-day fun spot to be at — will be held May 3-7 along the downtown West Palm Beach waterfront. SunFest 2017 lineup was announced February 15 and is kind of a doozy!

Now it is the time to get ready for SunFest. Admission prices are being offered at a decent discount here. So to make things easier for a decision, let’s break down some of the lineup headliners for this year.

This duo from Seattle, Washington, have become a premier international hip-hop act known for their electrifying live shows, expertly crafted music, and innovative music videos and media. They are famous for “Can’t Hold Us”, “Same Love”, a song and video in support of marriage equality, that galvanized young fans and voters and led to live studio performances on The Ellen DeGeneres Show. Since releasing The Heist, the duo has garnered attention in Rolling Stone, Billboard, NPR, TIME and GQ, with live performances on VH1, MTV, Late Night with Jimmy Fallon, Saturday Night Live, and the MTV Movie Awards.

This band was nominated for the best rock album in this year’s Grammy. Weezer consists of Rivers Cuomo (lead vocals, guitar), Patrick Wilson (drums), Brian Bell (guitar, backing vocals, keyboards), and Scott Shriner (bass guitar, backing vocals). As one of the most popular groups to emerge in the post-grunge alternative rock aftermath, they play alternative rock, power pop, pop punk, emo and indie rock. Many reviews for the White Album -Weezer’s latest album- have rightfully identified it as the band’s best work in a very long time.

Snoop returns to West Palm Beach, and this time on opening night. He began his music career in 1992 when he was discovered by Dr. Dre and since then, it has been a legend in the rap music industry. Snoop has mutated from a moral threat to a beloved entertainer. His work through more than 20 years has paved the way for a whole new era of hip-hop.

Coolaid is the fourteenth studio album by Snoop Dog and it has received positive reviews from music critics, who praised Snoop’s technical rapping abilities and production choices.

The night is served on a silver plate to a Florida’s local rapper. Many of the Miami-based rapper’s studio album hits have topped Billboard’s charts. Flo Rida has never fallen far from the pop sphere since 2007 single Low, which everyone had as their ringtone. Flo composes fun syncopated rhythms for himself and he recites them with ease when he performs.

Ziggy is a 5-time Grammy Award-winning reggae artist and eldest son of music icon, Bob Marley, and leader of the band, Ziggy Marley and the Melody Makers.

The burdens of becoming a second-generation star weighed heavily on Ziggy since the beginning — who looked and sounded almost eerily like his father — but when Marley & the Melody Makers recorded their masterpiece, 1988’s Conscious Party, their album was both a critical and commercial smash, with the single “Tomorrow People” reaching high on the pop charts. Ziggy Marley debuted his first solo album, Dragonfly on 15 April 2003. On July 2006 he released his second solo album and he won a Grammy Award for Best Reggae Album, making it Ziggy’s 4th Grammy win.

Marshmello’s identity remains unknown, although it has been heavily suggested he is American DJ Chris Comstock, also known as Dotcom. So you will come to SunFest to enjoy the mixes of a popular DJ whose musical style includes groove-oriented, synth and bass-heavy electronic dance music, who always appears wearing a full-head-covering marshmallow-shaped helmet. And SunFest will be no exception.

So, who is Marshmello? One thing is for sure. His giant cartoon marshmallow mask will be something EDM fans in the Palm Beaches will honestly never forget because his sound is original, and incredibly exciting.

Diehard 3 Doors Down fans? You know well that since The Better Life album, the band has been one of the biggest-selling bands of the 2000’s, going platinum four times during its first year of release and spawning several singles.

Sporting a new lineup, 3 Doors Down comes to SunFest ready to give a boundary-smashing, unforgettable performance that only a true expert rock band can stage. 3 Doors Down has been delivering one of rock’s most dynamic live shows for two decades with an extensive catalog of hits displaying their diversity as a band.

25 years in the making and still sounding fresh and entertaining. The California’s rock band has been one the most popular bands to emerge from the post-Green Day mainstream explosion of pop-punk. Now in their forties, Blink-182 is the band of all ages who has been honing a slaphappy version of punk rock, fast but surprisingly catchy. Blink-182 has helped encourage the next generation of punks to think big, not to settle for a subgenre, known for simple chord progressions and memorable tunes.

Blink-182’s California album was one of the most anticipated—and most successful—releases of 2016. Their new tracks are not only a solid addition to what was already released, but a good mix of sounds.

So, what’s your pick thus far?

Get ready for SunFest 2017 with more advice, tips, and suggestions here. We’ll keep featuring information, reviews, interviews and much more for you.

Norton’s Photography Curator Keeps his Eye on the Prize